Good for them! Relationships are hard to pull off in the wrestling industry. With wrestlers being on the road all the time, it does not leave them many opportunities for relationships of any kind. One of the only ways to make it work is if you are with someone also in wrestling, which is the case for multiple WWE wrestlers. Now one of them is engaged to someone else in the company.

The Women’s Revolution has been a complete game changer in WWE. What once was a joke and little more than a sideshow has turned into one of the most important and features parts of WWE programming. It isn’t just on the main roster either as NXT has seen its share of developments. This includes in referees, as NXT has had multiple female officiais. One of them had some great news today.

NXT referee Aja Smith and NXT North American Champion Leon Ruff are now engaged to be married, as announced on Smith’s Twitter. The two have been dating since at least May of this year, as Smith made a reference to getting to referee one of Ruff’s matches. Smith has been with WWE since February while Ruff came over once Evolve went out of business and officially signed in July.

Ruff has had a good year. Check out what he has been doing:

Opinion: That’s awesome to hear for the two of them and hopefully they have nothing but happiness. It’s also great to see the fact that having female referees in NXT is little more than a detail. When Jessika Carr was signed, it was treated like the big deal that it was. Now Smith is there as well and it is no longer a big deal because it is normal. That is how you make progress and hopefully we get more of it in the future.

What do you think of the two of them? How long will Ruff be champion? Let us know in the comments below.

PHOTO: Bayley Changes Up Her Look After Accomplishment 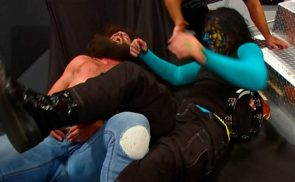