Maybe the first of many. WrestleMania 36 is officially in the books and that means things are going to be entering a new phase starting this week on Monday Night Raw. While that shoe marks something like the season premiere, WrestleMania was the season finale. That being said, there was still time to introduce someone new and that is exactly what they did here.

One of the most fascinating things about WWE is seeing someone get called up to the main roster for the first time. You never know when you might see something like this happening and that is what makes the moments so special. They may not be as common as they once were but when they are that special, they feel big. That was the case on Sunday night at WrestleMania.

During Night Two of WrestleMania 36, Bianca Belair interfered and seemed to make her full time main roster debut. Belair ran in to help the Street Profits fight off Zelina Vega, Angel Garza and Austin Theory after the Street Profits had successfully defended the Raw Tag Team Titles. Belair is married to Montez Ford and was sat on the Street Profits’ shoulders after the save. This is not her first time on a major show, though her earlier appearance was as a part of the NXT roster.

It was a cool debut. Check out the fallout:

Opinion: Belair has grown on me a good bit in the last few months and I’m digging the idea of her with the Street Profits on the main roster. If nothing else, Becky Lynch can use another challenger and Belair is certainly a fresh one if that is the direction they choose. This is something that could work out well for everyone involved and being associated with the Street Profits is going to help.

Do you like the promotion? Who will benefit from it the most? Let us know in the comments below. 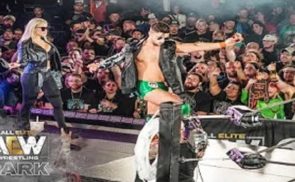