This is the FINAL show from Wrestlemania week as this week’s episode consists of the dark matches from before Takeover: Orlando. You can expect a lot of recaps and quick comments from most of the people on Saturday’s show, meaning this is kind of a breather before we get going again. Let’s get to it.

I was in the arena for this show, sitting in the upper deck and looking down at the hard cameras to my very slight right with the Titantron on my left.

A long recap of Takeover gets us going, of course.

The announcers chat about Takeover, which hadn’t happened as they talk.

Nigel has a rather creepy sounding crush on Peyton and Billie Kay. Peyton sends her face first into the mat to start and looks over to Billie for approval. Aliyah takes Peyton down so Billie grabs her hands, starting a tug of war. Back up and Peyton pulls Aliyah’s arms while bending backwards over the ropes for an impressive looking hold. Aliyah comes back with a few Japanese armdrags, only to get kneed in the face. A fisherman’s suplex ends Aliyah at 2:50. Royce looked good but Aliyah still needs a lot of polish. 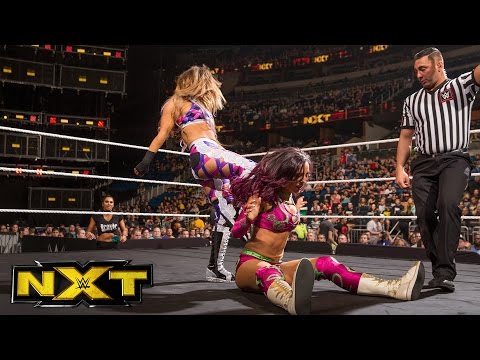 Asuka asks who is left for her. This sounded much more heelish than her usual.

Quick look at Aleister Black’s debut. Andrade Cien Almas was as a club just a few hours after the loss. The announcers make this sound like a big problem for him.

This was taped first and I actually missed it as the taping started before the scheduled time on the tickets. I hope it’s just due to the size of the arena but the Boyz come out to SILENCE. They’ve also turned heel and now don’t care what people think of them because they’re doing it their way. Harv and Tucker start things off and an early jumping bearhug has Harv in trouble.

Otis comes in so Tucker throws Harv from one bearhug into another. Gurv comes in and tries to dance at Otis, earning himself a double splash from the big guys. The Boyz take Otis into the corner until a double suplex cuts off anything they had going. The hot tag brings Tucker back in and Otis lifts Harv up for a slam with Tucker diving onto his partner’s back for added weight. Whatever is left of Harv is pinned at 3:20.

Rating: C. I know they’re not great and that they don’t have a long shelf life but I’m having a lot of fun with Heavy Machinery. They’re not trying to be anything more than what they are: two big guys doing big guy offense but in a very entertaining way. That finisher looks good and they’ve kept the matches short so nothing is overexposed. It’s just a good performance of a simple idea, which is a great way to get an act over. 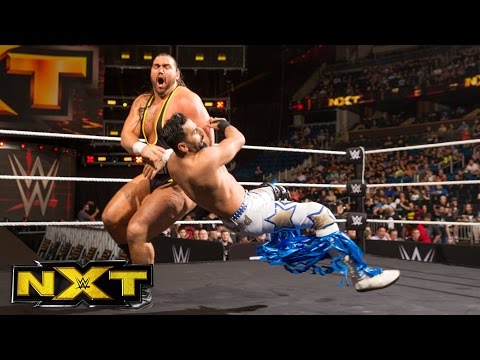 Paul Ellering and the Authors of Pain are ready for whatever is next.

Bobby Roode says he did what he promised to do. The Glorious Era will continue.

We get a listen to the FOURTH official theme song of Takeover. The show was two and a half hours long and had as many official songs as Wrestlemania.

Lorcan has a mystery opponent and it’s……EL VAGABUNDO, a masked man (with a big beard sticking out) who happens to have a guitar. He says he has a song for us and is instantly the coolest thing the crowd has ever seen. The VAGABUNDO chants start off as Nigel says he’s heard a lot of great things about the newcomer. He’s even got a question for us: WHO WANTS TO WALK WITH EL VAGABUNDO?

The “SI” chants break out and he just happens to have a song for us. Lorcan grabs the guitar and says he knows Vagabundo is the Drifter. Fans: “NO! NO! NO!” Lorcan wants him to drift away but gets stomped down in the corner before the opening bell. Oney is quickly sent to the floor and we take a break with Vagabundo having to adjust his mask.

Back with Vagabundo sending him into the corner for a running clothesline as Nigel talks about the prestige of a luchador’s mask. Lorcan fights back with about seven straight running hip attacks in the corner (earning himself some boos ala WarZone and Attitude for the N64). Vagabundo tries a slam but loses his mask, somehow revealing Elias Samson (Nigel: “I KNEW IT!”). Lorcan gets a running Blockbuster for the pin at 7:18.

Rating: C+. This was a lot of fun with the joke being out of the Juan Cena playbook. The fans ate it up and Lorcan somehow came off as a heel in the whole thing. I really hope this continues as the Drifter character was a big waste of time but him doing anything he could to stay in NXT is a great idea. 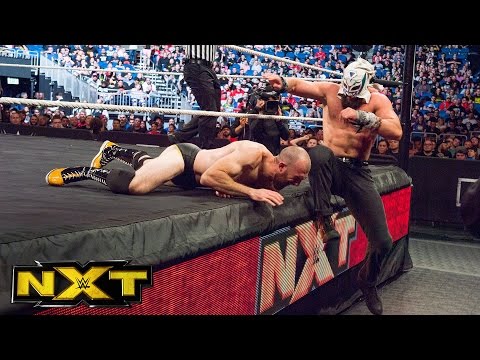 Post match Samson says he belongs here but a female security guard cranks on his arm and forces him out.

Overall Rating: D+. I’m not entirely sure how to grade this one as the show ran 51 minutes (counting commercials) and there was only about nine minutes of televised wrestling, almost none of which had any long term value. The matches were fun though and the recaps were a great way to catch people up on Takeover. There’s only so much you can do with NXT’s taping schedule so this was about all you could expect.

Remember to follow me on Twitter @kbreviews and pick up the NXT: The Full Sail Years Volumes I and II, now in PAPERBACK. Check out the information here: 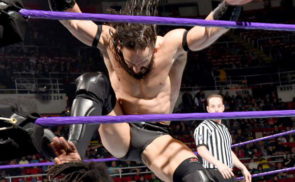