Wow it feels like a long time since we’ve been here. So back in March, the NWA was gearing up for the 2020 Crockett Cup when Coronavirus happened. As you might have guessed, that changed everything going on and the decision was made to not air this show for about two and a half months. Here it is though, with the extended show under the Super Powerrr banner. Let’s get to it.

Billy Corgan welcomes us to the show and promises a special announcement about the future of the NWA at the end.

Here are Marty Scurll and Brody King for a chat. Marty talks about Villain Enterprises being here in the NWA and if you mess with him, you mess with Brody too. King promises that Scurll will be the next World Champion.

We look back at Kamille attacking Allysin Kay and staring down Thunder Rosa.

We recap Kamille’s time in the NWA.

Kamille drives her straight into the corner to start and stomps away. Max forearms away but gets glared down off a sunset flip attempt. After putting Maxx on top, Kamille hits a Regal roll and spears Maxx down for the pin at 2:31.

Post match the fans want Kamille to speak and she glares Galli back when he asks for a comment.

We get a video from Kamille, now with red hair, talking about how she has been great her whole life and how no one likes her as a result. Her coaches loved her but the parents wanted her taken out of the league for endangering their kids. Why should she have any respect for authority? She is an elite athlete who has dominated everything she has done.  That’s why Nick Aldis called: she isn’t here for her looks, but because she can take care of problems. She doesn’t talk because she lets her actions do the talking for her. While she’ll never start a fight, she’ll always end one. She’s here to end all of us.

Austin Idol wants to show you how to get heat because he’s a professional wrestling psychologist.

We recap Aron Stevens and the Question Mark wanting a Tag Team Title shot. They’ll go through the Rock N Roll Express to get there. Stevens beating up Trevor Murdoch was included as well.

Sean Mooney brings out the Express, who want the Crockett Cup.

Morton works on Mark’s arm to start so it’s some KA-RAH-TAY to get him free. Stevens comes in to miss an elbow, which he claims was due to Morton moving illegally. An armdrag sends Stevens into the corner and he gets ping ponged between Ricky and Robert. He’s fine though….and there’s the faceplant. Stevens is back to take Morton into the corner as Murdoch comes out.

That sends Stevens into a rant about how Murdoch was injured (Stevens: “I GUESS YOU FLUNKED HONESTY!”) but worry not, because he has some backup: Question Mark Jr.! This guy is huge and commentary thinks it’s Brian Milonas, because it’s not like there are many other people that size. A two second chase has Mark Jr. gassed so Morton rolls Stevens up for the pin at 5:11.

We look back at Zicky Dice winning the TV Title last week.

Here’s Melina to say that she’s a legend and deserves the next title shot. It’s not her fault that Allysin Kay lost her title and the rematch. Cue Kay to say Melina cost her the rematch because she is a coward. Now it’s champion Thunder Rosa come out to say she’ll face anyone. She’s already beaten Kay though and won’t lay down for Melina. But let’s just make it a triple threat anyway.

Video on Tim Storm vs. Royce Isaacs over the fake Mama Storm (Danny Deals). This led to the return of former NWA World Champion Jax Dane.

No DQ and Deals is in Dane’s corner. Dane waits for Storm at the entrance and the brawl is on in a hurry. They get inside with Dane snapping off a belly to belly suplex and they’re back to the floor again. The battle of the forearms head into the crowd with Dane sending him into a barricade and pounding him down. Storm swings a gate into Dane’s ribs and they fight back to ringside.

Dane is sent head first into the Crockett Cup to draw some blood. The loud chop off sets up an overhead belly to belly to nearly drop Storm on his head on the floor. Back inside again and Dane wedges a chair in the corner, which isn’t likely to end well. Dane shrugs off some clotheslines and a big boot, setting up a Samoan drop. Dane misses a charge into a chair in the corner and walks into the Perfect Storm for the pin at 8:31.

Post match, Deals has to face Storm, which wasn’t mentioned before the match. Deals puts the Mama Storm gear back on, earning himself a pair of Perfect Storms.

Mae Valentine doesn’t get why Royce Isaacs is going so nuts about her friendship with Sal Rinauro. No she isn’t cheating on Royce because her mama raised her to be pure. This has already cost her ONE HUNDRED FOLLOWERS!

The trash talk sends Marti outside but she comes back in to stomp both of them down in the corners. Some running hip attacks get two on Steelz and a Russian legsweep gets two on Steelz. Vox is back in with a missile dropkick to Belle for two and the Real Catch has Steelz in trouble. Belle takes Vox down but walks into a Codebreaker to give Steelz the pin at 5:48.

We recap Pope paying off the Bouncers to beat up Eddie Kingston, plus the Bouncers losing their Tag Team Title shot against James Storm and Eli Drake.

Here are Kingston, Storm and Drake for a chat. Kingston talks about how he wanted two fighters to take care of the Bouncers so he picked the World Tag Team Champions. Storm talks about wanting to entertain the fans and loving to fight. Drake doesn’t care if the Bouncers came from Ring of Honor because they got bounced right back to Ring of Honor. Any team who wants some of them, come see them in the Crockett Cup.

Nick Aldis/Thom Latimer vs. Marty Scurll/Brody King here. Aldis bails over for the tag to Latimer instead of facing Scurll so Latimer shoulders King to no avail. A shoulder and chop put Latimer down but Aldis’ cheap shot from the apron….has very little effect actually. Scurll comes in and claims a cheap shot from Aldis and the distraction lets the Villains hit a double elbow. Latimer gets sent outside so Scurll hits the superkick but Aldis sends him outside as well.

Back in and NOW Aldis is willing to fight as the cheating begins. Latimer grabs the chinlock but Scurll is up in a hurry for a suplex. The hot tag brings in King as everything breaks down. A sunset flip/German suplex combination into a piledriver gets two on Aldis but here’s Kamille to break up the chickenwing. Cue Royce Isaacs for a distraction so Scurll takes him out with a dive. The distraction lets Latimer hit King low, setting up the top rope elbow to give Aldis the pin at 9:47.

Corgan announces that since they can’t have actual wrestling right now so next week it’s a new series: Carnyland. 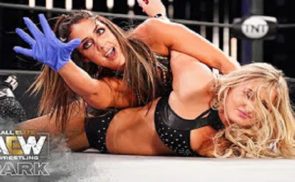