What a surprising cameo. WWE has a lot of talent on all of their rosters and with all the moves that have been made in the last few months, it can be kind of hard to keep track of where everyone is. Sometimes you’ll see people pop up on Monday Night Raw or SmackDown Live out of nowhere, and that was the case this week as an angle seems to have been dropped.

This week on Monday Night Raw, Mike and Maria Kanellis made an appearance on the show. This is a bit surprising as Mike walked out on WWE last week on 205 Live, leaving Maria stunned. The move was not mentioned on this week’s show, though the couple seems to be splitting due to Maria yelling at Mike for losing another match, this time due to Becky Lynch’s Disarm-Her.

It hasn’t been going well for Mike lately. Check out his match on 205 Live: 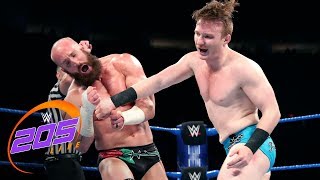 Opinion: I’m not sure where this is going but it’s nice to have something fresh going on. Mike and Maria might not be the most interesting pairing but they are certainly new on Monday Night Raw and this is a different direction to take. Hopefully things stay interesting, as Maria being angry is the best thing that can happen in the story. Now if only he can back it up in the ring.

Did you like the angle? Where do you see it going? Let us know in the comments below.

Shaking Things Up. Change Made To Extreme Rules Match.