Is it really a demotion? There are a lot of people wrestling under the WWE umbrella and there are only so many spaces for all of them. It is not out of the question to see them get stuck on the sidelines without much going on for a long stretch of time. Just because someone gets a chance to do something else does not mean that they are going to be doing it forever, which seems to be the case with a recent call up.

The Coronavirus pandemic has changed the way WWE works in a big way, with a lot of wrestlers not being around due to fear of contracting the virus. That is a scary situation for a lot of wrestlers and it makes sense to have them take some time off. This opens up a series of spots for some other wrestlers, and some names showed up on the main roster. However, one seems to be heading back down to NXT.

The NXT Twitter account has announced that Bronson Reed will be facing Shane Thorne on the August 5 show. This marks Thorne’s return to NXT after a few months on the Monday Night Raw roster. Thorne had been teaming with Brendan Vink under MVP’s management but MVP has since moved on to running the Hurt Business. Thorne’s most recent match on Monday Night Raw took place on May 11, though he has wrestled on Main Event since then.

@ShaneThorneWWE I don't think you ready for this jelly! https://t.co/x5CjH18HBZ

Thorne did well on the main roster. Check out some of his time on Monday Night Raw:

Opinion: You kind of had to know that this was coming, as Thorne never felt like much more than a jobber to the stars. He was fine for what he did, but he did not really have much else going for him that made him stand out. Putting him back down in NXT makes more sense as he needs to develop, which is kind of the point of the whole place. Thorne has talent, but he isn’t ready for Monday Night Raw, which isn’t a bad thing.

What did you think of Thorne? What should he do in NXT? Let us know in the comments below.

Update On This Year’s WWE Draft 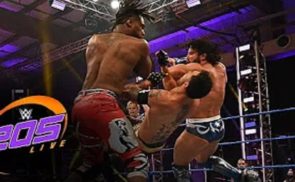