We are less than two weeks away from Extreme Rules and the card could use some work. There are some more matches that could be added to the card and the show could use some more extreme. That shouldn’t be difficult to figure out and I’m curious to see what they do. Let’s get to it.

Here are Bianca Belair, Alexa Bliss and Asuka for a chat. Belair would call out Bayley right now but she knows it wouldn’t be a fair fight. Last week, Bayley should have fought Bliss one on one but that wasn’t the case. Cue Damage Ctrl, with Bayley saying she is taking over WWE and that means getting the title back. Belair says Bayley was great but then she got hurt and now someone new is here. Bayley wants the title and she’ll take it in a ladder match at Extreme Rules. For now though, we need a match.

Non-title. Belair knocks her outside and we take an early break. Back with….Sami Zayn and Solo Sikoa arriving, followed by a return to the match that absolutely had to start before the break. Belair blocks a headscissors with a backbreaker for two but Sky hits the slingshot knees in the corner for two.

Belair is back up with some right hands in the corner but they head outside, where Sky gets in a posting as we take a break. Back with Belair sending her into the corner again and suplexing her into a delayed vertical suplex for two. Sky kicks her down again though and steps on Sky’s hair. That doesn’t last all that long as Belair is back up for an exchange of missed moonsaults.

The handspring moonsault gives Belair two and she easily pulls a diving Sky out of the air. The fall away slam gets two but Sky knocks her off the top. Belair evens that up by shaving Sky off the top as well, setting up a slingshot dive to the rest of Damage Ctrl. Back in and the KOD finishes Sky at 17:49.

Rey Mysterio talks about what it means to be a father, but tonight, he is focused on Seth Rollins.

Miz talks to his security force, promising them a variety of things and talking about how they are here to be stealthy. They are dubbed the Miz Force and sent off to find Dexter Lumis.

Before the match, Rollins talks about how Matt Riddle cost him the US Title last week. That means Rollins has to get his revenge in the Fight Pit, which isn’t his type of match. No worries though because he is Seth Freaking Rollins baby! All Rollins does is win so he’ll do it again there. As for now, he’ll give Rey the beating Rey’s son deserves.

We get to the match, with Rey dropkicking him to the floor before the bell and it’s off to a break. We’re joined in progress with Rolling having been busted open off a posting during the break but being fine enough for a tilt-a-whirl backbreaker. Rollins misses a charge into the corner though and a drop toehold sends him into another buckle.

Back up and a heck of a gutbuster drops Rey and Rollins sends him face first onto the floor for a bonus. Cue Dominik Mysterio with a chair to approve of Rollins’ actions as we take a break. We come back with Rollins kicking him in the head as Dominik watches from ringside. Rey manages a quick DDT for a breather before countering the Buckle Bomb. Rollins buckle bombs him on the second attempt, setting up Michinoku Driver for two. Back up and a hurricanrana sends Seth to the floor, allowing Rey to hit his sliding splash outside.

Rey takes him back inside where the 619 is broken up, leaving Rey to setting for a top rope hurricanrana. Now the 619 connects and sends Rollins outside. With Rollins down, Dominik loads up the chair and tells Rey to hit him with it. The distraction lets Rhea Ripley come in for a chair shot of her own. Back in and the Stomp sets up a choke to finish Rey at 17:10.

Bobby Lashley wishes Matt Riddle good luck about tonight’s match against Damian Priest. Oh and don’t ever interrupt one of his matches again. As for the Fight Pit, knock Rollins’ teeth out.

Gargano grabs a running hurricanrana on Gable to start before it’s off to Owens. Gable gets taken down and crushed for two but Otis gets the blind tag. That means the real beating can ensue, including a gorilla press World’s Strongest Slam for two. We take a break and come back wit Gargano still in trouble in the corner.

Some backdrops get Gargano towards the middle of the ring but he has to kick Gable in the face first. NOW the hot tag can bring in Owens to clean house, including a Cannonball into s sharpshooter. Gable grabs the rope so Owens hits a Swanton for two more. It’s off to Gargano, who gets suplexed down, setting up a Steiner Bulldog of all things for two.

Everything breaks down and Otis clotheslines Owens on the floor. Otis loads up the announcers’ table but gets superkicked onto it, setting up an elbow from the barricade to put Otis through the table. Cue Austin Theory to distract Gargano, allowing Gable to hit a Dominator DDT for two more. Gargano superkicks Theory and One Final Beat is enough to finish Gable at 12:50.

AJ Styles talks about why he turned down Judgment Day when Finn Balor comes in. Balor hypes up the team some more ans wants AJ to keep thinking about it.

Chad Gable defends Otis’ loss to Austin Theory, who thought they could take out Johnny Gargano. Then Theory gets a phone call from Braun Strowman, who says he wants to face Gable next week.

MVP is on commentary. Omos throws them outside to start, beats them up on the floor, beats them up back inside, and hits a chokebomb to set up the double pin at 1:40.

Post match, Omos stacks them up on the announcers’ table and poses over them.

Miz finds his security force knocked out, plus Dexter Lumis dressed as a hockey statue. Lumis knocks Miz out and cradles his head for a bonus.

LeRae is making her return to the company and main roster debut. LeRae knocks her to the floor to start but a baseball slide is caught in the ring skirt so Ash can pound away. Back in and Candice hammers away, setting up a Backstabber. Ash catches her on top, but it’s Mrs. LeRae’s Wild Ride (middle rope swinging neckbreaker) for the pin at 1:40.

Damian Priest isn’t worried about Matt Riddle tonight because he has his family with him.

Solo Sikoa is at ringside too. Sami grabs a headlock to start and then runs him over, meaning he can throw up the one. A backbreaker puts Zayn down for a change but he’s back up with an elbow to the head for two. Styles gets knocked outside but comes right back in to slug away. The fireman’s carry neckbreaker looks to set up the Styles Clash, which doesn’t work so soon.

Instead Styles settles for the torture rack neckbreaker for two and Zayn is sent outside for a change. The slingshot forearm connects and we take a break. Back with Styles being sent hard into the corner but managing to counter the exploder suplex into a rollup for two. Sami is right back with a boot to the face and the Blue Thunder Bomb for two of his own and frustration is setting in.

Styles is sent outside and knocked into the timekeeper’s area, leaving him to dive back in to beat the count. They slug it out again and exchange kicks to the head for a double knockdown. We take another break and come back again with Zayn having to fight out of the Styles Clash. Instead, Zayn grabs the exploder suplex into the corner for a breather. The Calf rusher sends Sami bailing to the ropes, followed by a jawbreaker to stagger Styles. Sami sends him outside, where Sikoa grabs a Rock Bottom onto the apron. Back in and the Helluva Kick finishes for Sami at 20:01.

Post match here is the Judgment Day, who offer Styles a spot on the team again. Styles flips them off and gets beaten down, with Finn Balor loading up the chair around his neck. Pillmanizing is loaded up but Balor cuts himself off, saying that’s not what friends do.

Candice LeRae doesn’t think much of Damage Ctrl, but she and Bayley can fight later.

The rest of Judgment Day is here too as Priest shoves Riddle down to start. Riddle counters a suplex into a choke, which doesn’t last long. They trade missed kicks to the head and that’s good for an early standoff. Priest gets dropped and the Broton gives Riddle two. Back up and Priest kicks him HARD in the face but Riddle manages to pull him outside.

Finn Balor takes the running kick on the apron for Priest, leaving him to suplex slam Riddle HARD onto the barricade as we take a break. Back with Riddle fighting out of a double arm crank and striking away, including a big shot to knock Priest outside. Now the apron kick can connect, setting up the springboard Floating Bro for a knockdown.

Back in and a knee to the face drops Priest again but he is right back up to shove Riddle off the top for a huge crash. Priest drops him hard again and we take a break. We come back again with Riddle hitting a superplex for two and they’re both down. A slugout from their knees goes to Riddle, who hits Bro Derek for two.

Back up and a Ripley distraction lets Priest hit something like a swinging Downward Spiral for two. Riddle flips out of a chokeslam but the RKO is blocked. Instead it’s a jumping knee to the face, which draws Balor up for the distraction. Another chokeslam is loaded up but Riddle reverses into a cradle for the pin at 18:51.

Post match the beatdown is on but here is Edge for the save. Edge clears the ring and says he is tired of dealing with Judgment Day. That’s why at Extreme Rules, Edge wants Balor in an I Quit match. Balor stares up at Edge to end the show. 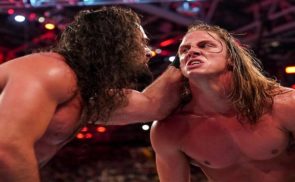