It’s another night about the old guys as we have the go home show for Super Show-Down. Tonight, Shawn Michaels is scheduled to appear to make the final push towards Undertaker vs. Triple H on Saturday and you know full well he’s not going to be the only one here. Other than that we also have the issues between Dean Ambrose and the rest of the Shield, which could go several ways. Let’s get to it.

Here’s Dean Ambrose to open things up. Ambrose talks about being champion on his own and with the Shield, but the interesting thing is that Seth Rollins replaced him in short order. Maybe he doesn’t need to be part of the Shield anymore. Dean cuts off the questions about his loyalty and talks about how he could turn on the team anytime. We see a clip of last week with Dean looking back at Dolph Ziggler, Drew McIntyre and Braun Strowman but then posing with the Shield.

Ambrose doesn’t want to hear about the questions anymore because the Shield is a brotherhood instead of a brand and they’ll always ride into battle together. Except for all those times they’ve fought. Cue Baron Corbin to say let’s judge Ambrose by his actions. Tonight, he has three choices: face Seth Rollins for the Intercontinental Title, face Roman Reigns for the Universal Title, or face Braun Strowman. Ambrose wants to face Corbin instead so Corbin makes the choice for Dean.

Strowman runs him over to start and basks in the fans’….mixed reactions. The neck crank goes on until Strowman hits a running splash in the corner, followed by another neck crank. Strowman chokes on the ropes as this is complete dominance so far. A guillotine choke slows Strowman down though and Dean goes for the knee in the same battle plan that everyone has.

Back from a break with Ambrose hammering away at the face and slipping out of a running powerslam. A running dropkick has Strowman down on one knee but he pops up and runs Dean over again. Dirty Deeds connects for a delayed two and Strowman bails to the floor where he gets sent into the steps. Back in and Strowman hits a quick powerslam but can’t cover, allowing Dean to roll out to the floor. Ambrose gets thrown back in for another powerslam but here’s Roman Reigns to Superman Punch Strowman for the DQ at 13:55.

Everyone else comes out for the staredown so Corbin makes Drew McIntyre vs. Seth Rollins for later but for now, Roman Reigns gets to face Dolph Ziggler.

Post break, Rollins consoles Ambrose but Dean says he could have been Intercontinental Champion had he made the right decision.

Reigns says let’s make it a title match and the referee holds the title up, only to have Corbin come out to say that neither this nor Rollins vs. McIntyre will be for the title. Ziggler goes right after him to start and scores with a dropkick before slapping on a chinlock. Reigns gets sent outside and the running DDT plants him on the floor for good measure. Back in and the Fameasser gets two as we take a break.

We come back with Reigns fighting out of a chinlock but getting caught in a sleeper instead. That’s broken up as well and Reigns starts back with the clotheslines. The Superman Punch is countered into a rollup for two so Ziggler goes with the Zig Zag for the same near fall. Ziggler’s superkick is blocked with a Superman Punch for two, followed by the spear for the pin at 12:55.

Non-title. The Bellas and the Riott Squad are here. Before the match, the Squad promises to give Ronda her first loss tonight. Rousey wastes no time in flipping Riott over, meaning it’s time for a breather on the floor. Another trip to the floor allows Riott to kick her in the ribs on the way back in and Rousey’s arm gets sent into the post for two.

Ruby fights up and pulls Rousey’s hair to bend her neck around the top rope. That’s rather unpleasant so Riott chokes away on the middle rope instead. Riott sticks with the hair theme by slamming Rousey down by the head and talking some trash. The Riott Kick is countered into a suplex and the over the shoulder powerbomb gets two. Rousey’s spinning Samoan drop sets up the armbar to make Riott tap at 6:52.

Video on Becky Lynch vs. Charlotte.

Egads get this over with already. An early Glorious DDT attempt is countered and Konnor runs him over. A jumping elbow gets two and we hit the chinlock for a bit. That’s broken up in short order and Roode hits a running clothesline. There’s the middle rope Blockbuster but a Viktor distraction lets Konnor hit the Dominator for the pin at 4:19.

It’s time for a Moment of Bliss, where she talks about Trish Stratus being her hero growing up. They’re facing each other at Evolution, but Bliss remembers the first time they met. When Bliss was a kid, she asked Trish for her autograph but Trish said it would be $50 because you can’t buy Jimmy Choo shoes for free. Trish ripped up the autograph book and left.

B Team vs. Revival

Joined in progress with Dawson tagging himself in to work on Axel’s arm. The armbar goes on with Wilder coming in to crank on it even more. Axel finally sends him face first into the buckle and it’s off to Dallas to clean house. A spinebuster cuts Dawson off but a Rocket Launcher hits knees, allowing Dallas to roll Wilder up for the pin at 3:41.

Post match the AOP comes in to destroy the B Team.

Ambrose is still banged up when Reigns comes up to check on him. Dean isn’t happy, because he could have been Universal Champion right now if he had tried.

Corbin praises AOP and Rockstar Spud. The height difference is kind of amazing.

It’s Susan G. Komen month so here’s a video about how cancer is in fact bad.

Strowman and McIntyre are ready to get rid of the Shield and Strowman accuses McIntyre of being the weak link.

Non-title. Drew sends him into the corner to start and shoves Seth’s face. You don’t do that to Rollins, who takes Drew outside for a suicide dive. Back in and McIntyre kicks him in the ribs and cranks away at an armbar with a hand to the face. Rollins gets sent hard into the corner and we take a break.

Back with Rollins getting two of his own off the Blockbuster and hitting a spring forearm to the back of the head for the same. The reverse Alabama Slam is countered into a victory roll and the Falcon Arrow gives Rollins two more. Super White Noise is countered into the buckle bomb but here’s Ziggler for a distraction. The Claymore finishes Rollins at 11:15.

Post match everyone comes in and it’s a big brawl with Shield being left laying. Strowman and company hit the Shield pose.

Kevin Owens comes up to Elias in the bank so he can eat some of Elias’ lettuce. They don’t have the right kind of nuts though and the attendant gets doused with water instead.

Here are Elias and Owens for a song. Elias asks who wants to walk with him and Owens points at himself. Owens talks about the two of them getting along so well and their friendship makes sense. John Cena and Bobby Lashley teaming together doesn’t make much sense though, just like Seattle having a basketball team.

That’s a rather sensitive point for the fans, who go nuts on Owens as he asks about where Cena has been lately. Elias says that would be at Wrestlemania, when Cena ruined Elias’ first Wrestlemania moment. So Elias didn’t watch Greatest Royal Rumble either. The lights start to come up so Elias threatens to have the light guy fired. More Seattle insults ensue and Owens promises to win tonight.  Speaking of tonight, here’s Lio Rush to talk about where things are going tonight. Rush talks about Cena being a legend and tonight, Owens is going to get what’s coming to him.

One hard shove puts Owens on the floor to start and Lashley wrestles him down for good measure. Owens’ headlock works a bit better and he starts shouting at Rush to fill in time. That just earns Owens a neckbreaker and some face first trips into a few buckles. A powerslam sets up a fireman’s carry but Owens elbows his way to freedom. Lashley goes shoulder first into the post as we take a break.

Back with Owens sending him into the steps and dropping the backsplash for two. A top wristlock keeps the arm in trouble and Lashley on the ground, which is the best choice for someone like him. Lashley fights up and clotheslines Owens down. The running shoulders in the corner looks to set up the delayed suplex but the arm gives out again. Instead it’s a spinebuster but Elias goes after Rush, allowing Owens to grab a rollup for the pin at 10:18.

Post match Rush gets knocked out of the air and Lashley gets powerbombed.

This is your weekly Mixed Match Challenge preview. Fox goes straight at her to start but gets punched down for her efforts. A clothesline sets up the very early chinlock on Bayley but she’s right back up with the middle rope elbow to the jaw. Fox pulls her down by the hair though and we hit the chinlock. Bayley shrugs that off as well and rolls out of a sunset flip into a basement dropkick. Jinder Mahal goes after Bayley so Finn Balor lays him out. The Bayley to Belly finishes Fox at 3:36.

Here’s Shawn Michaels for the big closing talk. Shawn says the people are making him feel good to come home again and now he’s thinking about how Super Show-Down’s match is going to be the last time ever. What emotion should he be feeling? It might even be joy because it is time for the final showdown. As cheap as he is, he bought a ticket to come to Australia to see it in person as an innocent bystander.

That was the case until a few weeks ago, when Undertaker made it clear that Shawn had to make a choice. Shawn has the utmost respect for Undertaker, though he’ll pick HHH every single time. For some reason that upset the Undertaker (mainly because HHH almost never beats Undertaker and Shawn should be smarter than that) so now he’s got Kane in his corner. Well if Kane tries anything, it’ll mean some Sweet Chin Music. Cue Kane to appear behind Shawn and drop him with a single right hand….so there goes the gong.

Undertaker appears next to Kane and Shawn looks up at him, only to be picked up for the Tombstone. That gives us the talked about moment of the night: Shawn Michaels’ bald head, which you had to know was coming but my goodness it’s jarring. HHH comes in for the save but gets beaten down as well. Double chokeslams leave Shawn and HHH laying, followed by a Tombstone to HHH. Undertaker and Kane pose on the stage to end the show. 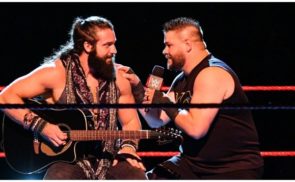 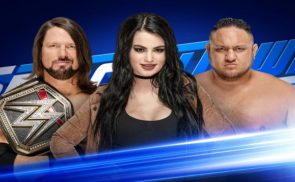