It’s the go home show for Hell In A Cell and there are four matches announced for the card. I’m not sure what they are waiting for with adding on more matches, but you have to think that something takes place this week. However, it is also Memorial Day, meaning there is a good chance that very little is going to happen here. Let’s get to it.

Here is Becky Lynch to get things going. She hasn’t been out here to start things off in a bit and she knows the people here are glad she has lost everything. Lynch doesn’t care what these people think, because she collects enemies. We flash back to Money in the Bank 2020, with Asuka winning the briefcase. Then Lynch handed her the Raw Women’s Title because she had to go become a mother.

That made Asuka a selfish monster….and here is Asuka to interrupt. She mocks Becky for being a baby and promises to win the title on Sunday. Cue Bianca Belair, who isn’t happy with Asuka kicking her last week and isn’t too fond of Becky either. She is sure the title isn’t going anywhere though and the fight is on, with Asuka hip attacking Becky to the floor, leaving the other two in the ring.

Non-title and Becky Lynch is on commentary. They flip and jump over each other to start until Asuka kicks her in the ribs. Back up and Belair gets to the middle rope where she, as always, tells Asuka what she can kiss. After the backflip over Asuka, Belair gets pulled down for a kneebar, followed by a guillotine choke. That’s reversed into a suplex for two but another suplex sends both of them crashing to the floor as we take a break.

Back with Asuka hitting a German suplex into the running hip attack for two. Belair catches her on top though, only to moonsault backwards, allowing Asuka to hit a middle rope dropkick for two. A missed charge in the corner lets Belair try the KOD, but Asuka flips out and lands on her feet. Asuka comes up holding her knee though (Becky is VERY pleased) and needs a breather on the floor. Back in and a quick knee gives Asuka two but the Asuka Lock is countered. Asuka tries a rollup, which is quickly stacked up to give Belair the pin at 13:05.

Post match Becky comes in and lays them both out.

Gable headlocks Rey to start but can’t hold onto him, allowing Dominik to come in instead. Dominik takes Gable to the corner and runs the ropes for a wristdrag. Everything breaks down and a triple dropkick sends Otis outside. Gable knocks Dominik off the ropes though and a whip sends him into the barricade as we take a break.

Back with Rey dropkicking Owens to break up a Sharpshooter, allowing the tag to Ezekiel. Everything breaks down and Ezekiel cleans house with some Stinger Splashes. A spinning powerbomb gets two on Gable and a hurricanrana sets up a missed 610 on Owens. That leaves Owens to superkick Gable by mistake and it’s a double 619 to rock Gable again. Ezekiel’s spinning suplex finishes Gable at 8:32.

Post match Owens is ticked and wrecks the announcers’ table as the Academy isn’t pleased.

Here is Cody for a chat. Cody talks about having the potential to do great things and how his father knew how to see that potential in others. His father told him about the potential in Seth Rollins and then one day Cody was facing Rollins at Wrestlemania. That made Cody nervous, because he couldn’t come back with a loss. Cody didn’t lose there and he didn’t lose at Wrestlemania Backlash.

Now they’re going to the Cell and Cody is going to be able to lose all of his self control because Rollins will be locked inside with a man who wants to hurt him. Cue Rollins to interrupt through the crowd to say he just doesn’t like Cody. All Rollins hears in his sleep is CODY CODY CODY and he can’t stand it any longer.

Six years ago, Cody left WWE and found some friends who wanted to tear down everything Rollins built. Now Cody is back, but he doesn’t get to tear down Rollins’ kingdom. You don’t get to take a sledgehammer to Rollins’ throne and then try to take it from him. On Sunday, Rollins is going to end him and we can wake up from this American nightmare. Cody asks what is stopping him from coming after Seth right now.

Nikki Ash is here with Doudrop. Bliss gets powered into the corner and taken down for an early two. Back up and Bliss headscissors her into the corner, setting up a some basement dropkicks. Doudrop runs her over again but misses a Vader Bomb, allowing Bliss to go up, take out Ash, and hit Twisted Bliss for the pin at 3:17.

Last week, MVP beat Bobby Lashley and made the Lashley vs. Omos match on Sunday into a handicap match.

It’s time for MizTV. Miz plugs the season premiere of MizTV next week but here are the Street Profits to interrupt. They talk about Hell in a Cell on Sunday and hype up the card but realize they need to ask Miz about the show. Miz is ready to answer but IT DOESN’T MATTER WHAT HE THINKS. Miz puts his hand up and they mock him asking what that means.

Then the 24/7 goons come running in and the Profits get involved as well. It turns into a multi person brawl until Tamina hits a Samoan drop on Dana Brooke to win the title. Tamina picks Akira Tozawa up and kisses him, only to get taken down in a backslide to give Tozawa the pin and the title.

We recap Mustafa Ali’s issues since he came back to WWE as he tries to win the US Title.

Theory is on commentary and if Ali wins, he gets a US Title shot. Ali sends him into the corner to start but Ciampa is right back with a knee to the face for two. Ciampa elbows him down and grabs a chinlock before stomping on Ali’s head. The second chinlock doesn’t last as long as Ali is back up with a kick to the face to send Ciampa outside. There’s a suicide dive, with Ali almost going head first into the announcers’ table. Ali goes up but Theory pulls him off the ropes for the DQ at 3:24.

Result: Mustafa Ali b. Ciampa via DQ when Theory interfered (3:24)

US Title: Theory vs. Mustafa Ali

Theory is defending and Ali pulls himself up, only to get thrown back down. A whip into the corner rocks Ali again but he manages a superkick. Ali goes up but gets crotched, setting up the A Town Down to retain the title at 1:43.

Hold on though as here is Adam Pearce to say let’s run it back on Sunday.

Riddle and Shinsuke Nakamura dub themselves the Bronin and Ronin and promise to take the Tag Team Titles.

Non-title but a CHAMPIONS CONTENDERS match. Jey gets taken into the wrong corner to start and it’s time for alternating kicks to put him in trouble. That’s broken up and it’s off to Jimmy for a Samoan drop. Jey comes back in to whip Riddle hard into the corner but another kick gets Riddle out of trouble. Nakamura comes back in with Good Vibrations to Jimmy. There’s the sliding German suplex but Jey comes back in to cut Nakamura off. The Superfly Splash gives Jey two and we take a break.

Back with Nakamura getting over to Riddle for the hot tag but the hanging DDT is broken up. Nakamura tags himself back in as Riddle is being suplexed to the floor and it’s Kinshasa to Jey. Jimmy makes a save to leave everyone down but it’s Riddle back in with the snap powerslams. Now the hanging DDT can plant Jey, only to have Jimmy hit Riddle with the scooter for the DQ at 11:35.

Result: Shinsuke Nakamura/Riddle b. Usos via DQ when Jimmy used a scooter (11:35)

Mustafa Ali is ready for his title match on Sunday. He keeps getting knocked down but he is going keep getting back up and win the US Title in his hometown. Then Theory jumps him again and takes a selfie with the title over Ali.

Hell In A Cell rundown, including Judgment Day vs. AJ Styles/Finn Balor/Liv Morgan.

Morgan has been standing in the ring for about ten minutes now, following Ali’s promo, the pay per view rundown, a commercial and the Memorial Day video. Ripley had it better, having only stood there for the commercial and Memorial Day video. Morgan gets knocked into the corner to start but comes back with a choke. Some rams into the corner can’t break it up so Ripley drops backwards onto her for the real break. Ripley takes it to the floor and puts Liv on the apron, only to get caught in a hurricanrana. That isn’t working for Morgan either though as she gets dropped on the floor as we take a break.

Back with Morgan in trouble as Damian Priest and AJ Styles are at ringside. Ripley yells about how Liv dragged her down to her level. Morgan fights up and sends her outside for a high crossbody but Priest trips Morgan up. Styles cuts that off and Morgan reverses Riptide into a Backstabber for the pin at 10:08.

Post match Priest takes out Styles. Cue Finn Balor to take him out, allowing Morgan to dropkick Ripley so our plucky band of heroes can stand tall.

We look at the Cody/Seth brawl again.

And now, a contract signing. Bobby Lashley, Omos and MVP all come to the ring with Adam Pearce in charge. MVP promises to destroy Lashley in the Cell and says there is no Almighty Era without him. This Sunday, it ends once and for all. MVP signs and he hands it to Omos to do the same. Lashley says he never needed MVP but MVP says he’s talking too much so sign the contract.

The contract is signed and Pearce goes to wrap it up but MVP says we’re not waiting for Sunday. Security comes in and are cleared out just as fast…and here is Cedric Alexander to help take Lashley down. That’s fine with Lashley, who drops Alexander but gets kicked in the face by Omos. A table is set up in the corner and Omos loads up the powerslam, only to have Lashley slip out and spear him through it to end the show. 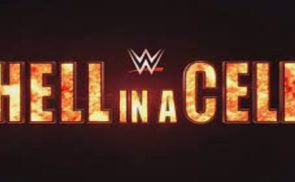 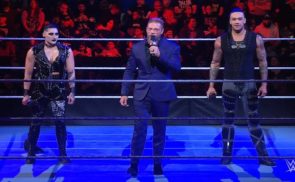