We’re back to the red show and closing in on the Royal Rumble. There are only three names announced for the Royal Rumbles so far and that means some spots need to be filled. Odds are some of that is done tonight but there is the chance that they’re leaving some surprises this year. Let’s get to it.

Here is Kevin Owens to get things going and the fans seem to like him. Before he can say much though, here is JBL to interrupt. After insulting the crowd, JBL says no one is buying Owens having a chance against Roman Reigns. JBL brings out Baron Corbin to insult the fans even more, including some University of Alabama insults. Owens buries his face in the turnbuckle as Corbin gets in every standard insult you can imagine. He says he was in a “JBL and Baron Corbin were talking for three minutes but didn’t say anything” coma but for now he’s willing to fight Corbin. Sure.

JBL is here with Corbin, who stomps Owens down in the corner to start. Owens gets in a few shots of his own though and they fight to the floor. That means Corbin can go face first into the announcers’ table but he’s back with a chokeslam onto the apron as we take a break. Back with Owens knocking Corbin off the top and landing the Swanton for two. Corbin comes back with Deep Six for two, only to walk into the Stunner for the sudden pin at 8:37.

Post match the Bloodline runs in to beat on Owens but he grabs a chair and fights them off.

Post break, the Bloodline is going to leave but Adam Pearce comes up to tell them about a Tag Team Turmoil match to crown new #1 contenders. They won’t be around to see it though as they’re banned from the arena, even as Solo Sikoa faces Dolph Ziggler.

We look back at Alexa Bliss snapping again last week against Bianca Belair, who wound up injured. Belair is ok and just needed stitches.

Alexa Bliss pops up on the announcers’ table to say Belair is scared of her, because she is the face of evil. She hasn’t felt this good in a long time and is willing to hurt people….and the Uncle Howdy video starts playing, this time with clips of the old Alexa and Lillie. Cue Uncle Howdy to stare at Bliss and we go to a break.

Damage Ctrl is here with Bayley, who says that she is going to prove what she is to Becky Lynch with this beating. The rest of Damage Ctrl leaves as Bayley starts fast, only to get caught with a running neckbreaker. Yim sends her to the floor for a kick to the chest from the apron to send us to a break. Back with Yim fighting out of a chinlock but getting sent to the apron for a Stunner. Bayley suplexes her from the Stunner to the floor but Yim kicks her in the head back inside. The Cannonball misses though and Bayley grabs a backslide with feet on the ropes for the pin at 8:03.

Johnny Gargano has a knee injury and is out of Tag Team Turmoil.

Candice LeRae is upset for Johnny Gargano not being in Tag Team Turmoil but she likes the idea of challenging for the Women’s Title at Wrestlemania. Rhea Ripley comes in to talk down to her, setting up a match tonight.

Here is Austin Theory to say THE CHAMP IS HERE and everyone has to accept the truth. The truth is that the now is forever and Seth Rollins couldn’t stop him last week. Then Rollins hurt his knee…but here is Rollins, on crutches, to interrupt. One of the crutches is thrown down though and Rollins gets in the ring without a problem.

Candice slugs away to start and counters a big boot into a rollup for two. Ripley finally manages to knock her into the corner though and there’s the toss by the hair. A superplex is broken up though and Candice slams her off the top instead. Another missed big boot sends Ripley outside but she sends Candice into the barricade. Back in and Riptide finishes Candice at 4:16.

Bobby Lashley is in the back when MVP comes in. Lashley won’t shake his hand but MVP thinks a thank you for getting him reinstates is in order. Lashley: “I haven’t punched you in the face yet have I?” MVP says they need to get back to what worked before, as Cedric Alexander and Shelton Benjamin are already back in the right place. Lashley says they’re good, but they won’t be working together. That’s cool with MVP, but just remember that his number is the same.

Video on Cody Rhodes’ recovery from his injury, including an appearance from Brandi Rhodes. To be continued.

Dolph Ziggler is ready for the Bloodline when Mustafa Ali comes in. Ali says they were offered a spot in Tag Team Turmoil but Ziggler turned it down. Last month Ziggler cost Ali the United States Title and now he’s costing him a shot at the Tag Team Titles. Ziggler says it’s not about him tonight and hopes he understands. Ali does not seem to understand.

Reed, who is the same height as Byron Saxton, is cut off by Miz before he can say anything. Miz suggests that Reed is his bodyguard and offers him a spot on MizTV tonight. Reed says there is no us, and if Miz wants something, pay him.

Sikoa runs him over to start and the beating is on fast. The neck crank and nerve hold go on Ziggler but he’s right back up. Ziggler slips out of a powerslam attempt and hits a dropkick, only to be tossed over the top and out to the floor as we take a break. Back with Sikoa hitting the running Umaga attack in the corner.

The chinlock goes on but Ziggler fights up and avoids the charge into the corner. Sikoa is back with a fireman’s carry but Ziggler slips out and hits the Zig Zag for two. Back up and the superkick is blocked, allowing Ziggler to try the Fameasser. That’s pulled out of the air though and a pop up Samoan Spike finishes Ziggler off at 10:51.

We look at Dominik Mysterio being arrested and then being hardened in jail.

Damage Ctrl brags about their win until Mia Yim interrupts. Yim calls Bayley a cheater and gets beaten down as a result.

It’s time for MizTV and we get right to the point, with Dominik Mysterio (and the rest of Judgment Day) being brought out as the guest. Dominik explains that you always roll with your crew in prison, but he can’t talk about what happened because snitches get stitches. Dominik: “When life comes at you, you have to grab it by the balls. Kind of like Maryse does to you.”

Then he threatened his cell mate and made sure he stayed safe because that’s how it works. Miz is a bit confused though, as he was told Dominik was in county jail for a few hours. Damien Priest doesn’t like that because it’s time to win Tag Team Turmoil. Violence is teased but here is the OC to interrupt and start the match.

There are five scheduled teams with Judgment Day (Damien Priest/Finn Balor) in at #1 and the OC in at #2. Of note: commentary says this is for a RAW Tag Team Title match, not both sets. Anderson elbows Balor down to start and it’s Gallows coming in for some elbows of his own. A shot to Gallows’ face just annoys him so Priest comes in for the battle of the big men.

Gallows takes over again and hands it off to Anderson for the HI YAH kick in the corner. Priest sends him outside though and it’s a whip into the steps as we take a break. Back with Gallows coming in to clean house but Dominik Mysterio grabs Anderson’s leg, allowing Balor to roll him up at 10:17.

Cedric Alexander/Shelton Benjamin are in at #3 and jump Judgment Day from behind to start. We settle down to Alexander knocking Balor down for a kick to the back. The chinlock doesn’t last long so Benjamin comes in with a Dragon Whip to Balor and German suplexes to Balor and Priest. Benjamin tosses Priest into Alexander’s jumping knee for two, with Balor having to make the save. The Neuralizer gives Alexander two but Priest catches a charge with South of Heaven. Balor adds the Coup de Grace for the pin at 15:47 total. Alpha Academy is in at #4 and we take a break.

Back again with Balor hitting a Sling Blade on Gable so Priest can come in with the Broken Arrow. We hit the chinlock, followed by a backbreaker/legdrop combination for two. Gable fights out of trouble and brings in Otis to clean house, including the running splash in the corner to Priest. Otis brings back the Caterpillar and hits the Vader Bomb on Balor…who pulled Gable on top of him. The stunned Otis is kicked in the face to give Priest the pin at 24:33. Hold on though as Balor, who was crushed under both Otis and Gable, is really banged up. Adam Pearce says Dominik is taking Balor’s place and the Street Profits are in at #5.

We’re joined in progress with Dawkins ripping Dominik’s shirt off and handing it off to Ford to hammer on him in the corner. Dawkins comes back in with the spinning splash in the corner as the beating stays on. A toss into the corner allows Dominik to bring in Priest so Ford slingshot flips in for the showdown. With that not working, Dominik comes in to distract Ford to the floor. That’s fine with Priest, who runs Ford over to send him over the announcers’ table. Dawkins hits the big dive though and we take a break.

Back with Dawkins still in trouble as Dominik grabs a chinlock. Priest adds a slam and Ripley certainly approves on the floor. Dawkins fights up and brings in Ford with a double high crossbody. Dominik gets shoved into a German suplex for two but Priest is back in to blast Dawkins with a clothesline for two more. Priest sends Dawkins over the barricade but Ford is there with the big lip dive over the corner. Back in and the 450 connects, only to have Priest break up the cover. Ford jumps from the floor to the apron to avoid a charge, leaving Dominik to roll him up (with Ripley grabbing the feet for the assist on the final pin at 48:19.

Post match the Usos come out to stare down Judgment Day to end the show. 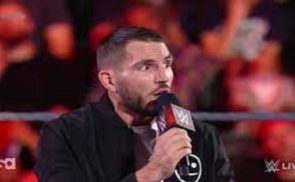 Injury Update on Johnny Gargano; Out of Action Temporarily