It’s the second go home show for Crown Jewel and most of the card seems to be set in stone already. This time around we’ll be seeing some of the final touches put on, including Seth Rollins vs. Bray Wyatt’s old friend Erick Rowan in a falls count anywhere match. The show’s audience is just miserably bad at the moment but maybe they can turn it around a bit tonight. Let’s get to it.

Here’s Paige to open things up. She’s so proud to have advised the Kabuki Warriors and to have been a small part of their success. Cue the Warriors, with Paige introducing them, only to have Asuka mist her in the face. As Paige begs for water for her eyes, here’s Becky Lynch to beat up both Warriors and set up her announced match against Kairi Sane.

Non-title. Sane’s ribs are banged up before the bell but she’s fine enough to strike Becky down into the corner. Becky fights back with a bulldog into an Oklahoma roll for two. An armdrag is blocked and Becky takes her down into something like Tommaso Ciampa’s former flipping armbar.

Back up and Becky can’t get the Disarm-Her as Sane bails out to the floor for a breather. That means a dive to take Sane down again but Becky goes after Asuka, allowing Sane to kick her into the steps as we take a break. Back with Becky spinning out of a bow and arrow hold but getting kneed in the face. Becky kicks away, with Lawler wondering if her snapping like this can be classified as a ginger snap.

Sane pulls her down into something like a cross legged Boston crab, which is pulled back so hard that their heads are almost touching. That has to be let go and a double knockdown gives Becky a breather. Sane kicks her down again but the Insane Elbow is broken up. The middle rope legdrop gives Lynch two and she kicks Sane in the head. Asuka gets kicked away as well but Sane hits a spinning backfist for two. Becky is fine enough to pull Kairi straight down into the Disarm-Her for the tap at 14:47.

Here’s R-Truth for a match with Buddy Murphy, but he isn’t sure Murphy is his buddy. As for the Singh Brothers, he was sure there were more than one of them so he got some glasses. Now he can have both eyes on the prize of becoming a 52 time champion. Murphy comes out and says Truth is remembering everyone, except Australia’s finest.

Murphy hammers away to start and gets up a boot in the corner. The twisting forearm gives Truth two and he hits the side kick for two. Cue the Singh Brothers with the 24/7 Title and the mob gives chase. Truth joins in, running in front of the champ for a bit before coming back in and eating a knee to the face to give Murphy the pin at 2:46.

Here are the Street Profits for a chat. They’re proud of their first win last week and are so thankful for Stun Owens Stun. Ford liked kissing the baby last week but Dawkins remembers kissing some woman at the after party. If anyone wants to fight them, they can come on because they want the smoke. That gives us a WE WANT THE SMOKE chant and they head into the crowd again.

Back from a break with Ric Flair already in the ring and Hulk Hogan/Jimmy Hart in mid-entrance.

Ricochet dives onto McIntyre before the bell and then does it again after the bell, though the second one aggravates Ricochet’s taped up ribs. Drew drops him ribs first onto the top and kicks said bad ribs to make it worse. An overhead suplex drops Ricochet on the ribs again, setting up the big boot and legdrop. McIntyre goes outside to get in Hogan’s face for some trash talk.

Back in and the abdominal stretch goes on, followed by the release suplex to drop Ricochet on his back again. One heck of a backdrop (with Ricochet doing his crawling through the sky motion) and a Razor’s Edge buckle bomb lets McIntyre mock Hogan’s pose. Drew charges into two boots in the corner and a kick to the face gives Ricochet two as we take a break.

Back with Ricochet making the comeback with strikes to the face and an enziguri for the double knockdown. The springboard clothesline into the Lionsault gets two but Ricochet can’t get him in a fireman’s carry. Instead it’s the reverse Alabama Slam to give Drew his own two and the Glasgow Kiss drops Ricochet again. Drew throws him off the top but the Claymore is cut off with a jumping superkick. The 630 misses so here’s Randy Orton for the RKO on Ricochet for the DQ at 17:01.

The OC didn’t think much of Humberto Carrilo’s debut match last week and if he wants to face the real champion, he can fight AJ Styles later.

Non-title and that would be Rizzo and Bryant, two guys in Cubs jerseys. Rizzo bails to start (Lawler: “They’ve already gone to the bullpen.”) and the beatdown is on in a hurry. The jersey is ripped off during the beatdown and the fans are rather pleased. The powerbomb/World’s Strongest Slam plants the Cubs at the same time and it’s the Viking Experience for the pin at 2:01.

Sin Cara is ready for his rematch with Andrade and brings in a luchadora named Carolina to counter Zelina Vega.

Cara dives over Carolina to get in the ring. An early headscissors puts Andrade on the floor but he gets shoved off the top. Zelina even gets in the Tranquilo pose on the floor for a great bonus. An other the shoulder backbreaker sets up a seated abdominal stretch. Andrade’s running knee hits buckle though and he crashes to the floor, setting up the big dive from Cara. Back in and something like a spinning Canadian Destroyer hits Andrade but the women get in a fight on the floor, with Vega being sent into the barricade. Andrade uses the distraction to grab a rollup with his feet on the ropes for the pin at 3:13.

Charlotte chops away at Peyton to start and it’s a double suplex to give Natalya two. Billie comes back in for an armbar on Natalya and it’s back to Peyton for a half nelson with her legs in the ropes. A spinning kick to the face gives Peyton two more and the bulldog onto Billie’s knee gets the same. Billie goes after Charlotte though and Natalya gets in the Sharpshooter for the tap at 4:45 with Charlotte spearing Peyton down.

Seth Rollins is ready to get fired up for Crown Jewel by facing Erick Rowan in a falls count anywhere match tonight. Rollins is going to have to beat the Fiend because no one will be able to stop the match.

Non-title and falls count anywhere. Rollins charges at him to start and gets tossed into the corner for his efforts. A low bridge puts Rowan on the floor, where he is fine enough to send Rollins into the barricade a few times. The big boot gives Rowan two on the floor and they fight into the crowd.

Rowan clears the announcers’ table but gets caught with the Stomp onto said table for the delayed two. Rollins finds a chair and they fight into the back with Rowan sends him into a pile of pipes. A ladder to the ribs takes Rowan down and the Stomp onto the ladder sets up….the Halftime Heat finish as Rollins has a forklift lowered onto Rowan for the cover and the pin at 15:05.

Aleister Black wants another fight and promises to give them an intimate relationship with fear.

We look at Brock Lesnar attacking Rey Mysterio and Cain Velasquez on Smackdown.

Non-title. Carrillo starts with the flipping and hammers away in the corner, setting up a springboard headbutt for one. A Disaster Kick gets two and they head outside with AJ driving him into the barricade. The tornado DDT on to the floor knocks Carrillo silly and we take a break.

Back with Carrillo fighting out of a chinlock and hitting another springboard kick to the face. The Aztec Press gets two on AJ but he’s right back with the reverse DDT for two of his own. Carrillo drops him again though and a huge moonsault gets another two. It’s back to the air but this time AJ shoulders Carrillo in the knee on the way down. The Calf Crusher makes Carrillo tap at 9:24.

Post match AJ disrespects Carrillo and gets hit in the face, only to have AJ kick him in the leg. The Styles Clash plants Carrillo. The beatdown seems to be on from the OC but the Street Profits make the save. The OC bails.

We recap Bobby Lashley and Lana’s affair to destroy Rusev and Lana’s marriage.

It’s time for the King’s Court with Lana and Rusev, the latter of whom is still wearing his wedding ring for the sake of some hope. Lana says she is tired of being harassed by the fans but the truth is that their marriage was all about Rusev wanting sex. Rusev: “Well can you blame me?”

Apparently Rusev is a sex addict who just wanted to impregnate her. That isn’t happening because she won’t be able to get modeling work if she’s pregnant. Oh and Rusev cheated on her, which Lashley told her about. Rusev denies the whole thing so here’s Lashley, with Lana running off. The fight is on with Lashley going into the steps and they head back inside.

Lashley’s spear is cut off with a superkick and Samoan drop, allowing Rusev to take off the wedding ring. He asks Lana if this is what she wants and stuffs the ring in Lashley’s mouth. Lana finds a kendo stick and hits Rusev for no effect so he yells at her, allowing Lashley to hit him low. Kissing ensues to end the show. 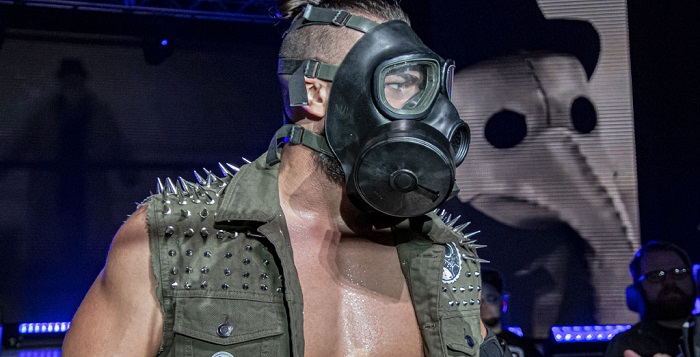