It’s time to start picking things up a lot again around here as Becky Lynch is going to make some kind of major announcement. That sounds like she might be dropping the title, and really that might be the only option as it’s hard to imagine almost anyone beating her. Other than that, it’s hard to say what we’ve got coming up on the way to Backlash next month. Let’s get to it.

We open with a long recap of the Money in the Bank ladder matches with Asuka and Otis winning the briefcases.

Here’s an emotional Becky Lynch without the title but with the Money in the Bank briefcase. She’s upset about something and needs to go away for awhile. That’s why she made asked the powers that be around here to raise the stakes last night. Cue Asuka to scream about the briefcase, but Becky opens it up to reveal the title, which now belongs to Asuka because the ladder match was for the title, not an opportunity at the title. Asuka freaks out and celebrates around the arena. Becky: “You go be a warrior, because I’m gonna go be a mother.” Asuka stops and hugs Becky before chanting her name in a great moment.

Post break a bunch of wrestlers come in to congratulate Lynch on the news.

No DQ. Lashley throws him around to start but gets knocked outside, setting up a suicide dive. That’s knocked away so Lashley grabs a chair, which is dropkicked into his face as we take a break. Back with Carrillo missing a baseball slide but avoiding a big boot and kicking Lashley in the head. A dive off the barricade is pulled out of the air and Carrillo gets posted hard. Carrillo gets the chair though and unloads, only to get caught in a full nelson to make Carrillo tap at 8:40.

The Street Profits are ready to meet the Viking Raiders….in a game of basketball.

The Raiders don’t know why they’re doing this and think karaoke might work. Oh and worry about fouls.

Video on Edge vs. Randy Orton at Wrestlemania.

We look back at Apollo Crews getting injured against Angel Garza.

Zelina Vega and company are arguing in the back.

Joined in progress with Garza sending him into the corner and TAKING OFF HIS PANTS. A loud chop in the corner connects as Vega is arguing with Andrade and Austin Theory at ringside. Tozawa snaps off a hurricanrana but gets caught with a pop up kick to the chest. A penalty kick gives Garza two and he loads up the Wing Clipper, yells at Theory, and plants Tozawa for the pin at 2:45.

Post match the team keeps arguing but here’s Drew McIntyre to interrupt. McIntyre is ready to fight and Claymores Theory. Garza and Andrade laugh so it’s a Claymore to Garza, followed by a staredown with Andrade.

Non-title. McIntyre works on an armbar to start and shouts at Vega a bit. Back up and McIntyre hits a kick to the ribs out of the corner to send Andrade outside. Andrade charges into a tilt-a-whirl slam onto the apron as this is one sided so far. Andrade dives under the ring and reaches through the ropes that hold it together to pull McIntyre into the apron.

A baseball slide hits McIntyre in the ribs before Andrade starts in on the arm. Double knees to said arm get two but McIntyre is back with a sitout powerbomb for the same. McIntyre gets sent into the corner for the running knees but the hammerlock DDT is countered into a Glasgow Kiss. The reverse Alabama Slam sets up the Claymore for the pin at 8:34.

Post match Drew says he didn’t come out here for a match but anything can happen on Monday Night Raw. He’s always up for a Claymore party, but he’s here to talk about something else. Last night he was in a heck of a fight with Seth Rollins. He still has the title though and now he has some more exciting news. There is something called the Brand To Brand Invitation, meaning that a wrestler from Smackdown has challenged Drew to a match and it has been accepted. That’s why next week, live on Raw, it’s Drew vs. King Corbin.

MVP asks Lashley when he last had a WWE Title shot. That would be 2007, when MVP was just getting started. Now MVP is back and Lashley is in the same place. When is the real Lashley coming out? MVP walks off and runs into Lana, who he says should let Lashley free. Lana screams. A lot.

It’s time for A Moment Of Bliss with Bliss saying the Man is having a baby. Nikki: “The Man becomes the mom!” Nikki wishes all of the mothers a happy belated Mother’s Day but here are the returning IIconics to interrupt, with Nikki imitating their pose. Peyton doesn’t like being disrespected and the title challenge is on. Nikki says the titles are like their babies so Billie says we can make it non-title. They are the future because they are ICONIC.

Nikki kicks Peyton to the floor to start and ties her in the ring skirt for the beating. Back in and the IIconics get Cross into the corner for the double teaming. Some rollups give Nikki two but Peyton kicks her down for two. Billie grabs the chinlock and hands it back to Peyton, who gets slammed in a hurry so Nikki can tag Bliss. House is cleaned in a hurry and it’s Insult To Injury for two on Billie. Everything breaks down and a shot to the throat staggers Bliss. Nikki is sent outside and something like a reverse Magic Killer finishes Bliss at 4:28.

Rey Mysterio, who was thrown off the roof last night, reveals that he landed on a lower roof six feet below so he and Aleister Black are teaming tonight. Seth Rollins, one of Rey’s opponents tonight, comes in to glare at Rey, who congratulates him on becoming a father. Rollins walks away from a handshake.

Truth dances into the splits to start and makes Thorne sit down in pain. It’s off to Ricochet as Truth becomes Pretty Ricky (crossed eyes, big teeth) on the apron. Vink comes in to elbow Alexander in the face and the pace slows a bit. The chinlock goes on for a bit, followed by Thorne coming inf or a kick to the back.

Thorne grabs the neck crank and hands it back to Vink, who is kicked in the head. The hot tag brings in Truth (yes Truth, not Ricky) so house can be cleaned on MVP. Everything breaks down and Ricochet moonsaults onto everyone but MVP and Truth. Ricky comes back so MVP knocks out his big teeth, only to get caught in the Lie Detector for the pin at 4:31.

Post match here’s Lashley to spear Truth down and put him in the full nelson. Lashley leaves with MVP.

We look back at Becky’s announcement.

Shayna Baszler can’t believe Becky threw away her career to grow a parasite. Shayna: “Do we know who the father is?”

We look at the first part of the Last Ride.

Becky and Vince McMahon have a moment we can’t hear.

Rollins on the other hand seems to be in a trance with his hair all over the place. Black grabs an Octopus on Murphy, followed by a hard armdrag into an armbar. Murphy tries to fight back but Black moonsaults into his sitting position to stare him down. An elbow to the face rocks Black as Rollins still hasn’t moved an inch.

Black knees Murphy out to the floor, with Rollins registering nothing. Another big knockdown sends us to a break. Back with Murphy diving into a knee to the face to put them both down. Rey comes in with the seated senton and the springboard spinning crossbody. Murphy’s Law is countered into the sitout bulldog for two but Murphy sends him into the corner. That means Rey knocks Rollins off the apron so Rollins breaks up the 619…and that’s a DQ at 11:00.

Result: Aleister Black/Rey Mysterio b. Seth Rollins/Murphy via DQ when Rollins attacked Mysterio in the ropes (11:00)

Post match Rollins destroys Mysterio and hits him in the eye. Black gets sent over the barricade and Rollins orders Murphy to step back. Rollins sends Rey face first into the steps and the eye is busted open.

The Viking Raiders practiced basketball without much success.

Dawkins knew white men couldn’t jump but they weren’t sure about vikings. It’s 49-0 late in the third quarter and Ford hits a three from half court. Erik picks Ivar up and calls a foul on himself. The Vikings score late and claim a victory, despite the score being 74-2 with the Vikings having committed 19 fouls.

Natalya doesn’t like Shayna disrespecting motherhood but Shayna says Natalya will never have a kid. The Hart Dynasty dies with her.

Back on the basketball court, it turns out that the Raiders were faking and are quite good at basketball, including Ivar being able to dunk.

Natalya takes her down to start but Shayna drives her into the corner and dances a bit. That earns her some applause from Natalya, who tries to roll her into the Sharpshooter. That’s broken up so Baszler misses the stomp on the arm, only to knee Natalya in the head for the pin at 3:57.

King Corbin doesn’t feel bad about throwing Black and Mysterio off the roof because they’re fine. He’s able to take Drew on next week because Corbin made him the champion. Next week, Corbin is taking him out.

Next week: the IIconics get a Women’s Tag Team Title shot.

Edge hid behind other wrestlers at the Royal Rumble and then incapacitated Orton at Wrestlemania. He might not have gotten up at ten but it didn’t take him nine years to make it back. Orton talks about how Edge hasn’t had a regular match since 2011 and his grit and passion won’t help him there. If Edge has the guts, they’ll have a straight up wrestling match at Backlash. Edge doesn’t say anything but Charly says if it happens, it might be the greatest wrestling match ever. 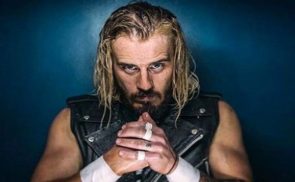