It’s the go home show for Hell in a Cell and there are only four matches set for the card. In theory we should be getting more matches announced this week, but WWE has a habit of leaving some of the build until the very end at times. On top of that, we have the continuing adventures of Lily the evil doll. Let’s get to it.

We open with Alexa Bliss recapping the Lily/Shayna Baszler incident from last week. Bliss has put Lily in time out this week but she will see Shayna on Sunday. Nia Jax comes in and says they used to be friends but now Bliss needs to leave Shayna alone. Bliss laughs it off and Nia challenges her for tonight. The match is made.

Charlotte is ready to get rid of Cross to move on to Rhea Ripley on Sunday.

The bell rings and here is Rhea Ripley 14 seconds in to watch from the stage. Cross rolls her up for one but gets kneed out to the floor, where Charlotte kicks her into the barricade. Back from a break with Charlotte hitting a clothesline but shouting down to Ripley. Some chops put Cross in the corner but she fights back for a change. Charlotte knocks her outside in a heap and gets in a few more shots….but stops to yell at Ripley and gets counted out at 7:50.

Post match Charlotte jumps Cross but Ripley makes the save with Riptide.

Jeff Hardy tells Riddle to respect his elders in the tag division and listen to Randy Orton. Hardy has a match with John Morrison tonight and freaks Riddle out with the double eyes. Riddle goes on a long bit about what he would do with four arms but Hardy leaves. Orton comes in to offer some advice, so Riddle asks if Orton likes him. Orton: “No.”

Miz joins commentary and Morrison gets in a Drip Stick shot to put Hardy in early trouble. A cartwheel clothesline drops Hardy again…and here is Cedric Alexander. Hardy grabs a rollup for two and gets a boot up in the corner. A splash gives Hardy two and they fight to the apron with Morrison dropping him throat first across the top rope. Starship Pain finishes Hardy at 2:50.

Post break Cedric goes on a rant about how Hardy beat him last week but acted like a sore winner. The only think he’ll apologize for is not putting Hardy in a retirement home. Hardy grabs the mic and says he’ll retire if Cedric can beat him right now.

Cedric starts in on the knee, including a dragon screw legwhip over the ropes. The half crab doesn’t last long as Hardy sends him into the corner for a slingshot dropkick. Alexander is back with a Michinoku Driver for two but misses his own Swanton. The Twist of Fate sets up the Swanton to finish Alexander at 2:49.

Or not as Eva brings out the unnamed Piper Niven to wrestle in her place.

Due to “it’s NXT UK”, commentary has no idea who Niven is. Niven runs her over to start and hits a release World’s Strongest Slam. A backsplash into a Michinoku Driver gives Niven the squash win at 36 seconds.

Dana Brooke and Mandy Rose were having a photo shoot but got distracted by Natalya and Tamina training in a ring. They got in an argument about looks vs. skills and a brawl broke out. Referee break it up.

Drew McIntyre dubs Bobby Lashley as Trashley but for tonight, the focus is on AJ Styles. The Scottish are known for their strategies though and we hear about William Wallace. Now what does this have to do with facing Lashley? Drew: “Nothing. I just love that story!” He’ll win on Sunday.

Riddle has to keep the scooter slow so Orton can keep up with him, while also singing Orton’s song. Riddle chokes Woods to start but gets dropped onto Kofi’s knee for an atomic drop. Woods works on the arm but it’s off to Orton for a fight over a top wristlock. It’s off to Kofi for a frog splash crossbody and New Day clears the ring as we take a break. Back with Woods hitting a running forearm but getting caught with a jumping knee.

Orton grabs the armbar and it’s back to Riddle to try for a cross armbreaker. With that not working, Orton comes back in to stomp away. We hit the chinlock again with Woods fighting up and bringing Kofi in to clean house. The jumping clothesline drops Orton to set up the Boom Drop but a quick tag brings in Riddle to kick away. A ripcord knee sets up the Floating Bro for two on Kofi and we take a break.

Back with Woods crotching Riddle on top and hitting a superplex. Kofi’s frog splash gets two but Orton dives in for the save. Riddle’s small package gets two on Kofi and he northern lights suplexes Woods for the same. An assisted powerbomb (ala two thirds of the Shield) gets two more on Woods but Kofi saves him from the ahnging DDT.

Orton gets knocked into the corner and it’s back to Riddle, who can’t muscle Woods up for an apron German suplex. Instead Woods takes him into an electric chair for a top rope double stomp (making it a modified Doomsday Device) for a very near fall. Orton tags himself in but can’t hit the RKO on Woods. He can however counter the Honor Roll into the RKO for the pin on Woods at 21:43.

We look at Charlotte screwing up against Nikki Cross earlier.

Rhea Ripley thinks Charlotte is obsessed with her. After Sunday, Charlotte is going to the back of the line. She has to face Asuka tonight though so the interview is over.

Non-title. Asuka grabs a headlock to start and sends Ripley into the corner, meaning it’s time to dance. Ripley gets two off a crucifix and hits Asuka in the face, only to get pulled into an Octopus. That’s broken up as well so Asuka strikes away again before avoiding a running dropkick in the corner. They fight outside with Asuka being dropped onto the barricade as we take a break.

Back with Asuka hitting a middle rope missile dropkick and sending them into a strike off. A knee to the face gives Asuka two and the hip attack gets the same. Ripley grabs a northern lights suplex for the same but Asuka is back with a running kick to the face. A YES Kick is countered into some knees to Asuka’s chest and the Prism Trap goes on. That is reversed into a faceplant but the Asuka Lock is countered into the Riptide to finish Asuka at 10:47.

Post match here is Charlotte to go after Ripley and the brawl is on until security breaks it up. They keep going after each other and Charlotte’s nose was busted open somewhere in there.

MVP does not like Kevin Patrick trying to interview Bobby Lashley. The champ isn’t working tonight because he is the WWE Champion, but he does promise to publicly execute Drew on Sunday.

Bliss kicks away to start and chokes away in the corner. After a creepy spider walk, Bliss avoids a running kick in the corner and hammers away. Jax runs her over for a change and we hit the chinlock. Back up and a running clothesline takes Bliss down but she sits up to avoid the legdrop. That means a glare into the camera and a kick to Jax’s head. Cue Reginald for a distraction but Bliss dropkicks Jax’s knees out instead. A short DDT sets up Twisted Bliss but Reginald comes in for the DQ at 3:57.

Post match Bliss glares at Reginald and, with the force of a thousand camera cuts…..Bliss just walks away when Nia gets up.

MVP is talking to New Day and suggests that Kofi Kingston is losing because Xavier Woods is the weak link. New Day doesn’t want to hear it and Kofi gives a fired up speech about how his friends helped get him here. MVP wishes him luck on Sunday….but then remembers Kofi doesn’t have a match on the show. Woods: “Kick rocks dude.”

Earlier today, Ryker said Elias was holding him back.  Elias goes right at him to start but gets clotheslined down. The chops in the corner have Elias rocked and something like a spinebuster drops him again. They head outside with Elias getting posted….and taking the countout at 2:28.

Video on the Cell.

Bobby Lashley, MVP and the ladies sit on the couches on the stage while Omos is here with Styles. McIntyre drives him into the corner to start but AJ comes back chopping away. A big chop is blocked and a heck of a backdrop has AJ in more trouble. Futureshock connects but McIntyre stops to glare at Lashley, allowing Omos to pull AJ outside. Cue the Viking Raiders and we take a break.

Back with Styles being sent hard into the corner and getting caught with a tilt-a-whirl backbreaker for two. Styles manages to send him outside in a heap and, back in, cuts off a charge with some raised boots. The chinlock slows McIntyre down a bit but he jawbreaks his way to freedom.

McIntyre fights up with some elbows to the face for two and a Michinoku Driver gets the same. McIntyre’s superplex is countered though and Styles fireman’s carries him onto the knee for two of his own. Back up and McIntyre drops him with a shot to the face but goes outside to jump Lashley. McIntyre heads inside but Lashley comes in for the DQ at 13:31.

Post match the big brawl is on, with Lashley being suplexed on the floor.

This starts as a handicap match as Lashley is in the back changing out of street clothes. Ivar takes AJ into the corner and it’s Erik coming in to crush him for two. Cue Lashley to run down the ramp and send McIntyre hard into the barricade. Lashley comes in to hammer on Erik but it’s right back to AJ…who brings Omos in to knee Erik in the corner. A Downward Spiral plants Erik and Lashley goes after McIntyre, but the distraction allows the tag back to Ivar.

The pace picks up as Ivar flips away from Lashley but charges into a spinebuster. It’s back to Omos so Ivar comes up swinging, only to get shouldered down. We take a break and come back with Lashley unloading on Ivar in the corner and grabbing a neck crank. Ivar fights up but gets taken down again, setting up a chinlock from AJ. That’s broken up and we get the double tag to set up Omos vs. McIntyre.

Omos chokes him down but McIntyre comes up with right hands. Styles tags himself in but gets caught in some overhead belly to belly suplexes. Everything breaks down and Erik dives at Omos on the floor….where he is tossed into the timekeeper’s area. AJ intentionally (Maybe?) avoids tagging Omos to tag in Lashley instead, allowing McIntyre to hit the Claymore for the pin at 13:38.

McIntyre promises to see Lashley in h*** to end the show. 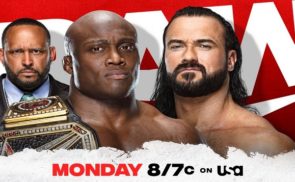 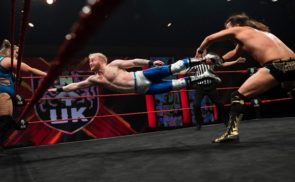