It’s time to find out how bad Raw can get this week, which tends to be the new low every week. Last week’s show was one of the biggest head scratchers I’ve seen in a very long time and it could be terrifying to see just how low things can get. We are less than a month away from Summerslam and it’s time to build things up. Let’s get to it.

We open with a recap of last week’s Women’s Title match and Nikki Ash cashing in Money in the Bank to win the title.

Here is Nikki Ash to get things going. She finally gets to welcome us to Raw and talks about how she didn’t believe she could get here. Nikki has worked to get here and once she finally started believing in herself, she accomplished her goals. If she can do it, everyone can do it and we can all be almost superheroes. Cue Charlotte to talk about how last week wasn’t fair and she is getting her rematch at Summerslam. Charlotte knows that everyone is tired of having people better than them around but they need to get used to it.

Cue Rhea Ripley, now smiling and high fiving (a few) fans. Ripley talks about how Charlotte only held the title for a day and promising to win the title herself. Nikki asks why she is being left out and here are Adam Pearce and Sonya Deville to interrupt. The triple threat match is on, and we’ll throw in Nikki vs. Charlotte tonight as well. Charlotte jumps Ripley but gets knocked outside by Nikki, who stands tall.

Non-title but Priest gets a shot if he wins here. Sheamus shoulders him down to start so Priest is back with an armdrag into an armbar. Back up and Priest sends him outside, where Sheamus drops him onto the apron. We take a break and come back with Priest fighting out of a chinlock and hitting a heck of a clothesline.

Another shot knocks off Sheamus’ mask but he gets his boots up in the corner to cut Priest off. Sheamus goes up but gets chokeslammed down for two. Back up and Sheamus grabs an Alabama Slam for two, meaning it’s time for the Texas Cloverleaf. That’s broken up by some kicks to the head so Sheamus knees him in the head for two more. Priest kicks his way out of the forearms to the chest though and the Reckoning is good for the pin at 10:05.

Post match Sheamus shouts that he rebroke his nose and he wants a doctor.

Omos and Styles are defending. Ivar starts fast and runs Styles over, including the seated senton out of the corner. Erik drives Ivar into Omos to knock him off the apron and the Viking Experience connects early. Omos breaks that up at two and sends the Raiders into the barricade to take over in a hurry.

We take a break and come back with Omos cranking on Erik’s head. That’s broken up and it’s back to Ivar to clean house. The cartwheel gets Ivar away from the Phenomenal Forearm and he runs AJ over again. Ivar’s charge in the corner hits boots though and AJ gets two off a tornado DDT. Erik comes back in to run AJ over but a Pele kick drops him again. The hot tag brings in Omos and the double chokebomb crushes Erik. AJ’s springboard 450 retains the titles at 8:35.

We recap Jinder Mahal and company attacking Drew McIntyre in Money in the Bank. As a result, McIntyre annihilated part of the company last week.

Here’s Drew McIntyre for his match with Veer but here are Jinder Mahal and someone in a suit instead. Mahal talks about how Shanky was taken out by an angry McIntyre, so this man is Mahal’s lawyer. McIntyre is being SUED, so McIntyre can do the right thing. That makes Drew think: should he take everyone out for a steak dinner and apologize? Or should he beat Veer down just as bad? McIntyre asks for a DREW IS GONNA KILL YOU chant and we’re ready to go.

They slug it out to start with Veer actually dropping McIntyre with a right hand and a slam. The jumping elbow sets up a neck crank but McIntyre fights up. Jinder Mahal throws in a chair, which is Claymored into Veer’s face for the DQ at 3:50.  Actually Veer is disqualified for bringing the chair in.

Result: Drew McIntyre b. Veer via DQ when Veer picked up a chair (3:50)

Non-title, but it’s a CHAMPIONS CONTENDER match. Doudrop takes Natalya down for two to start and Natalya comes up favoring her knee. It’s off to Tamina, who gets taken down by Doudrop. Eva comes in to get the cover…and Alexa Bliss takes over the screen for a video on the Lillylution. The distraction lets Tamina hit the superkick for the pin on Eva at 3:10.

Non-title. Kross can’t pick him up to start but Lee can toss him with a release belly to belly suplex. A clothesline puts Kross outside, where he posts Lee to take over. Kross hits his own suplex on the floor and we take a break. Back with Kross choking in the corner and hitting a DDT for two. The Krossjacket Choke goes on but Lee powers out of it and starts hammering away. Lee hits the hard running shoulder but the Spirit Bomb is countered into the Doomsday Saito. The running forearm to the back of the head sets up the Krossjacket to make Lee eventually tap at 8:52.

We recap Nikki Ash winning the Women’s Title, plus her big celebration.

Nikki Ash believes in herself and no one can take away that feeling, win or lose. She wants all the boys and girls to believe that things are worth fighting for and no matter what, she will be defending her title at Summerslam. Rhea Ripley comes in to says he can respect the confidence, but she is leaving with the title. Tonight though, she wants Nikki to give Charlotte h***.

Mace and T-Bar are ready to eat the smaller people, because people like Mansoor and Mustafa Ali exist to be devoured by them.

Before the match, Mansoor talks about wanting to show how good the team can be. Ali says follow his lead, get the win, and we’ll see about the future. Ali hammers on T-Bar to start but the Cyclone Boot kicks Ali’s head off for two. Mace comes in to plant Ali with Mansoor having to make a save.

That earns Mansoor a shot to the floor and a running big boot gets two on Ali. A shot to the face gets Ali out of trouble and he brings Mansoor in to take over. T-Bar makes a save of his own and sends Mansoor outside, where Ali hits a suicide toando DDT for the save. Ali yells at Mansoor for not being ready but Mansoor saves him from a chokeslam. A victory roll gives Mansoor the pin on Mace at 3:04.

Here are Bobby Lashley and MVP to respond to Goldberg’s challenge (which Lashley already did on Twitter last week). MVP recaps the challenge and asks Lashley for his answer. Lashley isn’t going to dignify that with a response, but says this is his ring. Cue Cedric Alexander to say he didn’t like the disrespect when Lashley broke up the Hurt Business. Now it’s Shelton Benjamin coming out to say Alexander’s voice is annoying before challenging Lashley as well. Lashley says he’ll fight them both at once.

Non-title and Lashley runs them over to start. Cedric is sent outside, leaving Lashley to go after Benjamin. Back in and Cedric trips Lashley up, allowing Benjamin to hit a running knee. A springboard tornado DDT plants Lashley for a double two but he is back up with the spinebuster to Alexander. The spear cuts Benjamin down and it’s a Jackhammer to plant him again. The Dominator puts Alexander onto Benjamin for the double pin at 2:44.

John Morrison and the Miz are ready to make this city Moist AF but AJ Styles and Omos interrupt. They have something to talk about, with AJ doing the talking and Omos blocking out the camera.

Miz is here too and it’s a Drip Stick to Saxton before the match, which actually makes him sound angry. Riddle takes him down by the leg to start and snaps off a suplex for two. The kicks in the corner rock Morrison and a fisherman’s suplex gets two more. Miz Drip Sticks Riddle so it’s a jumping knee to Morrison. Riddle kicks Miz down, turning the wheelchair over. That means mocking Miz for being stuck on his back as we take a break.

Back with Miz upright and Riddle striking away in the corner. The threat of a running kick in the corner sends Morrison outside, where Riddle hits a springboard flip dive. Cue AJ Styles and Omos so Morrison can get in a shot to the face for two of his own. That just earns Morrison the Final Flash for two and Riddle goes up top….as Omos breaks the scooter. The distraction lets Morrison grab a Razor’s Edge spun into a hard slam. Starship Pain finishes Riddle at 9:56.

Post match (after Miz sprays the Drip Stick in celebration) Styles stomps on Riddle and plants him with the Styles Clash.

Reginald, with an unseen trampoline to get him over the top, is defending and Truth has a headset on. Truth hits him in the face and takes Reginald’s jacket off, so Reginald flips into the corner. Some shots with the coat miss due to some well timed flips and Truth misses a charge into the corner. The side kick misses as well and Reginald’s running flip seated senton is good for the pin at 1:31.

Post match the usual gang are here to go after the title so Reginald flip dives to the floor and backflips up the aisle.

Non-title and Charlotte chops her into the corner to start. Charlotte goes after the mask and chokes on the ropes to keep Nikki in trouble. Nikki is sent outside, allowing Charlotte to ask if this is your champion. Back in and Nikki’s comeback is cut off in a hurry, as Charlotte fires off more chops. Some rollups give Nikki two each and a headscissors sends Charlotte outside. There’s a dropkick through the ropes but Charlotte throws her over the announcers’ table as we take a break.

Back with Nikki still in trouble so Charlotte can grab the chinlock. Nikki fights up and hits a quick crossbody for a breather so Charlotte misses a bit boot. The leg is snapped across the top but she blocks the sunset flip without much effort. There’s a bulldog for two on Charlotte but she chops Nikki into the corner. Nikki is sat on top, only to come back with a tornado DDT. Charlotte rolls through the high crossbody though and pins Nikki at 12:33.

Post match Charlotte laughs at Nikki and grabs a mic to say no one is in her league. Nikki grabs the mic and says she knows she lost but she showed she ALMOST could have won. Therefore, Charlotte gets a rematch next week. Charlotte accepts and beats Nikki down again, yells some more, and drops her one more time to end the show. 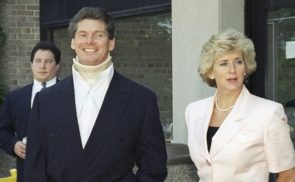