We are finally, and I do mean finally, coming to the end of the Thunderdome and that means a taped go home show for Money in the Bank. The card is mostly set, at least on the Raw side, but it is time to build some serious momentum for the show’s namesake matches. Maybe Nikki Cross can even take another pin. Let’s get to it.

In Memory of Paul Orndorff.

We open with a long recap of Big E. vs. Kofi Kingston, including last week with the New Day beating Lashley and MVP.

Non-title with Kofi Kingston/MVP at ringside. Lashley throws him into the corner to start but Woods takes the leg out. A step up backsplash gets two but seems to just annoy Lashley. They head outside with Lashley sending him hard into the steps as we take a break.

Back with Woods still in trouble but managing a superkick. A tornado DDT sends Lashley outside and there’s the big flip dive to take him out again. Back in and a missile dropkick puts Lashley down, followed by the Crossface to make it worse. That’s broken up so Lashley hits the huge spinebuster into the spinning Big Ending for no cover. Instead Lashley takes him outside for a hard ram into the post and the spear connects back inside. Lashley still doesn’t cover though….and gets small packaged for the pin at 10:19.

Lashley stormed off during the break.

Post break, MVP says it’s not a big deal and Lashley had to blow off some steam. Lashley will be in the VIP Lounge later tonight.

We look back at Jinder Mahal and company stealing Drew McIntyre’s sword.

Mahal arrives and is handed the sword.

It’s time for Alexa’s Playground, with Bliss talking about how much fun she could have with the Money in the Bank briefcase. Eva Marie and Doudrop interrupt her, with Eva wanting to know when she’ll be asked a question. Alexa suggest Doudrop could win the briefcase and Eva storms off. Bliss doesn’t think much of them.

Here are Jinder Mahal and company with something, allegedly the sword, under a blanket. Mahal tells Drew McIntyre to come out here like a man and he can have his sword back. McIntyre pops up on screen instead, so Mahal pulls the blanket back to reveal the broken sword. That’s funny to McIntyre, because that’s a replica. The real thing is right here, just like Mahal’s real motorcycle is right here. McIntyre rips the motorcycle apart and Mahal panics.

Riddle runs into Nikki Ash, who he thinks should just fly up to grab the briefcase. This turns into a discussion of Riddle thinking he could fly into space but he was just at the mall.

Nikki Ash vs. Alexa Bliss vs. Asuka vs. Naomi

Naomi sends Bliss into the corner for the shoulders to the ribs. Bliss is right back with a quick crossbody as Ash and Asuka come back in. Naomi and Asuka trade kicks to the face for a double knockdown and Bliss crawls back in to face Nikki. A double shot to the chest staggers Bliss but here are Eva Marie and Doudrop to watch. Bliss uses the distraction to DDT Asuka for two but it’s time to channel Doudrop. A scream scares Eva but Doudrop is back up to toss Bliss over the barricade. Eva goes over to look at her….and Bliss has disappeared as we take a break.

Back with Naomi stacking up Asuka and Ash for two. Asuka is sent outside and Naomi grabs her reverse Rings of Saturn. That’s broken up by Asuka’s kick to the back but Nikki breaks up Asuka’s cross armbreaker to Naomi. More rollups get two each until Naomi is sent outside, leaving Asuka to Asuka Lock Ash. This time it’s a reversal into a cradle to give Ash the pin at 13:02.

The Viking Raiders don’t like being called smelly barbarians and are ready for AJ Styles and Omos tonight.

Before the match, AJ, with Omos, apologizes for calling the Vikings smelly. He should have called them hairy and various other mean things. Tonight Ivar is tapping to the Calf Crusher and then Omos is beating Erik in his first singles match. Ivar spins around to start and runs AJ over, but an early Omos distraction lets AJ get in a kick to the head. The moonsault into the reverse DDT gets two on Ivar but Ivar fights up with a tilt-a-whirl powerslam. The low crossbody crushes AJ again and a big elbow to the face gives Ivar two. AJ scores with the Pele to send him into the corner but Ivar hits a seated senton for the quick pin at 3:43.

Erik tries a waistlock to start and is thrown down in a hurry. Omos runs him over again but Erick slips off the shoulders and kicks at the leg. A bearhug has Erik in more trouble and Omos throws him into the corner without much trouble. Erik is right back with some running shots to the face to stagger the giant. That earns him a hard clothesline and Omos gets to shout a lot. The two handed chokeslam finishes Erik at 3:24.

We recap Humberto Carrillo injuring Sheamus’ nose, putting him out of action for six weeks.

Sheamus, in a protective mask, yells at Sonya Deville and Adam Pearce for making him defend the title tonight. They don’t seem to mind.

Lucha House Party and New Day share some nice compliments in the back. Kofi Kingston is not surprised that Bobby Lashley will be back tonight for the VIP Lounge. Xavier Woods is a bit surprised, as Lashley already lost to the video game guy. Winning the WWE Title is not about the champagne and fame, but being a representative. After Sunday, Kofi gets to do that again.

Video on what Money in the Bank means for the winners. It’s like Rumble By The Numbers, but without the Rumble or Numbers.

Post break, Carrillo says he can go, even with Damian Priest asking if he is ok. Sonya Deville and Adam Pearce say they can postpone the match but Carrillo insists.

US Title: Sheamus vs. Humberto Carrillo

Sheamus is defending and wins with the Brogue Kick in 17 seconds.

Post match Sheamus comes back in to go after Carrillo again. Sheamus loads up a stomp to the face but Damian Priest runs in for the save.

We recap Ricochet vs. John Morrison over the last two weeks.

Riddle scooters up to Ricochet in the back and talks about how he is excited to go out west this weekend. He’s going to make spaghetti burritos and watch his favorite western movie: Toy Story 2. Riddle likes it when the cowboy finds a snake in his boot, not that Randy Orton is a snake in his boot. Ricochet was talking about the briefcase but Riddle thinks he and Orton can cash it in on the Tag Team Titles. John Morrison and Miz show up with Drip Sticks before running over Riddle’s foot.

Falls Count Anywhere and Miz is here with Morrison. Ricochet gets sent into the ropes to start and a neckbreaker over the ropes gives Morrison two outside. Miz uses his wheelchair to give Morrison two more and they head back inside. Morrison starts to go up but gets caught in a bridging German suplex for two. They head outside again with Morrison planting him for two, followed by a trip over the barricade.

Ricochet rams Morrison into the video fans and they climb onto the barricade. A slip sends Morrison down and Ricochet busts out a 450 off of said barricade for two. Back in and Morrison rolls away from the threat of a springboard allowing Ricochet to hit a shooting star forearm to the head in a big crash.

We take a break and come back with a ladder now bridged between the ring and the announcers’ table. Ricochet jumps over it to hit a forearm to drop Morrison for two. Morrison bails over to the other side, where he hides behind Miz’s wheelchair. That’s fine with Ricochet, who hits a big flip dive to take Morrison down for two more. They fight up to the stage where Ricochet gets two more and they head backstage. Morrison scores with a superkick and a running knee to the face for two and it’s back to the stage.

This time Ricochet knocks Morrison down the ramp but then stops to shove Miz’s wheelchair down the ramp. The distraction lets Ricochet run Morrison over for two, followed by a kick to the face back inside. The Drip Stick distracts Ricochet again though and Morrison grabs a rollup with his feet on the ropes for two. Morrison’s Moonlight Drive gets two but here is Riddle to turn Miz over in his wheelchair, leaving Miz on his back. Morrison springboards into the Recoil but Ricochet can’t cover. Instead he puts Morrison on the bridged ladder for a huge splash and the pin at 16:01.

Tamina and Natalya are ready for Money in the Bank as Natalya wants to hold the title and the briefcase at the same time. Mandy Rose and Dana Brooke come up to call Natalya a fool. Threats are made and Dana has to be held back.

Drew McIntyre’s history lesson of the week is about Icarus, who is going to fly towards the sun, which is the Money in the Bank briefcase. His wings are going to be made of Grade A Scottish beef and nothing is stopping him from becoming Mr. Money In The Bank.

We recap Rhea Ripley and Charlotte’s battle of the crutches last week.

Rhea Ripley is ready for Charlotte on Sunday.

Non-title and Tamina is here too. They go with the grappling to start and Natalya grabs some rollups for two each. Rhea takes her outside and hits a quick dropkick to Tamina as we take an early break. Back with Natalya being knocked off the top, allowing Rhea to hit a good looking missile dropkick.

Post match, Charlotte comes in to chop block Rhea and the Figure Four over the apron makes Ripley scream.

MVP preps the ladies for the VIP Lounge.

Charlotte promises to win the title.

It’s time for the VIP Lounge with a bouncing MVP saying this should be the Lashley Dome. Next week we are back on the road (which the fake fans appreciate) so here is Lashley….or at least MVP introducing him. Eventually cue a slightly disheveled Lashley to ask the women to leave. He doesn’t like what happened earlier and from now on, it is time to be serious again.

Lashley destroys the entire set, including throwing the love seat out with no trouble. Sunday is the end of Kofi Kingston, as Lashley is going to take care of him like he should have done a long time ago. Lashley leaves and MVP looks scared to end the show. 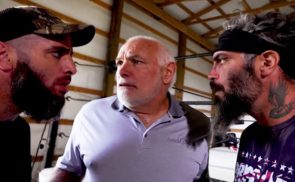