We are less than three weeks away from the Royal Rumble and the show is starting to come together. It seems that we have a pair of World Title matches and a good number of names set for both Royal Rumble matches. There are still some things that need to be done though and some of that should be taken care of tonight. Let’s get to it.

We open with a recap of Brock Lesnar becoming WWE Champion at Day One and Bobby Lashley becoming #1 contender last week.

Here are Brock Lesnar and Paul Heyman, with Bobby Lashley and MVP watching backstage. The Hurt Business comes up to Lashley and are glad to have the team back together. Lashley says not so fast because he works alone, with MVP nodding in agreement. Back in the arena, Heyman does the intro and Lesnar is happy to be here.

Cue Lashley and MVP to interrupt and the staredowns are on. MVP handles Lashley’s intro so Lashley can talk to Lesnar face to face. Lashley says Lesnar has been ducking him for twenty years, with Lesnar saying it is an honor for him (as in Lesnar) to be in the ring with him (as in Lesnar). Brock talks about winning titles all over the world in different rings, so it’s Lashley’s fault that they never met each other.

Lesnar asks how many threads MVP’s suit is, with Lesnar saying he is funny and money. He calls Heyman over and says…..knock knock. Heyman: “Brock Lesnar is doing a knock knock joke in Philadelphia. I thought I had seen it all. Who’s there?” Bobby. Heyman: “Bobby who?” EXACTLY! Lesnar calls Lashley a Brock Lesnar wannabe and walks away. Cue Shelton Benjamin and Cedric Alexander to jump Lashley but he leaves them laying in a hurry.

Riddle is trying to get ready for their Tag Team Title match but Randy Orton tells him to be serious. Orton writes TAG IN RANDY on Riddle’s hands and starts heading to the ring. Hold on though, as Riddle needs to know if Orton is a Pat’s or Geno’s guy. Orton picks Geno’s (cheesesteak place) and we’re ready to go.

RKBro is defending. Riddle tries to wrestle with Gable and gets taken down in a hurry. An armbar doesn’t work so well for Riddle as Gable is right in the ropes before it can get anywhere. Riddle knocks Gable outside and hits a big springboard Floating Bro to take him out as we take a break.

Back with Gable hitting a dragon screw legwhip on Riddle and handing it off to Otis. The Floating Bro gets Riddle out of trouble and the hot tag brings in Orton to clean house. Gable gets crotched on top and the top rope superplex brings him right back down. Otis makes a blind tag though and the World’s Strongest Slam to Orton gives Otis the pin and the titles at 9:24.

Damian Priest is in the Royal Rumble.

Priest and the Street Profits are ready for a six man tonight but they’re also ready to go after each other in the Rumble. For now though, they want the smoke.

Bianca Belair is ready to get the next shot at Becky Lynch.

Ford jumps over Crews to start so it’s off to Ziggler, who gets hit in the face. Priest comes in and cleans house, with the villains being knocked outside without much trouble. We take a break and come back with Crews gorilla pressing Ford. Ziggler’s chinlock doesn’t last long as Ford fights up and brings in Dawkins to clean house. Everything breaks down and Ford hits a big flip dive to the floor. That leaves Ziggler to Zig Zag Dawkins for the pin at 9:24.

Here is a dancing Seth Rollins for a chat. Rollins is happy to see Bobby Lashley and Brock Lesnar hit each other a lot because he’ll be ready to take the Universal Title from Roman Reigns. Cue Big E. to interrupt and make a reference to the Philadelphia Flyers’ mascot, which Rollins doesn’t get. Big E. gets to the point and enters the Royal Rumble so he can win the title back at Wrestlemania. Rollins laughs it off so Big E. thinks they should face off tonight. Actually let’s just do it right now. Rollins wants a referee out here and the bell rings.

Rollins starts fast with a dropkick but gets caught in a powerslam. Big E. gets knocked outside for a dive though and the fight heads to the floor. That’s fine with Big E., who hits the apron splash and we take a break. Back with Rollins slipping out of a powerslam attempt and taking Big E. down into a chinlock. That’s broken up and Big E. hits the Rock Bottom out of the corner but Rollins headbutts his way out of a belly to belly.

Big E. sends him to the apron and hits the spear to the floor as we take a break. Back with Big E. fighting up and snapping off the belly to belly suplexes. The Warrior splash connects but Rollins escapes another Rock Bottom out of the corner. Rollins hits a frog splash for two but Big E. powerbombs him down.

A Stretch Muffler goes on, sending Rollins straight to the ropes. Big E. plants him again for two more but another spear through the ropes hits knee. That means Rollins can go up, where he has to escape a super Big Ending. Big E. can’t hit a regular version either so Rollins has to miss a Pedigree attempt as well. Some forearms put Big E. down and there’s the Stomp for the pin at 17:56.

We look at the big announcement of most of the women’s Royal Rumble field.

That’s not what Ripley said but Nikki meant that she’s the better one. It’s great to know where Rhea’s head is, which is enough to make her leave. Ripley turns back to face her and the team seems to be done, but we do get a hug. Then Nikki turns on her and the beatdown is on, with Nikki saying superheroes don’t need friends.

Reggie has cheesteaks for himself and Dana Brooke, but he thinks someone is going after the 24/7 Title. Cue R-Truth with a trashcan containing Akira Tozawa, so Brooke and Reggie throw their food at….Tamina, who freaks out and turns over the trashcan. Reggie and Brooke run off, with Reggie running into Omos. Dana says let him down, which Omos actually does, albeit with a threat to Reggie.

Doudrop, now with a lot of makeup, wants the Raw Women’s Title.

Chokeslam and fireman’s carry drop connect, as Dana Brooke and Reggie watch in the back. The chokebomb finishes at 1:33.

We recap the opening segment, including Bobby Lashley wrecking the former Hurt Business.

Here is Edge for the Cutting Edge. We get straight to the point as he has what he describes as the most gorgeous and curvaceous guest he has ever had: the owner of thighs that could crack a coconut, Beth Phoenix. They’re ready to do some damage to Miz and Maryse at the Royal Rumble because Beth would fit in with the Broad Street Bullies (Philadelphia Flyers reference).

They have more titles between themselves than any other couple in WWE history, including Miz and Maryse. We see a video on Beth Phoenix’s career, including various wrestlers talking about her career and accomplishments. Edge gives her the floor and says if Edge was trying to butter her up for later, flattery will get you everywhere. Beth: “Down boy, down boy.” Beth is ready to destroy Miz and Maryse, who are just annoying.

Cue Miz and Maryse to insult Philadelphia and be ready to take car of Beth and Edge at the Royal Rumble. Edge mocks Miz for hiding behind Maryse to avoid the spear. Miz isn’t hearing it and has his own highlight video on Maryse. Back in the arena, Miz brags about what Maryse has done, but Miz and Beth respect the heck out of her. Edge: “But my wife can bench press a Buick.” Beth finds it funny that Maryse hasn’t been so eager to get involved now that Beth is back.

The time for apologies is long gone, and it is time to wreck Maryse for good, with the fans chanting au revoir. Miz laughs it off and tells Maryse to tell Beth what is going to happen at the Royal Rumble. Maryse walks off while Miz is hyping her up though, so Beth volunteers to beat Miz up at the Rumble instead.

We look at the Tag Team Title change.

Styles starts fast with a tilt-a-whirl backbreaker but Theory grabs a suplex for two. Back up and Styles dropkicks him to the floor but gets sent outside for his efforts. Theory’s dropkick looks even better and we take a break. Back with Styles slamming him down for two but having to check his tooth. Theory grabs a brainbuster onto the knee for two but Styles gets to the apron….where Grayson Waller jumps him for the DQ at 7:02.

Post match the beatdown is on but Styles clears the ring.

We go backstage to look at the curtain into the arena….and nothing happens. There’s your production gaffe, but then we catch up with Waller heading through the curtain and saying AJ is getting taken over tomorrow night.

Liv Morgan is tired of getting so close to winning but coming up short. She’s never giving up though.

Alexa Bliss is in therapy but can’t be fixed until she is willing to open up. We get a flashback of her time as the female Fiend, which makes her feel thirsty. She pours the entire pitcher of water and then breaks a bunch of stuff in the office. See you next week doc. Bliss has been gone for four months and the best thing they can think of is “let’s do the same thing”. What a brilliant idea.

Becky Lynch (who had to stand in the arena while the Bliss segment aired) isn’t worried about any of her potential challengers but will sit in on commentary for the match anyway.

They all punch each other to start until Doudrop suplexes Belair down hard. The two of them head outside so Morgan flip dives onto them. Back in and Doudrop crushes Liv in the corner but Belair breaks it up. Doudrop crushes both of them with a basement crossbody before dropping Morgan onto Belair for a double cover. The chinlock has Liv in trouble but she fights up and gets sent over the top for a crash into the steps.

We take a break and come back with Doudrop missing a charge into the corner and getting rolled up to give Morgan two. Morgan grabs the Rings of Saturn on Belair, who powers out after some hard pulling. Belair gets sent into the corner but Doudrop powerbombs Morgan hard. Belair breaks up the cover with a 450 before the one count and plants both of them down. The handspring moonsault hit both of them and the KOD gets….no count as Becky runs in for the save. Becky and Belair fight so Doudrop can hit a Banzai drop to pin Morgan at 14:42.

Post match Doudrop shoves Becky out to the floor to end the show. 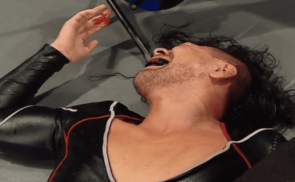 Current WWE Champion Injured, Has Not Wrestled In Nearly A Month 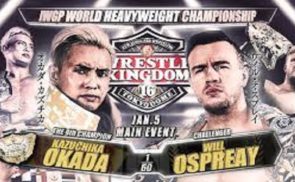