It’s the last Raw of the year and I’m not sure what that is going to mean. The big story coming out of last week saw Sheamus attacking Keith Lee, which did not sit well with WWE Champion Drew McIntyre. That would seem to be setting up a title match at the Royal Rumble, but we have over a month to hammer down the details. Let’s get to it.

In Memory of Jon Huber.

Here’s Drew McIntyre to get things going. McIntyre talks about how this has been a pretty crazy year for him. We hear about what he has done this year and next week is starting with a bang as he is defending the title on Legends Raw. Here’s Sheamus to interrupt and McIntyre doesn’t want to hear the platitudes. They have known each other for fifteen years and next week they are ready to face off for the title, like they have always wanted to. Sheamus says he just has to Brogue Kick Keith Lee tonight so they can start next year the right way.

Cue Lee (McIntyre: “You had to know this was coming.”) to say he didn’t like getting kicked in the head last week. He’ll wait for the bell tonight to extract an apology, but he does say Sheamus might stab Drew in the back. Sheamus says he kicked Lee last week for always running his mouth about how he was going to turn on Drew. The argument makes McIntyre say let’s get a referee down here and do this now. Sheamus Brogue Kicks Lee before the bell and Drew isn’t happy. Of note: McIntyre got in a Luke Harper “yeah yeah yeah” for a rather nice tribute.

The winner gets a shot at Drew McIntyre, on commentary, next week. Lee shoves him down to start but gets hit in the ribs, setting up a quickly broken armbar. Sheamus kicks Lee down again and stands on his face to set up an armbar. Back up and Lee suplexes him to the floor, setting up a posting. Sheamus knees him down on the way back in though and a top rope clothesline puts Lee onto the announcers’ table.

We take a break and come back with Sheamus hitting the ten forearms to the chest. Sheamus goes up top but misses an ax handle, allowing Lee to pounce him down. The spinebuster gives Lee two but the Spirit Bomb is blocked. Instead it’s something like a crossbody for two on Sheamus and a better version connects for the same. Back up and Sheamus manages White Noise but loses a battle of headbutts. The Grizzle Magnum sets up the Spirit Bomb to give Lee the pin and the title shot at 12:54.

Lee goes out to see McIntyre post match and the title is held up.

John Morrison and Lince Dorado are at ringside. Miz is rather distraught over losing the briefcase so Metalik grabs some rollups for early near falls. A headscissors sends Miz to the floor and there’s a dropkick to put him down again. Metalik adds a moonsault to the floor but Miz hits a big boot back inside. A second big boot sets up a reverse chinlock and Miz throws in a bunch of trash talk. Back up and Miz misses a shot, allowing Metalik to grab a sunset flip for the upset pin at 3:22.

Mandy Rose is in Brooke’s corner. Brooke slaps her in the face to start but the cartwheel splash hits knee. Baszler cranks the arm across the apron and slaps on an armbar back inside. The Kirifuda Clutch goes on from the floor with Mandy yelling at Baszler. The arm stomp misses so Brooke takes it back inside for a running flip neckbreaker for two. Brooke has to bail out of something off the top though and it’s a jumping knee into the Kirifuda Clutch for the tap at 3:32.

Long video on Randy Orton vs. the Fiend with Alexa Bliss hinting that the Fiend will be back.

Here’s Alexa Bliss with Alexa’s Playground. Bliss talks about how the Fiend is gone but he’ll be back someday. Maybe next week at Legends Raw, because he wants to meet his hero, Hulk Hogan. Fiend has been taking his vitamins and saying his prayers, but Bliss doesn’t want to know what he prays to. After her own “yeah yeah yeah”, Bliss introduces Randy Orton, who doesn’t come out.

Bliss does it again and again there is no Orton. Bliss finds this rude, but we go to the Firefly Fun House, where Orton walks through the door. That’s not cool with Bliss, and Orton makes it worse by kicking Huskus the Pig away. Orton laughs at the idea that the Fiend could come back and throws Mercy the Buzzard out the window, taking out Abigail in the process. Orton ribs Ramblin Rabbit’s head off as Bliss challenges Orton for tonight. Orton thinks this is where Fiend is supposed to return, so he accepts.

We look at Nia Jax attacking Charlotte to put her on the shelf six months ago.

Charlotte is ready for revenge, even against someone like Jax. Asuka comes in to celebrate the new year because Jax isn’t ready for Charlotte.

Omos and Jaxson Ryker are here too. AJ strikes away to start but gets caught with a backdrop for one. They head outside with Elias sending him arm first into the post as we take a break. Back with Elias hitting a top rope Meteora to set up a chinlock. AJ gets sent outside so Omos offers some intimidation.

They head back inside with AJ hitting the Phenomenal Blitz into the fireman’s carry backbreaker for two. Drift Away gives Elias the same but the Pele catches him on top. A quick TKO gives Elias another two but AJ goes to the apron for a forearm. The Phenomenal Forearm finishes Elias at 14:02.

We see a clip from Raw Talk with Ricochet talking about how frustrated he is with losing all the time. Something needs to change.

The rest of Retribution is here too. Ricochet hammers away to start and hits an early powerslam for two. The dropkick gets two but a Retribution distraction lets Ali knock him into the corner. Mace shoves Ricochet off the top for a crash and we take a break. Back with Ali grabbing a chinlock but Ricochet fights up and manages a moonsault into a German suplex to put them both down.

A hard clothesline drops Ali as well and the Kick Back connects, only to have Mace pull Ali out. The rest of Retribution gets on the apron so Ricochet tries a springboard DDT to T-Bar off the apron, which only somewhat connects and nearly kills T-Bar. Ali gets dropkicked into the post and another tornado DDT drops Mace with another scary landing. Back in and Ricochet’s shooting star press hits Ali’s knees, setting up the Koji Clutch to knock Ricochet out at 11:50.

Post match Ali offers Ricochet the chance to join Retribution, earning himself a no and the Recoil.

Nia Jax says she has some goals: beat Charlotte, get the Tag Team Titles back, and (Shayna Baszler: “There’s a #3?”) enter the Royal Rumble to go on to Wrestlemania. Baszler likes the sound of that idea.

Drew McIntyre says everyone has been waiting for Lee to step up, but he might not like what he finds up there. Lee can beat anyone when he is motivated, except Drew of course. See you next week.

Asuka and Shayna Baszler are here too. Nia powers her around to start so Charlotte grabs the arm. That’s broken up with power so Charlotte starts slugging away to knock her outside. Baszler and Asuka come over as Charlotte sends Jax into the post. Back in and the Figure Eight is easily countered with a shove into the corner and we take a break.

We come back with Jax hitting a sitout powerbomb (with the feed going black for a bit, possibly due to Charlotte’s gear having some issues) but Baszler and Asuka get into a brawl. Charlotte avoids the legdrop and tries the Figure Eight but Baszler comes in with the Kirifuda Clutch for the DQ at 10:52.

The Hurt Business chases off another random guy in the back.

Angel Garza has a rose when Charly Caruso comes up for an awkward reunion. Garza won’t say who the rose is for but here are R-Truth and the merry band of numskulls to knock the rose out of his hand. The petals are on the floor so Garza hands it to her anyway, saying it’s the thought that counts. Caruso doesn’t seem impressed.

We look at Big E. winning the Intercontinental Title on Smackdown.

Riddle, Jeff Hardy and New Day try to come up with a four man team name.

During the entrances, Bobby Lashley declares for the Royal Rumble so he can main event THIS YEAR’S Wrestlemania. Cedric Alexander dropkicks Riddle down to start but walks into a gutwrench suplex. Lashley comes in to shoulder Riddle down and it’s off to Shelton to drive him into the corner. Riddle takes Shelton into the corner for a change and the Unicorn Stampede is on, capped off by Hardy’s slingshot dropkick.

Everything breaks down and house is cleaned, with the Hurt Business being knocked outside. Lashley has to be held back and we take a break. Back with Lashley hitting a Downward Spiral for two on Riddle and handing it to Shelton for a half crab. Cedric’s reverse chinlock doesn’t last long as Riddle comes back with a kick to the head. Kofi comes in off the hot tag to clean house, including the Boom Drop to Alexander.

Woods makes a blind tag and Kofi dives onto Shelton. Everything breaks down again with Woods taking out Cedric and MVP at the same time. Jeff dives off the top onto MVP and Woods nails Alexander with the discus lariat (Tom: “A big Harper clothesline!”) and Hardy adds the Swanton. Lashley makes the save and Shelton knees Riddle off the apron. The Twist hits Shelton and Lashley comes back in, only to have Hardy block the spear. That’s fine with Lashley, as it’s the Hurt Lock to finish Hardy at 14:27.

Post match the brawl stays on with Riddle hitting the Final Flash to Lashley so the team can escape.

John Morrison tries to perk Miz up but saying John Cena lost to Kevin Federline doesn’t help. Adam Pearce comes up with the Money in the Bank briefcase…..because he’s here to return it to Miz. It turns out that Miz is right so he’s Mr. Money in the Bank again. Celebrating ensues.

Here is Alexa Bliss so Randy Orton can answer her challenge. Orton asks where Fiend is but Bliss says this is about her. She goes outside to find a present, which contains gasoline. Bliss challenges Orton to do to her what he did to him but Orton doesn’t move. Bliss pours the gasoline on herself and says light the match.

Orton still won’t move so she calls him a little b**** and pours the rest of the gas on herself. Orton: “You think I won’t do it?” He talks about how much he loves to hurt people so if Bliss wants to join the Fiend in h***, he’ll make her join him. There go the lights so Orton lights the match….and that’s it. 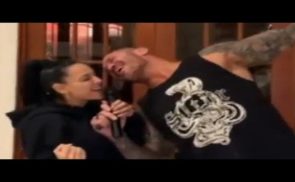