We’re less than two weeks away from Tables, Ladders and Chairs and you can probably piece together a lot of the card from here. That being said, there is a lot that still needs to be done so expect tonight to be thrown into overdrive in a hurry. It is hard to say how well that could go for the show, but I’m guessing it’s going to feel long. Let’s get to it.

The AOP arrives in the back and speak Punjabi/Albanian. The translation: Charly Caruso looks lovely tonight. Charly: “What?”

Here’s Seth Rollins to apologize for last week. Rollins talks about how everyone in the back is his family and as the head of the family, it is his job to get the best out of everyone here on Raw. Maybe he went a bit too far with that last week though and he needs to apologize. Lawler does not approve of this and it’s even worse when Rollins asks Owens to come out here and accept his apology man to man.

Owens comes out and says he thinks the only family Rollins has is the AOP. Rollins denies it, but Owens calls (uncensored) BS. Cue the AOP to make the offer of a tag match. Rollins says he’s in but Owens says he sees three scenarios, all of which end in him getting beaten down three on one. Therefore, let’s get it over with now. Rollins walks out and the AOP lets him go, but Owens offers to fight them one at a time. For some reason the AOP leaves so Owens issues an open challenge.

Cue Lana to handle Bobby Lashley’s introductions and shows off her rather revealing outfit as Owens facepalms in the ring. Owens: “NO ONE CARES! I DON’T CARE IF YOU’RE NOT DONE TALKING! I AM VOMITING IN MY MOUTH RIGHT NOW!” Lana isn’t done and makes it clear that Rusev isn’t here tonight because the restraining order is on again. Owens says she is repulsive on the inside so Lana calls him a “basic pizza eater”. She threatens to have Lashley come out here and finish him. Owens: “LET’S GET TO IT!!!”

There is security on the floor waiting for Rusev. Lashley knocks him to the floor to start but Owens gets in a shot of his own, setting up the frog splash off the apron. Back from a break with Lashley hammering away until a superkick gets Owens out of trouble. The spinning Big Ending gives Lashley two but the full nelson is blocked. Owens hits the Pop Up Powerbomb but here’s the TOP to beat up Owens for the DQ at 8:49.

Post match AOP beats Owens down and drags him off.

Post break Lana and Lashley talk about how tired they are of dealing with Rusev, which has caused Lana to have to hire security. Cue Rusev through the crowd to superkick Lashley and beat him down as Lana screams for the guards to come in. They take their sweet time getting up onto the apron as Rusev bails. They never even got in the ring so Lashley goes outside to yell at them, but since they’re detectives, Lashley gets arrested for getting physical. Lana slaps one of them and is going to jail too.

Post break we see exactly what happened before the break.

Lana and Lashley are put in the car and taken away.

McIntyre drops to his knees to make it even and offers Tozawa a chance to leave. That earns him a running dropkick and Tozawa sends him to the floor for a suicide headbutt, which doesn’t even knock McIntyre off his feet. The reverse Alabama slam on the floor knocks Tozawa silly and we hit the reverse chinlock with a knee in the back. One heck of an overhead belly to belly drops Tozawa again and we hit the chinlock. Tozawa gets up and manages a kick to the head, followed by a missile dropkick to finally put McIntyre down. A victory roll gives Tozawa two but it’s the Claymore for the pin at 4:12.

Post match McIntyre calls out Randy Orton for taking some shots at him on social media. He wants Orton out here right now but after a break, there is no Orton. McIntyre calls Orton attacking him last week STUPID STUPID STUPID so here’s Orton to interrupt. Orton doesn’t seem to think much of this and tries to walk away, but McIntyre goes on another social media rant. He’s going to make this simple enough for Orton or the Nashville fans to understand.

McIntyre didn’t think much of the RKO last week and it won’t be happening again. Orton says he thinks of this as a Drew McIntyre attitude problem. He can do these things because he has earned it but McIntyre hasn’t earned a thing. Cue the OC to blame Orton for costing Uncle Alan the US Title.

No, AJ isn’t happy here and yes it’s Orton’s fault. AJ wants to get his hands on Orton tonight so McIntyre bails, leaving Orton alone against the three of them. They get up on the apron and the fight is on until Ricochet runs in for the save. He gets beaten down as well so it’s Humberto Carrillo making a failed save attempt of his own. Rey Mysterio makes the real save.

Post break, Orton tells the three of them thanks for the help, but he didn’t need it. Well at least they weren’t just waiting for the match to start when we got back.

Nese goes straight at Nese and grabs a headlock as Buddy Murphy is watching in the back. Black flips over him and sweeps the leg, setting up the moonsault into the sit in the middle. Back in and Nese takes the eyes to take over and snaps Black’s throat over the top. The springboard moonsault hits….something close to Black’s knees and it’s a jumping knee to the face. Black Mass (or Black Magic as Lawler puts it) finishes Nese at 3:27.

Murphy doesn’t regret going after Black and says Black takes himself way too seriously. Murphy is cool, calm and collected while Black is a hothead. Black needs to calm down and if he won’t, Murphy will do it for him.

Young works on a wristlock to start and knocks Andrade off the top for the big elbow and a near fall. Andrade pulls him off the middle rope though and hits a running kick to the head for two. The armbar goes on for a bit until Young fights up and gets in a shot to the face. The big elbow is broken up again though and the running knees in the corner rock Young. Andrade hits the hammerlock DDT for the pin at 4:36.

Post match R-Truth runs out with the Mob following, as Truth is hiding behind some NASCAR drivers. One of them (Michael Waltrip) is a referee and the other (Kyle Busch) rolls Truth up for the pin and the title.

The Street Profits shill stuff with the No Way Jose conga line.

We recap the AOP stuff throughout the night.

Rollins doesn’t like the suggestions that he did anything wrong. Everyone may be a critic, but not everyone has the guts to be a leader.

We look at Rey Mysterio winning the US Title last week.

Erick Rowan talks to whatever is in his cage.

No Way Jose vs. Erick Rowan

The conga line goes over to check out the sack so Rowan destroys them, as you might expect. Rowan beats up Jose for trying to make a save and hits the Iron Claw. A second one finishes Jose at 2:06.

Post break Rowan won’t say won’t in the cage and is annoyed at being asked about it.

The Kabuki Warriors rant in Japanese before their match. They promise to beat Charlotte tonight.

The Warriors now have their own single theme instead of the pretty bad mashup. They jump Charlotte before the bell and the beatdown is on, with the referee giving Charlotte a breather before starting it off. Sane chokes Charlotte in the corner but she fights back, only to get caught by Asuka to keep her in trouble.

Charlotte knocks both of them outside but gets rammed into the barricade to cut her off again. With Sane being sent into the barricade, Asuka kicks Charlotte down to put her right back down. The hip attack hits Sane though and Charlotte kicks Asuka in the face. Back from a break with Sane pounding away but getting kicked out of the air.

The moonsault hits double knees though as Charlotte can’t keep anything going. Sane gets caught in the Boston crab until Asuka kicks Charlotte in the head for the break. Asuka kicks away and grabs the armbreaker, which is reversed into the sitout powerbomb for two with Sane making the save.

Charlotte takes both of them to the top but a double superplex is broken up. Sane hits some top rope knees to the back to give Asuka two but Charlotte is right back with the double spear. The Figure Eight has Asuka in big trouble until the Insane Elbow (to Charlotte’s bridged ribs) breaks it up for the pin at 16:00.

Non-title and all the usual sets up the Viking Experience for the pin at 1:37.

Ricochet, Humberto Carrillo and Rey Mysterio are ready to shut the OC up tonight.

We look at Lashley and Lana getting arrested.

The OC are going to win tonight and then get Randy Orton.

Carrillo takes over on Anderson’s arm to start and it’s Ricochet coming in with an ax handle to stay on it. AJ comes in and gets taken down by Humberto’s springboard crossbody. They head outside with Carrillo being sent into the barricade and it’s Gallows coming in for an elbow to the back of the head. Joe drops a Red Neck Kung Fu reference as Gallows takes Carrillo down for elbows to the chest.

Carrillo flips over the back and scores with an enziguri. The hot tag brings in Mysterio to pick up the pace and it’s Anderson and Gallows being sent outside. The 619 to AJ is broken up by Anderson and we take a break. Back with Gallows suplexing Mysterio, which is a lot better than having Mysterio fighting out of another chinlock. Anderson comes in for the trash talk into the chinlock but Mysterio sends him into the corner for the break.

Ricochet gets the hot tag to pick up the pace, meaning it’s a bunch of kicks to a bunch of heads. The springboard clothesline into the standing shooting star press gets two on AJ. Styles is right back with the belly to back faceplant for his own two as everything breaks down. The 619 hits Anderson but Gallows superkicks Mysterio down. Ricochet counters the Styles Clash with a hurricanrana for two so Ricochet loads up a super hurricanrana. AJ isn’t about to let that happen though and it’s reversed into a super Styles Clash for the pin at 14:38.

Post match AJ poses and gets caught with the RKO to end the show. 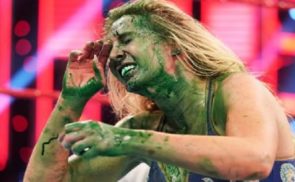