We’re coming up on Money in the Bank, meaning it is time for wrestlers to start building momentum by getting pins or submissions to build to a match that has nothing to do with pins or submissions. If nothing else, there’s a heck of a drinking game to be played regarding how many times commentary references climbing the corporate ladder. Let’s get to it.

We open with MVP’s VIP Lounge. MVP talks about how awesome Money in the Bank is going to be and brings out Rey Mysterio, Aleister Black (MVP: “Please don’t break anything.”) and Apollo Crews. Rey is asked what it means to be Mr. Money in the Bank but MVP won’t let him answer, saying that it’s just another great moment on an already legendary career. Black probably wants to be moved up to stardom. Crews actually gets to speak….for a few words as Zelina Vega and company cut him off.

Zelina laughs at the idea of any of the three of them winning Money in the Bank. The WWE Universe can’t get enough of the three of her people because they are the future. The three people in the ring were the future at one point but they would mean Mr. Money in the Bank is on Smackdown. What needs to happen is her three replacing these three, but Rey isn’t buying that. The brawl is on and Zelina’s guys are sent outside in a hurry.

Black and Garza grapple on the mat to start with Black slipping away and grabbing an armbar. It’s off to Crews to armdrag Theory into another armbar, followed by Rey sending Theory into the corner. Andrade has to break up a double 619 to Garza and Theory so Rey sends him into the ropes for the 619 instead.

That doesn’t work either so Black and Crews hit big running flip dives over the top as we take a break. Back with Theory working on a reverse chinlock on Black and it’s Andrade coming in for some kicks tot he ribs. Theory is back with the front facelock and a torture rack to send Black into the corner. Black comes out with kicks to the face and a rolling victory roll for two but there’s no hot tag yet.

Another kick to the face rocks Theory though and it’s off to Rey to clean house. Garza tries to throw Rey at Andrade but it’s a hurricanrana to take Andrade down instead. A gutbuster drops Rey though and GARZA TAKES OFF HIS PANTS! Back from another break with Mysterio still in trouble in the corner, including a gorilla press drop from Theory.

Mysterio tornado DDTs his way to freedom and Crews gets the second hot tag to pick up the pace again. Crews powerslams Theory but Theory slams him down for two. The ATL is broken up and it’s Black coming back in to set up the parade of everyone knocking each other down. Andrade’s spinning back elbow gets two on Crews, but the toss powerbomb finishes Andrade at 24:26.

Tonight it’s the Top Ten Moments of HHH’s Career! We’ll start with HHH taking over the leadership of DX the night after Wrestlemania XIV.

Andrade is mad about the loss and blames his partners. Crews can’t beat him one on one. Andrade and Zelina leave when Crews comes in to say he can beat Andrade again, even if the second match is tonight. Andrade comes in and says bring it on. That means a HARD slap and the title match is set for tonight.

8. Beating the Rock in the first Smackdown main event.

7. Stephanie walks in on HHH and Trish Stratus.

Before the match, Asuka yells about Nia injuring Kairi Sane and says that she tapped Nia out two years ago. Baszler pulls Asuka to the floor to start the beating in a hurry, including a whip into a barricade. Nia breaks that up and gets kicked in the head by both of them as we’re still waiting on the opening bell. Asuka sends Baszler into the steps but gets dropped HARD by Nia. Nia throws in a ladder and runs both of them over as the referee seems to have left rather than try to make this a match. Nia teases tossing a ladder onto the two of them but drops it down instead. No match.

Bobby Lashley asks Lana to stay in the back for the next match. She’s so beautiful and it’s a distraction you see.

Lashley takes him down without much effort to start and it’s a trip to the corner for some forearms to the chest. Denzel gets in a shot to the face so that’s an ax handle to the back. A release suplex drops Denzel again sets up the spear for the pin at 1:43.

Ruby trips her down to start but a headscissors out of the corner is reversed into a faceplant. The Riott Kick connects out of nowhere and Ruby is stunned by the kickout. Ruby stomps on her fingers and talks trash against the ropes but Liv is right back with the springboard Downward Spiral (Oblivion) for the pin at 2:55.

Post match Liv says she is still trying to figure out who she is but she’s confident she can work it out.

Nia Jax isn’t worried about people not liking her and threatens Charly Caruso a bit. No one can do anything about what she does, including Asuka and Shayna Baszler.

The Viking Raiders are ready for the Street Profits and the Tag Team Titles. The Profits have never beaten then and that isn’t changing at Money in the Bank. As long as they are around, the Profits will always be second best. Prove them wrong.

Mahal slams him down to start and takes Tozawa to the floor. Choking against the barricade and tosses into various things keep Tozawa down. Back in and a Samoa drop plants Tozawa and the Khallas gives Mahal the pin at 1:37.

Zelina isn’t happy with Charly for asking Andrade a question. Zelina and Andrade leave but here’s Garza to say he and Charly should get better acquainted. He even has a rose for her and the smile is on.

4. DX impersonates the McMahons. Some of these are a lot more questionable than others.

Crews is challenging and Vega is here with Andrade. Feeling out process to start with Andrade working on a wristlock. That’s reversed into an armbar as Vega isn’t looking pleased with the goings on. Crews’ front facelock doesn’t last long and it’s Andrade grabbing a headlock instead. They go to the floor for a bit, followed by Andrade taking him back inside to stomp away.

Some choking and a dropkick keep Crews in trouble but Andrade misses a running knee in the corner. That means a nasty crash to the floor but Andrade avoids a moonsault, causing Crews to tweak his knee as we take a break. Back with Andrade working on a half crab, only to miss the running knees in the corner. Crews hits an Angle Slam and they’re both down. An overhead belly to belly sends Andrade flying but he gets a boot up in the corner.

Crews is back with a press slam and the standing moonsault for two but Andrade is back with a whip into the corner. Now the running knees can connect for two as Vega is losing her mind. Crews blocks the spinning elbow but the gorilla press is countered into a DDT for two. The hammerlock DDT is countered into an enziguri and a powerslam gives Crews two of his own. Crews knocks Andrade off the top but misses a top rope splash and hurts the knee again. Andrade kicks him to the apron and the referee stops it at 16:45.

We look back at Crews vs. Andrade. More on this later.

The Street Profits don’t like what the Viking Raiders said. Last week the Profits were putting in work while the Raiders were doing Carpool Karaoke. It’s true though: the Profits have never beaten them. That can change next week.

We look at a clip of Becky Lynch’s 24 as she won the Raw Women’s Title last year at Wrestlemania. Everyone knows she is ready to be a star. Becky: “What do you do when all your dreams come true? Make up some new ones.”

Martel gets sent into Alexander’s knee to the ribs and it’s a running flip neckbreaker into a backbreaker for two. It’s off to Parker, who gets in an elbow to Ricochet’s back to take over. Ricochet fights out of a chinlock though and it’s off to Cedric to start cleaning house. Everything breaks down and Cedric hits a standing moonsault for two on Martel. Ricochet dropkicks Parker to the floor and it’s a top rope double stomp into a Downward Spiral to finish Parker at 4:08.

Post match MVP pops up on screen to introduce Brendan Vink and Shane Thorne. They want a rematch and MVP sees box office platinum. Cedric and Ricochet are fine with that.

Crews now has a wrap on his knee and is limping around on crutches. Charly comes up to say this probably hinders his progress. Crews starts crying and leaves without saying anything.

Another McIntyre vs. Rollins video.

1. The quad tear and return.

Next week: Street Profits vs. Viking Raiders for the Tag Team Titles.

Jerry Lawler is in the ring to talk about Money in the Bank, including the Raw World Title match. Seth Rollins and Drew McIntyre come out and McIntyre tells Lawler to leave for this. Lawler is out in a hurry and McIntyre signs without much thinking about it. Rollins doesn’t sign yet so McIntyre says time’s ticking.

That sends Rollins into a rant about how he doesn’t want to do this but has to. This is bigger than all of them and Drew will be a great champion one day. Rollins has to do this because he had to suffer for that title. He doesn’t want what happened to him to happen to Drew because it is his burden to carry. When that time comes, Rollins can lead Drew as well. Drew: “You’re full of s***.”

Drew tells him to stop talking forever because no one wants to hear Seth talk. Rollins says that the big picture will be clear at Money in the Bank and he signs. He goes to talk about having faith but Drew sends him face first into the table. The ring is cleared and a headbutt drops Seth so the Claymore is loaded up. Cue Murphy to kick McIntyre in the head, earning himself a hug from Rollins. McIntyre is back up and Claymores Murphy to end the show. 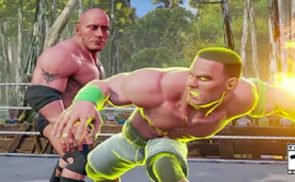