It’s a big night here as we have the return of John Cena since his injury late last year. At the same time though we’re probably going to hear the first news about the new Brand Split as Raw and Smackdown will become stand alone shows again starting in July. A lot of the details are still up in the air at this point but it should be interesting either way. Let’s get to it.

We open with a moment of silence for Memorial Day.

A bunch of wrestlers quote a Ronald Reagan speech on fallen troops.

Here’s Shane McMahon to open things up but Stephanie comes out to join him before anything can be said. They mention the Brand Split and Smackdown moving to Tuesdays before New Day comes out for a chat. Big E. likes the idea of bringing the power of positivity to Raw and Smackdown (“That’s a lot of P’s.”) but then it turned into paranoia because the rosters might be split up. After making fun of Kofi for being the oldest member of the team (Woods: “You were my favorite wrestler in middle school.”), they get to the point: which show will New Day be on?

Stephanie dodges the question and New Day does a dramatic reenactment of Stephanie dodging it like an invisible ball. Woods goes insane and nearly starts crying over the team being split up and Francesca II being in a broken home. There’s also no decision yet on who will be running which show so New Day thinks there should be a dance challenge. Stephanie isn’t interested but Shane gets into it to a nice reaction. They finally get Stephanie to join in but the Vaudevillains cut her off.

Non-title and joined in progress with Cole welcoming us back to Smackdown. English gets stomped down in the corner as JBL tells us that a herd of unicorns is called a glory. We get the Unicorn Stampede but Gotch pulls Kofi’s foot to give the villains control. Gotch headlocks Kofi and knocks him to the floor as we take a break after less than four minutes of action. Back with Kofi taking Gotch down and making the hot tag to Big E. for the overhead belly to belly suplexes on English. As this is going on though, Karl Anderson and Luke Gallows run in to attack Kofi for the DQ at 8:54.

Anderson and Gallows lay out the champions post match.

Post break Anderson and Gallows say they’ve just put the tag team division on notice because they can do just as much damage without AJ.

We look back at Sheamus attacking Apollo Crews last week.

Crews is doing pushups when Big Show returns to say hello. Apollo says he’s ready to fight Sheamus and Show can admire that. Show knows Crews will make it work because Sheamus is scared of the New Era.

Golden Truth is on commentary with JBL ripping on them for being a horrible team. Truth: “JBL they do not allow elephants in here.” Fandango hammers on Jey to start but Breeze charges into a superkick on the floor. Back inside, Jey crucifixes Fandango for the pin at 1:48.

Here’s Roman Reigns for a chat. Reigns talks about how the Shield broke up a long time ago and until someone takes this title from his shoulder, he’s still The Guy. This brings out Rollins for a fight but he doesn’t get in the ring. Instead he grabs the mic and teases talking but throws the mic down and goes towards the ring instead. This happens five or six times before Rollins just leaves. Rollins sprints down the ramp one more time but stops at the apron again to wrap this up.

Non-title. Rusev knees him in the ribs to start and drops Ryder with a clothesline. Ryder gets the knees up in the corner and drops Rusev with a middle rope dropkick. The Broski Boot connects for two but the Rough Ryder is easily countered and the Accolade makes Ryder tap at 2:31. That’s the sixth time Rusev has made Ryder tap on Raw in just over two years and actually the longest Zack has ever lasted.

Rusev calls himself a real American hero but here’s Titus O’Neil to interrupt. Titus says this is Memorial Day and drops Rusev to the floor with a single right hand.

The Shining Stars want us to come to Puerto Rico.

We get a video on Charlotte dropping Ric Flair with comments from various people. This aired on Smackdown.

Earlier today, Stephanie yelled at Charlotte for being a spoiled, selfish brat.

Before the match, Cass lists off various types of cheese that he’s putting on the knuckle sandwiches he’s about to hand off. Bubba and Cass lock up to start but both Dudleyz are quickly sent to the floor as we take an early break. Back with Enzo in trouble and eating an elbow to the jaw for daring to fight out of a neck crank.

Bubba comes in and drops some elbows for two before ripping at Enzo’s face. We hit the chinlock from D-Von for a bit before the hot tag brings in Cass. The reverse 3D gets two on him though and Bubba goes up, only to have an Enzo distraction let Cass slam him down. D-Von takes the big boot and the Rocket Launcher gives Enzo the pin at 9:23.

Sami Zayn, Dean Ambrose and Cesaro discuss their match against Chris Jericho, Kevin Owens and Alberto Del Rio. They’re keeping an eye on their opponents but Dean doesn’t seem to think much of Canadians. Sami: “You know I’m Canadian right?” Dean: “….Oh. That explains so much.”

It’s the top of the third hour and here’s the returning John Cena. He looks at the mic and gives a speech about Memorial Day and is very glad that he’s back home. However, he wants to thank everyone who has paid the ultimate price to keep our liberty safe. As for the business at hand tonight, the question is whether or not Cena still belongs here. That starts up a YES chant in quite the little surprise.

It’s a New Era around here with a bunch of new names and new faces and all of them are thinking that Cena’s best days are behind them. The name of this new era doesn’t matter because Cena isn’t going quietly into the night and the face that runs the place is back so the future must go through him.

Cue AJ Styles for something that would have been a dream match ten years ago. The fans are split (JBL: “The WWE Universe is having fun right now!”) until AJ says he’s been waiting for this for a long time. He’s always heard about Cena being the first in and the last out and now AJ wants to be the first man to welcome him back.

Cue Anderson and Gallows to as they’re here for a fight. That sounds like a challenge but AJ blasts Cena in the face and the Club is back together. The big beatdown is on and AJ even goes back in three more times to keep beating on him. Even Anderson and Gallows pull him back.

Charlotte is at ringside as this feud is somehow continuing. Natalya hits her in the corner but gets taken down, allowing Charlotte to yell a lot. Charlotte distracts her to break up the Sharpshooter and the Samoan Driver gives Dana the pin at 1:20.

Post match Becky Lynch runs in for the save.

Dolph Ziggler is ready to show off tonight against Baron Corbin in a technical wrestling match. Dean Malenko was the Man of 1000 Holds and on the WWE Network you can see Chris Jericho list off his 1004 holds. Well Ziggler knows 1005, which he starts to list. As expected, every other one is armbar.

This is billed as a technical wrestling exhibition and Dolph puts on headgear. And there’s a low blow to Baron for the DQ at 33 seconds.

The fans aren’t sure how to react to this so Dolph says the loser of this match is still Baron Corbin.

Miz is on the set of his new movie and needs to get some rest before shooting starts.

Owens, Jericho and Del Rio bicker about the six man tag. They agree to work together but Jericho calls them both idiots after they leave.

Del Rio suplexes Cesaro to start but Cesaro runs to the floor for the running uppercut on Jericho. The Swing is blocked by a rope grab and Cesaro is taken outside for a triple team. Jericho stomps away as the fans chant STUPID IDIOT. Cesaro suplexes his way out and the hot tag brings in Sami to clean house with his clotheslines. The villains get in a fight on the floor and Sami scores with a big dive as we take a break.

Back with Owens dropping Sami ribs first over the top rope and getting two off the backsplash. Del Rio grabs the leg to stop a tag and it’s back to Jericho who misses a Lionsault and bangs up his own knee. The Blue Thunder Bomb finally allows the hot tag off to Ambrose as house is cleaned again.

Jericho dives into a kick to the ribs but still blocks Dirty Deeds. Instead Dean hits the suicide dive to take Chris out, only to have Jericho grab a Codebreaker back inside. Owens wants the pin but only gets two. The Canadians start arguing so Cesaro knocks them together and Swings Jericho. Everyone comes in and Owens tries the Pop Up Powerbomb on Zayn, only to get caught in Dirty Deeds for the pin at 17:56. 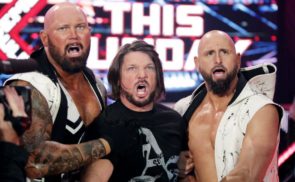