It’s the go home show for Extreme Rules 2016 and the only match announced for tonight is the Usos vs. Karl Anderson/Luke Gallows. For those of you not counting, this is the seventh time these teams have been in a match together since April 25, or once for ever Raw/Smackdown in that span. Let’s get to it.

Here’s AJ Styles to open things up. AJ is tired of Roman Reigns lying about him and he shows us tweets to prove that Reigns is saying AJ is in league with Anderson and Gallows. Apparently this is getting to him because it’s a new era and he’s tired of the same old stuff. He didn’t need anyone’s help to get to the top spot in the Tokyo Dome in front of 60,000 people and he doesn’t need anyone’s help to get where he’ll be on Sunday. Cue Reigns to interrupt to say AJ is indeed phenomenal.

Reigns gets annoyed with a WE WANT ROLLINS chant and says he’ll be in the Usos’ corner tonight. AJ will be in his buddies’ corner and cuts Roman’s “the guy” speech off. Reigns is indeed the guy…..that AJ is going to beat on Sunday. Roman shrugs it off and says he can do everything he wants to on Sunday. That’s going to prove that the bloodline (might be the new name for Reigns and the Usos) is stronger than the Club. Cue Gallows and Anderson but the Usos run in as well, only to have Reigns blast AJ in the face to send the Club away.

Miz and Owens are on commentary. This is the aftermath of Zayn accidentally kicking Cesaro, his partner at the time, in the face on Smackdown to cost them a match. Cesaro starts fast and powerslams Sami for two but gets sent to the floor, allowing Sami to tease the dive. Instead it’s the springboard moonsault back inside as Owens walks off commentary because he “doesn’t care about this match”. Instead Owens goes after Miz and walks off with the Intercontinental Title. Miz goes after Owens to start a brawl and they get inside to draw the no contest at 1:47.

Result: Cesaro vs. Sami Zayn went to a no contest when Miz and Kevin Owens interfered (1:47)

Cue Shane to make it a tag match but Stephanie comes out to say it would be more interesting if the teams were Miz/Cesaro vs. Sami/Owens and if Owens walks out, he’s not in the title match on Sunday.

Joined in progress with Cesaro escaping Kevin’s headlock and trying the Swing. Owens slaps Sami to bring him in to face Miz but Sami and Owens keep yelling at each other. One such argument results in Sami being knocked off the apron and into the barricade, which seems to bang up his shoulder as we take a break. Back with Miz hitting the running corner clothesline on Sami and bringing in Cesaro to pick the bones with a running clothesline of his own.

Miz comes back in and punches Sami into the corner for the tag off to Owens for the big face comeback. Cesaro comes in for the running uppercuts as everything breaks down. Miz sends Cesaro out to the floor to try his own Swing, only to have Cesaro give Miz the Skull Crushing Finale. The Helluva Kick puts Miz away at 10:47.

Owens lays Sami out post match and insists that his hand be raised because he won too.

Chris Jericho is furious at Dean for destroying a jacket more iconic to the WWE than Andre the Giant. He should call the cops but he’ll deal with this himself.

The jobbers are Corey Hollis/John Skyler from NXT. The Shining Stars are Primo/Epico as wrestling travelogues from Puerto Rico. JBL: “THEY’RE FINALLY HERE!” Primo says the ring is their paradise and they welcome tourists like these people from right here in North Carolina. Primo grabs Jackson to start before it’s off to Epico for two suplexes into a brainbuster. A hard shot to the face drops Kennedy and a butterfly suplex into a gutbuster makes things even worse. The Shining Star (Total Elimination) puts Kennedy away at 1:35.

The Shining Stars invite us to Puerto Rico.

Here’s Dean Ambrose, sporting a black eye, to call out Jericho. Chris is right there to tell Dean to shut his mouth. Jericho demands an apology to go with fifteen grand but first Chris has to tell the fans to be quiet. The apology isn’t happening because Dean wants a match at Extreme Rules. Jericho: “Just as I expected.” The match is on but Dean doesn’t know if Jericho is up to getting extreme anymore.

Jericho lists off his resume and accepts, so Dean has a cage lowered. There are weapons attached to the cage (including a mop and a potted plant), which Dean has dubbed the Asylum. Dean gives a long speech about how violent this is going to be while the announcers act like there has never been a match like this before.

We recap the opening sequence.

Dana Brooke insults some people for not being in good enough shape.

No Emma here as she’s legitimately injured, which the announcers actually acknowledge. Becky kicks her out to the floor but Dana sends her head first into the barricade. A modified seated abdominal stretch has Becky in trouble but she comes back with the Bexploder. Dana counters a sunset flip out of the corner and sits down for the pin at 3:45.

We get the same Life Lesson with Bob Backlund from Smackdown with Backlund not understanding smartphones and telling Darren to put his desktop on the desk and his mail in the mailbox.

Shane and Stephanie are watching the Backlund ad when Stephanie gets annoyed at him for not bringing up the Asylum match. The Dudley Boyz come in to mention the Attitude Era, which gets one of them a match with Colin Cassady.

Video on Golden Truth FINALLY getting together after five months, capped off by this past Thursday when Fandango and Tyler Breeze turned on them.

Truth goes after Breeze to start but gets knocked down in the corner, allowing Fandango to come in and smash him in the face. A double clothesline puts both guys down so it’s off to Goldust vs. Breeze. Goldust starts cleaning house and everything breaks down, only to have Truth kick Goldust by mistake, allowing Breeze to get the pin at 1:58.

Post break Goldust doesn’t think the team has any future. Truth thinks they need to get the creative juices flowing and that they need to get their “fing shooie” in line. Everyone wants the Golden Truth but here are Breeze and Fandango to say the new era is passing them by. That’s enough to convince Goldust to stick with it.

Here’s New Day for a chat and there’s something under a curtain behind them. They’re not sure what’s up with the Vaudevillains being from a new era…..so Woods has built a time machine. Big E: “That’s clearly an old refrigerator box.” Woods: “IT’S THE NEW DAYLOREAN!” Big E. thinks the keyboard is from Woods’ parents house. Big E.: “WHY IS IT STICKY???”

They get inside and Kofi comes out to his SOS theme with a Jamaican accent. Woods pulls him back in, despite Kofi’s protests that it was his best year. They come back out (after a lot of whirring noises and the camera going wonky) in black and white with a box of Derriere Squares and broken smart phones. Woods realizes this means there are no video games so Big E. shouts that they shouldn’t be here. Cue the Vaudevillains to beat them down.

Reigns and AJ are at ringside. No Siva Tao for the Usos in a rare change. Jimmy superkicks Anderson to start and Gallows is knocked to the floor as well, giving us a meeting on the floor but not a break. Anderson takes over on Jimmy back inside, setting up a legdrop and chinlock for two. Something resembling a Whisper in the Wind puts Gallows down on the floor and Jimmy dives off the steps to drop him again. Anderson decks Jimmy and we get a lot of shouting to take us to a break.

Back with Luke crotching himself on the top rope and Anderson getting backdropped to the floor. Jey gets the tag and dives onto both of them, followed by the running Umaga Attack for two. Anderson breaks up a superplex attempt but charges into a spinebuster for two. Karl tries to run the ropes but eats a superkick with Gallows making the save. Gallows eats another superkick, followed by back to back double superkicks. The Superfly Splash ends Gallows at 12:48.

Post match the brawl keeps going with the tag teams being sent out to the floor. AJ picks up the chair but Reigns punches it out of his hands. Gallows and Anderson interfere but Roman drops them, allowing AJ to beat on Reigns with the chair, including a Styles Clash onto the chair.

Before the match, Cass implies that D-Von is Steve Urkel. Bubba loads up an early table but gets on the apron for some near heel miscommunication. The East River Crossing puts D-Von away at 58 seconds.

Non-title and Kalisto slips on the way to the ring. Del Rio goes after the mask to start before sending Kalisto outside. Kalisto comes back and tries a hurricanrana off the apron, only to get caught and swung into the barricade as we take a break. Back with Kalisto taking a tilt-a-whirl backbreaker so Del Rio can show off the biceps. We see Sin Cara watching in the back as Rusev blasts him in the back with a stick.

Del Rio forces Kalisto to watch the beating on the screen before going HARD into the post off a missed charge. Alberto takes way too long for the top rope double stomp though and Kalisto comes back with a top rope hurricanrana. Cue Rusev kicking Cara down the aisle as Kalisto springboards into a seated senton. The hurricanrana driver gets two but the Rusev distraction lets Del Rio get in a Backstabber for the pin at 11:12.

Rusev kicks Kalisto in the back of the head and gives him a PAINFUL look Accolade post match.

Here are Shane and Stephanie to moderate the Women’s Title contract signing in the closing segment. They introduce Charlotte but Ric Flair comes out for the big hyped up introduction. Charlotte thanks her dad for the speech and wants to sign but Shane brings out Natalya. Getting her history wrong, Natalya says Charlotte beat her before without Ric in her corner (Ric and Bret were at ringside for that match).

Charlotte goes on a rant about how this is her city and how everyone loves her because her last name is Flair. Ric starts WOOing but Charlotte actually cuts her off. The champ goes to sign the contract but there’s a clause saying that Charlotte forfeits the title if Ric takes one step down the aisle.

Cue security to drag Ric away and if he doesn’t leave, the title is forfeited right now. Ric yells at Stephanie and calls her the worst businesswoman of all time. It’s time to fight Shane and the fans go nuts, only to have Stephanie slap Ric instead. Now security takes him out but Natalya has to save Stephanie from Charlotte. The champ is put in the Sharpshooter and taps out to end the show. 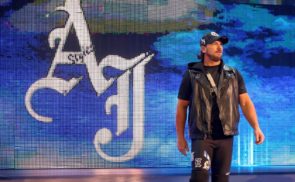 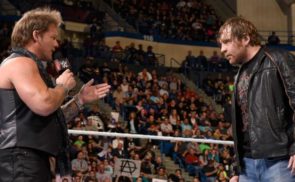