As you might have heard before, tonight is all about Roman Reigns, who is going to be announcing what he wants to do at August’s Summerslam. While this is likely wanting a World Title shot, I’d be stunned if it didn’t actually end with Braun Strowman interrupting and getting the match with Reigns at Great Balls of Fire instead. Let’s get to it.

Here’s Roman Reigns to open things up. Roman says the fans won’t like to hear this, but he can’t be beaten one on one. Ask Bray Wyatt, Finn Balor, Seth Rollins and Braun Strowman. Oh and remember he main evented his third Wrestlemania in a row, where he retired the Undertaker. Reigns doesn’t care who he faces but he’s getting the Universal Title shot at Summerslam.

This brings out Samoa Joe to say he didn’t hear his name mentioned on that list of people Reigns has beaten. Joe introduces himself but Reigns says he agrees with Paul Heyman: Joe will never be Samoa Joe, but rather just Joe. The fight is on with Joe being Superman Punched to the floor.

Hardys vs. Anderson and Gallows

The brothers take turns on Gallows’ arm and Poetry in Motion gets two. Jeff gets sent hard into the corner though and we take an early break. Back with Jeff getting kicked in the face and armbarred. Jeff kicks Anderson away but Gallows is right there to break up the hot tag attempt.

The hog tag works a few seconds later and it’s Matt coming in to clean house. Everything breaks down with Anderson rolling Matt up for two. A right hand to Matt’s jaw sets up the Boot of Doom for a close two, leaving Jeff to dropkick Anderson. The Twist of Fate into the Swanton gives Jeff the pin at 10:31.

Result: Hardys b. Anderson and Gallows – Swanton Bomb to Gallows (10:31)

Goldust challenges R-Truth for next week.

Here’s Elias Samson to tune his guitar but it’s Finn Balor making a quick interruption for his match.

Dallas jumps him before the bell and chokes away on the ropes, followed by a running knee to the head for two. Balor comes back with the Pele and a series of strikes, including the kick from the apron. Dallas is sent hard into the barricade a few times and it’s the Sling Blade into the Coup de Grace for the pin at 3:40.

Corey Graves has to run off and deal with something.

Video on Seth Rollins being the cover star for WWE2K18.

The announcers discuss Carmella winning the Money in the Bank briefcase with help from James Ellsworth.

Corey comes in to see Kurt Angle and says he knows he had a bad Father’s Day. Angle looks taken aback but Graves says he got the same message. Enzo and Big Cass come in with Angle wanting to know why Enzo tweeted something to Conor McGregor. That goes nowhere so they talk about who has been attacking Enzo and Cass. It might have been Revival, Enzo himself or Big Show. Angle promises to find out who did it tonight.

Here’s Seth Rollins to talk about being on the cover of the game. He brings up his heel turn from a few years back and everything it brought him. The problem was he couldn’t look in the mirror. Now he’s on the cover of the game and it’s his second chance. This cover belongs to both himself and the fans because it’s THEIR cover.

Cue Bray Wyatt to talk about how he feels the struggle in Seth’s soul. Seth is still conforming to whatever the people want and he’s just not that man. Rollins says he’s THE man and lists off some accomplishments. Bray says he’s here and blows out the lantern before coming out to the ring. Seth is smart enough to dive on Bray as he walks very slowly to the ring.

Graves praises Angle’s job as GM and stands by him during his personal issues.

Balor wants the Universal Title back and thinks Roman is tough enough to take down Joe tonight. Samson jumps Balor from behind and tells him to never upstage him again. D-Von Dudley (an agent if that wasn’t clear) chases Samson off.

Rematch from 205 Live. Hang on a second as Titus O’Neil comes out to say we need to really hype the match up, meaning he’ll handle the introductions. TJP flips over Tozawa to start but gets rolled up for two. A top rope dive misses Tozawa again but the backsplash hits knees. Cue Neville to say neither of these two are the next Cruiserweight Champion as we take a break.

Back with TJP keeping Tozawa on the mat, followed by the springboard forearm into the nipup. We hit an arm trap chinlock before Tozawa sends him to the floor for a suicide dive. Back in and TJP grabs a double chickenwing gutbuster but gets kicked in the face, setting up the top backsplash for the pin at 10:39.

Post match Titus talks about how awesome his Brand is and how Tozawa will be the next Cruiserweight Champion. Neville is tired of hearing about it so Tozawa needs to tread lightly.

Curtis Axel tries to cheer Bo up when Miz comes in to talk about how bad they’ve been lately. They were in the Marine 5 together and Miz made them stars. He can do it again here on Raw.

Samoa Joe thinks Reigns needs to learn his name because Joe beat him in his Raw debut.

They trade shoulders to start with no one going anywhere. Joe gets punched to the floor through and stays outside for a breather. Back in and Joe knocks him to the floor for a change, followed by a few headbutts with shouts of WHAT’S MY NAME. They head outside yet again with Reigns being sent into the post and barricade as we go to a break.

Back with Joe dropping an elbow and grabbing a chinlock. A backsplash hits knees though and Reigns makes his comeback with the ten clotheslines in the corner. The Superman Punch is countered into an atomic drop into the boot, followed by a backsplash for two. Joe gets back up and eats a Superman Punch for two more but still manages to block the spear.

There’s the Rock Bottom for another near fall so Joe is tired of the messing around. The Koquina Clutch has Reigns in trouble but he backs into the corner and hits the spear to send Joe outside. Roman loads up another spear but he’s an ambulance backing into the building. Naturally Braun Strowman is inside for one heck of a face pop and the distraction lets Joe grab the Koquina Clutch for the tap at 18:37.

Post match Strowman comes out and gives Reigns a reverse chokeslam. Fans: “ONE MORE TIME!” Strowman challenges Reigns to an ambulance match at Great Balls of Fire pay per view.

It’s time for MizTV with Miz apologizing to Maryse. He has two bears and a big present for her, plus champagne. Maryse comes out with Miz guaranteeing her that he’s checked the bears out and they’re fine. The present is the restored grandfather clock, which he repaired in their garage when she made him sleep on the couch. Maryse seems to forgive him when Dean Ambrose comes out.

Miz hides behind her, sending the champagne onto Maryse’s face. Dean keeps going by sending Miz into the clock to break it again. That’s enough for Maryse who slaps Miz and storms off, only to have the bears attack Ambrose. Naturally they’re Dallas and Axel and the beatdown is on with Miz helping out via a Skull Crushing Finale.

Non-title. Crews dropkicks Cesaro down to start but eats a right hand for his efforts. Apollo takes a bit of a beating in the corner until an enziguri drops Cesaro. Titus comes in and clotheslines Sheamus in the corner, followed by Apollo’s standing moonsault for two. A cheap shot sets up the assisted White Noise to put Crews away at 4:11.

Long video on Samoa Joe vs. Brock Lesnar with both guys talking about the amount of violence we’ll be seeing at the pay per view.

Alexa Bliss comes out for commentary and we’re joined in progress with Banks hitting the knees to the back. Cue Emma to yell at Bliss and then chase her into the ring. Bliss hides behind Jax so Emma kicks her in the ribs for the DQ at 1:11.

It’s a big brawl with Mickie James and Dana Brooke coming in as well. Bayley finally comes in and really cleans house, including a middle rope bulldog to Jax. The good women, as in Bayley/Banks/Brooke/James in this case, stand tall.

Here’s Angle to announce the attacker. He brings out Enzo, Cass, Revival and Big Show to really set the stage. Angle starts with Big Show, who says he’d fight someone face to face. If Angle thinks he did it, maybe he doesn’t need to be on Raw anymore. Show leaves and Cass is very happy until Kurt cuts him off to talk about Revival. Angle says it wasn’t them because enough referees and agents saw the two of them elsewhere.

Corey Graves says he has some information though. A few moments ago Cass said he had a golf ball sized lump on the back of his head, but the medical team said they never treated him. Cass starts backtracking but Graves has security footage. We see Cass staging the scene of the crime and laying on the ground like he’s unconscious. Cass admits he did it and yells about how tired he is of Enzo running his mouth about whatever he’s always talking about. No one behind the curtain likes Enzo and Cass felt bad for him.

Cass finally snapped and it felt good to lay Enzo out from behind. He unloads on Enzo for all the years of having to put up with him and wanted to see how smart Enzo really was. It turns out that Enzo is even dumber than he looks and nothing but dead weight holding Cass down. All Enzo does is have his mouth write checks that he can’t cash but now Cass isn’t behind him anymore. Enzo gets kicked in the head to end the show. 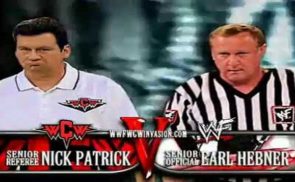 Watch: When Referees Fight Back 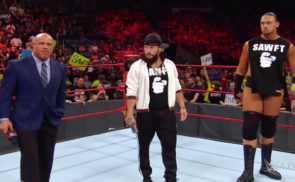