It’s the first Raw of the year and we’re starting with a bang. Tonight we’re seeing the rematch between Roman Reigns and Sheamus for Roman’s WWE World Title with Vince McMahon as the guest referee. It’s also time to keep going towards the Royal Rumble as we’ve got less than three weeks to go. Let’s get to it.

We open with another recap of Reigns vs. Vince to set up tonight’s title defense.

Here’s Stephanie to get things going but Roman Reigns cuts her off on the way to the ring. Reigns laughs off Stephanie’s annoyance and calls Vince out. Vince isn’t here yet and Stephanie laugh because this isn’t Roman’s night. Roman says that title is his life and his family because without it he can’t provide for his wife and daughter.

This amuses Stephanie even more as she rips on the fans for having so much false hope, just like Reigns. Stephanie says you can’t keep a good billionaire down and promises to destroy Roman tonight. After he loses the title, she’s going to work him all around the country until he drops. Then the fans are going to forget about him and move on, just like they did with Roman’s father Sika. Roman threatens to send Vince to the hospital and Stephanie finally shuts up.

We look back at Kevin Owens’ path of rage from last week.

Brock Lesnar is back next week.

Ambrose is on commentary. Neville has taped up ribs and quickly sends Kevin outside for a flip dive. Owens gets knocked across the ring and out to the floor on the outside, setting up a shooting star from the top. Back in and Owens gets smart by kicking Neville in the ribs and plants him with a hanging DDT out of the corner. Neville gets dumped out to the floor and we take a break.

Back with Neville still on the floor and missing his rib tape. He dives back in to beat the count at nine but Owens sends him back outside and hard into the barricade. Neville kicks him in the face to get a breather and drops a 450 off the apron. They head back in with Neville going up top, only to get crotched down for a Cannonball. The Pop Up Powerbomb ends Neville at 9:45.

Post match Owens goes after Neville again but Ambrose dives on him to make the save. Owens loads up the announcers’ table again but Dean takes over and drives him through the table with an elbow drop. Dean tells Owens that all he has to do is ask for a shot.

Vince arrives and finds it ironic that last week he was on the wrong side of the law but tonight he is the law.

Titus chops him hard in the corner to start until the Disaster kick puts him down. Stardust slowly stomps away in the corner as well and we hit the chinlock. The fans start chanting CODY to freak Stardust out, allowing Titus to come back with a big clothesline. A big boot in the corner and the Clash of the Titus puts Stardust away at 4:26.

Becky Lynch is getting ready when Charlotte comes up. Apparently Charlotte isn’t happy that they’re having a match tonight but they pinky shake anyway. Ric Flair comes in and WOO’s.

Non-title. Becky gets sent into the corner to start but grabs some armdrags to frustrate Charlotte. They hit the ropes with Becky nipping up and Charlotte cartwheeling into a standoff. Charlotte flips over in the corner but dives through the ropes into a rollup for two. Becky throws her down again but helps Charlotte up, only to take a HARD chop. Charlotte drops some knees until we take a break.

Back with Charlotte doing her figure four neck flips. Becky dives out of the corner but gets caught in midair, only to spin around into a sleeper. That earns her a backwards drop onto the mat for the break but Becky makes her comeback with clotheslines and a leg lariat. There’s a t-bone suplex for two on the champ but Ric grabs Becky’s leg. It doesn’t work this time as Becky rolls her up and grabs the trunks for the pin at 8:50.

Result: Becky Lynch b. Charlotte – Rollup with a handful of trunks (8:50)

Sheamus comes in to see Vince, who implies he’ll call it down the line. May the luck of the Irish be with you.

Ryback is officially in the Rumble. Show chops him into the corner to start but misses a charge, allowing Ryback to hit a quick clothesline. Ryback calls to finish it thirty seconds in, only to walk into a chokeslam. Show throws Ryback over the top….and we’ve got Wyatts. They surround Ryback so he goes after Harper, only to get quadruple teamed. We’ll say the match was thrown out at about 1:15.

Result: Ryback b. Big Show via DQ when the Wyatt Family interfered (1:15)

Strowman chokes Ryback out as Big Show just watches. Now the Wyatts circle the ring and go after the giant. Show knocks Bray, Harper and Rowan down but spends too much time staring at Strowman, allowing the swarm to take him down. Bray says they are the four horsemen of the apocalypse and everyone will fall. The other three do an upside down Horsemen gesture.

Jimmy and Del Rio get things going with Alberto eating an early clothesline. Rusev gets double clotheslined but the heels take over on Jey with Rusev driving him into the corner. A wicked overhead belly to belly sends Jey flying and we take a break.

Back with Jey trying a comeback on Rusev but missing an enziguri. Del Rio kicks him hard in the back and it’s off to Rusev for a chinlock. Jey finally fights up with a Samoan drop and makes the tag off to Jimmy as things speed up. A kick to the face gets two and there’s an enziguri to stagger Del Rio even more.

Jimmy goes up but gets crotched down but the top rope double stomp misses. The superkick and Superfly splash get a VERY close two on Del Rio with Rusev diving in for the save at the last second. Jey dives through the ropes to take Rusev out but lands on a raised boot. Back in and Del Rio kicks Jey in the head to tie him in the ropes, setting up the top rope double stomp for the pin at 13:25.

Ziggler is officially in the Rumble. Slater comes out with Adam Rose, Curtis Axel and Bo Dallas, all of whom have apparently been tweeting about change all day. Ziggler gets some early rollups and small packages for two each, followed by that dropkick of his. Slater chokes a bit and throws Ziggler down by the hair. That goes nowhere and Ziggler tries a superkick but has to go after Rose. Slater grabs a rollup and gets the big upset at 4:41.

Post match Slater says he’s found some friends, Rose talks about the four of them being flowers, Axel goes on about the chains being off and Dallas says it’s all about getting back up. Slater caps it off by saying they’re trending worldwide despite being social outcasts. That sounds like the team name.

Ambrose is defending the Intercontinental Title against Owens on Smackdown. On the same show, Lynch will be challenging for the Divas Title.

Vince comes in to see Reigns and tells him not to cheat tonight. Reigns seems uneasy.

Here’s New Day for a chat. Big E. promises to make this the greatest year of all time and they’ll start by beating up the Dudley Boyz and Kalisto like they were Mike Tyson falling off a hoverboard. We get a reenactment of Tyson falling and now it’s time for a countdown. The ten count gets down to three and BREAK DOWN THE WALLS!

Yes Chris Jericho is back and declares himself as the party host for the night. He’s here to save the WWE one more time, sixteen years after he debuted. Woods isn’t pleased because the New Day has already saved this company through the power of positivity. Now it’s time for Jericho to not be impressed because the unicorn horns are stupid.

Jericho says he’s back to bring some life to this place and he’s sorry that we had to sit through five minutes of Green Day and rootie tootie. Big E.: “WHO ARE YOU CALLING ROOTIE TOOTIE?????” The fans get in on the chant until Jericho announces his entrance in the Royal Rumble. The Y2J problem is back and the WWE will never EVER be the same again.

Woods and Kalisto start but Xavier wants Bubba. That’s fine with Bubba and Woods actually stays in the ring. A chop has no effect on Bubba and it’s time for a ROOTIE TOOTIE chant. It’s off to Kofi who is immediately caught in a delayed vertical suplex. JBL: “Put the unicorn down.” D-Von comes in and sends everyone to the floor, allowing Bubba to throw Kalisto out on top of everybody.

Back from a break with Bubba in trouble but avoiding a splash in the corner. That allows a tag off to Kalisto but it’s quickly time for the Unicorn Stampede. Woods slaps on a chinlock and the Warrior splash gives Big E. a near fall. Kalisto avoids another charge and makes the tag off to D-Von as everything breaks down. Bubba cleans house and Kalisto is driven into the barricade. A quick save keeps Kofi out of What’s Up and the Midnight Hour puts D-Von away at 16:40.

Here’s the same package that opened the show.

Reigns is defending and Vince is guest referee. Sheamus jumps him to start and gets a pretty quick two count. A hard Irish whip gets two for Sheamus but Reigns comes back with the corner clotheslines. Another clothesline puts both guys on the floor for no count as Vince doesn’t want Sheamus winning the match without the title. Sheamus gets in a shot with the steps but Vince wasn’t paying attention as we take a break.

Back with Sheamus getting two off the Regal roll but Reigns comes back with his array of clotheslines. The Samoan drop gets a VERY delayed two and the fans boo Vince out of the building. White Noise is countered into a sitout powerbomb for another two but Vince has something in his eye. Vince: “I NEED SOME EYEDROPS!”

Now it’s a Superman punch to knock Sheamus silly but Vince just won’t count. Reigns finally Superman punches Vince and spears Sheamus before calling for another referee. With nothing else to do, Reigns throws Sheamus outside and over the announcers’ table. Vince gets up so Reigns throws him back down and yells a lot.

Frustration gets the better of Roman and he grabs Vince with the fans chanting for the table. Cue a power walking Stephanie to get on the apron so Reigns throws Vince into the ropes, bringing Stephanie inside. She bails to the floor as Reigns loads up a spear to Vince but eats a Brogue kick. A second one knocks Reigns out but Vince is slow to count (looked like a missed cue). Crooked referee Scott Armstrong comes in to count two. Reigns blocks another Brogue with a Superman punch and spears Sheamus down to retain at 18:20. 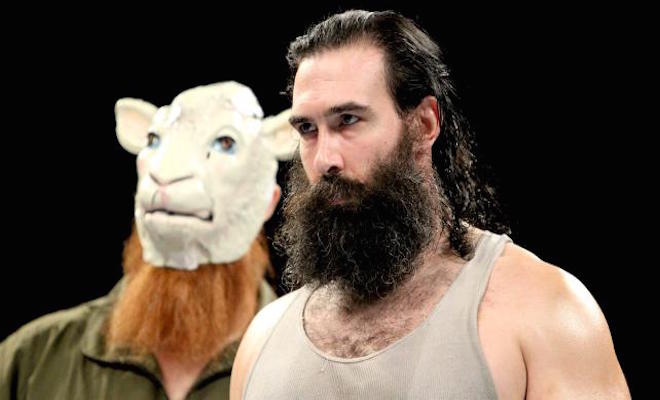 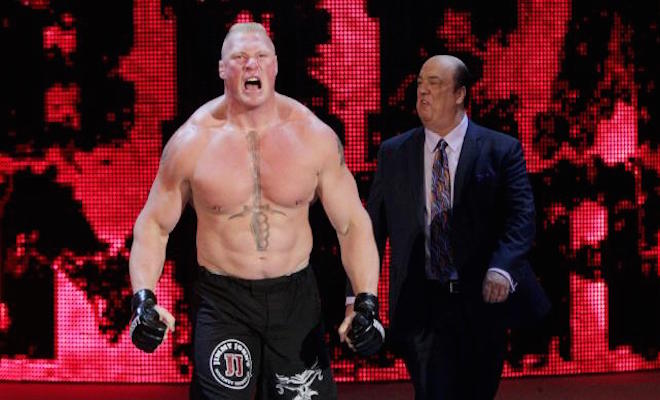