Before we get started, in case you would like to see the full show for free, check it out right here:

It’s the Salina de la Renta show as she is the executive producer tonight, which basically means guest GM. Thankfully we don’t usually have bosses around here so it’s actually a new idea and Salina is one of the best performers around. It’s also a night for her boys to get some revenge and some grudge matches have already been signed. Let’s get to it.

We open with a shot of Salina, ala the days of Eric Bischoff running Raw.

A shirtless Low Ki warms up in front of Salina as she is on the phone, talking to someone about expanding their operation. She doesn’t care that he’s worried about facing Daga tonight.

Opening video, featuring a lot of shots of Salina and her cronies..

Salina is at the commentary booth, where Rich has to read off her introduction. Cornette looks like he wants to stab her and Salina makes a woman on top joke.

We’re ready for the first match but Sami Callihan has commandeered a cameraman and uses a knife to break into the building. More on this later.

They slug it out on the ramp to start with Daga taking him inside for the right hands on the mat and in the corner. A hurricanrana sends Ki outside and of course that means the suicide dive. Some right hands knock Ki around ringside and a dropkick to the back of the head gets two inside.

Ki drops him face first onto the top turnbuckle though and a power drive elbow gives Ki two of his own. We hit the reverse chinlock and then the forward version, followed by the trio of the submissions with an abdominal stretch. That’s broken up and they slug it out until Daga hits a running clothesline for his own two.

The banged up Daga goes up top but misses a top rope double stomp, allowing Low Ki to go up top. A superplex attempt goes badly as Daga gets caught in the Tree of Woe but the top rope double stomp is broken up by a pull of the trunks to send Low Ki crashing down. Back up and Daga tries a butterfly suplex but gets reversed into a northern lights suplex. A pair of feet on the ropes is enough to pin Daga at 10:39.

Salina unveils the brackets for the Openweight National Title tournament:

We look back at LA Park winning Battle Riot II.

Tom Lawlor doesn’t care where Avalanche comes from because he’ll fight anyone. We also get a quick training montage as he grapples with Ariel Dominguez.

Callihan has gotten inside and beats up Ricky Martinez, stealing his phone in the process.

They fight over a wristlock to start and it’s a wristdrag from Hijo into a standoff. Gringo flips out of a hurricanrana and they both flip forward into a second standoff. A missed charge sends Gringo to the floor, setting up a slingshot hurricanrana. The suicide dive rocks Gringo, cutting off the commentary’s discussion about Salina’s dress. Back in and Park’s super Spanish Fly is countered into a super Samoan driver for two.

A Code Red (which Cornette has to describe because he doesn’t know the name) gets two as Rich tries to figure out how Cornette doesn’t know who Kenny Powers is. Park goes up again but gets reversed into a super Falcon Arrow for a crash and a near fall. Gringo’s piledriver is countered into a kneeling belly to back piledriver for the pin at 5:56.

Contra is ready for Barrington Hughes.

We recap Callihan’s actions tonight. All two of them.

Sami looks through the phone and finds Salina’s number. Salina is furious at Ricky for not answering but gets so mad that she speaks Spanish when she knows it’s Sami. He tells her to callate and shut up (that’s some overkill) while promising surprises tonight.

Next week: Barrington Hughes vs. Jacob Fatu and the tournament begins.

Park jumps him on the ramp for the second use of that same opening in three matches. They fight on the floor with Park posting him to knock Pentagon silly. The steps to the head make it even worse as it’s all Park so far. With Pentagon rocked pretty badly, they head inside for the first time with the opening bell probably making the ringing in Pentagon’s head even worse.

Park ties the strands of the mask to the ropes for a few open shots and it’s time to slowly walk around. Some belt shots to the back and chest keep Pentagon in trouble as Cornette tries to figure out which supernatural creature best describes Salina. Pentagon finally fights back with right hands as the announcers argue over how much Park weighs. A Park distraction lets Salina go after Pentagon’s mask so he kisses her back, much to her annoyance. An armdrag sends Park outside for a running flip dive against the barricade.

Back in and the Sling Blade gives Pentagon two but Park is right back with a release German suplex for two. Park seemed to bang up his knee though so Pentagon kicks him in said knee and hits the Backstabber out of the corner. A running knee gives Park two more but it’s clear that he can barely move. The low superkick puts Park down again but he’s right back up with a suplex into the corner. Park is fine enough for a heck of a suicide dive and a top rope spinwheel kick. The spear finishes Pentagon at 10:19.

Post match Salina complains about New York and how bad it smells. They have a big gift from their sponsors though and….it’s Mance Warner to brawl with Park. 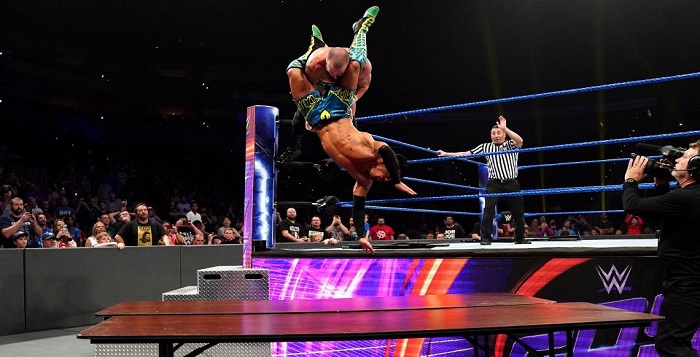