If you would like to see this show for free, you can check it out in full right here:

I’m not sure what is left from this show, but there assuming they taped their event in Mexico, they might have another four weeks left after this one. We’ll get to that later though as this one is all about fallout from last week. Therefore, it’s time for an eight man tag with Team Filthy vs. Davey Boy Smith Jr./the Von Erichs/Killer Kross, which could be a big deal. Let’s get to it.

The opening recap looks at last week’s brawl which set up the eight man tag.

Mance Warner has been attacked by the Dynasty and therefore, Maxwell Jacob Friedman is banned from the building. Warner will be in the corner of Richard Holliday’s mystery opponent though.

Feeling out process to start with the stronger Lindaman going for a waistlock, only to get rolled up for two. They spin up to a standoff and Lindaman slaps the hand but spins around into a discus forearm to rock Zenshi. That earns Lindaman a face first flip onto the mat and Zenshi hits a standing moonsault to the back for two. Zenshi dives to the floor, only to have Lindaman nail his own running flip dive.

After Lindaman poses on the stage a bit, he drives Zenshi back first into the apron. Back in and it’s time to work on Zenshi’s bad shoulder, with a Fujiwara armbar sending him over to the rope. A legdrop to the arm sends Zenshi to the apron, where he uses the good arm for a handstand into a kick to Lindaman’s head. Zenshi grabs a good looking slingshot neckbreaker but has to fight out of another armbreaker attempt.

A northern lights suplex sends Zenshi into the corner and a German suplex rocks him again. That’s fine with Zenshi, who hits a Pele for the double knockdown. The strike off goes to the stronger Lindaman until Zenshi starts the flips. A jumping kick to the head looks to set up a running cutter, which is countered into something like a Blue Thunder Bomb. Lindaman tiger suplexes him for the pin at 8:14.

Smith and company are ready to win because they have friends.

Mance Warner won’t say who his mystery man is.

Richard Holliday thinks the opponent could be Mance’s garbage truck driver or Kwang.

Contra Unit is ready to embark on a mission and prepare for the upcoming war. They still have soldiers hidden among us.

Holliday says he shouldn’t be in this match because Warner was too drunk to pick an opponent.

Injustice attacked Brian Pillman Jr. when he was with some fans. Davey Boy Smith Jr. made the save.

Warner comes out and introduces…..Blue Meanie. Dancing ensues as Warner sits in on commentary. Holliday even tries the dancing as there is no contact in the first minute. The fans don’t like the idea of Holliday dancing so they dance together until Holliday jumps him from behind over two minutes in. A clothesline drops Meanie so Holliday can dance again, only to have Meanie duck a clothesline. Some right hands get two but Holliday elbows him in the back of the head for two. Holliday heads outside to yell at Warner and have a beer, but Warner spits his in Holliday’s face, drawing the countout at 5:23.

Injustice doesn’t seem to like AAA or Brian Pillman Jr.

Mo hasn’t seen Low Ki knock anyone out because he’s a low key fraud. They fight next week.

And now, I kid you not, cooking with LA Park and Hijo de LA Park. Seriously they make sausage and eggs while talking about how great they are and promise to win matches. It turns into a metaphor for what people will need to beat them. Park eventually quits because he has no salt. This goes on for nearly five minutes.

Team Filthy is Tom Lawlor, Erick Stevens, Dominic Garrini and Rip Von Erich. Hold on though as Lawlor has to insult Philadelphia and its fans before we can get going. The fans tell him to shut the f*** up so Lawlor tells them there are kids in the crowd….and screw this place. It’s a big brawl around the ring to start until Lawlor and Ross wind up inside to officially get things going. A Sling Blade gets Ross out of trouble and it’s a running boot to the face in the corner to rock Lawlor again.

Lawlor takes Ross down though and the beating is on in a hurry. Stevens comes in and gets suplexed into Ross in the corner so Rip can kick him in the back. An enziguri allows the hot tag to Kross though and suplexes abound. A spinwheel kick drops Kross, who pops right back up to glare at Lawlor. Everything breaks down and Rip hits Smith low before grabbing a chair. Marshall cuts him off with the Claw though and it’s the claw slam into the moonsault for the pin at 7:49.

Post match Kross says we’re not done and grabs a board. As that is set up in the corner, Stevens and Garrini beat up Ross outside. That’s not important though as Rip is powerbombed through the board to…..set up one more brawl into the back. King Mo breaks a board over Kross’ back, siding with Team Filthy to end the show. 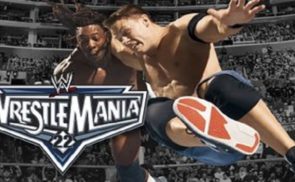 REVIEW: WrestleMania 22: No One Remembers This One 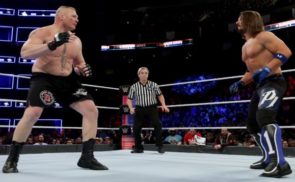