If you would like to watch this show in full, you can see it right here for free:

It’s the second week of the Opera Cup and that means we should be in for some more good wrestling. That’s the kind of thing that makes this show shine, with a show built around the action instead of their stories. The stories aren’t bad, but the roster is talented enough to make a tournament like this work. Let’s get to it.

The Dynasty arrived earlier today but didn’t want to answer questions about having to face off in the Opera Cup tonight. They always have a plan b.

Prince of Darkness (blindfold) match. They take forever to put the hoods on as the stalling is going to be strong with this one. The bell rings and they spend the first minute circling the ring, albeit with Warner taking no time in using the crowd to help spot Havoc. Warner finds the referee so Havoc avoids a charge in the corner as the lack of contact continues.

Havoc finally pulls the hood up to get in a cheap shot before stomping away in the corner. An elbow drop misses though and Warner hammers away as the announcers talk about how unlucky the referee is here. Havoc escapes and the referee has to get out of a DDT attempt. The hood comes off again so the distracted referee misses Priscilla Kelly coming in to hit Warner low. The Acid Rainmaker gives Havoc the pin at 3:38.

Tom Lawlor announces that the Team Filthy Dojo is open for business again but here’s Ross Von Erich for the brawl. Lawlor runs away.

Post break, here’s the same thing you saw before the commercial.

Alexander Hammerstone doesn’t want to hear questions about problems in the Dynasty. He loves MJF more than he loves his turtle Frankie (that nearly cracks the interviewer up) and here is the rest of the Dynasty to give him some juice. They make fun of the interviewer’s Canadian accent.

Mance Warner isn’t happy with Priscilla Kelly so here are Jimmy Havoc and Kelly to jump him, this time with a chain. Havoc even stabs him in the head with some scissors. They’ll have a barbed wire match in Dallas.

Remember Zero Hour? Here’s the same ad for the show.

MJF affirms his love for Hammerstone, who has the most important title in wrestling. So why does Hammerstone need the Opera Cup? Hammerstone doesn’t like the suggestion of throwing the match but here’s Holliday on the phone with his lawyer/father. This match is NOT going to happen.

The Strong Hearts are happy to be here but Contra jumps them.

We get the Zero Hour Control Center with only the barbed wire match being announced.

Non-title with Holliday at ringside. MJF says Hammerstone is going to lay down and even acts out the whole thing for an extra layer of realism. They exchange fingerpokes but MJF shoves him in the face, earning himself a hard shove. MJF is sent outside for the big dive with Hammerstone saying he’s the leader of the Dynasty. A missile dropkick sends MJF into the corner, only to have MJF send him face first into the buckle.

MJF throws on a bodyscissors and a knee to the ribs gets two. An abdominal stretch with a grab of the rope makes it even worse as the rather dense referee can’t figure out the cheating. He finally catches on and kicks the arm away, allowing Hammerstone to hiptoss his way to freedom.

There’s an overhead belly to belly to send MJF flying and a very delayed butterfly suplex gets two. Some pump kicks to the face stagger MJF but he gets in a superkick. One heck of a clothesline blasts MJF though and they’re both down. Holliday wants the match stopped and MJF gets in a low blow for two. MJF can’t hit a Cross Rhodes and it’s a sitout powerbomb (MJF: “OH S***!”) to give Hammerstone the pin at 8:14.

Post match MJF wants a handshake but collapses. Hammerstone leaves on his own.

Injustice doesn’t give a f*** about the Opera Cup but don’t think much of Stu Hart. They’ll take out someone in the tournament and do the New Day WHO WHO WHO bit until they realize that’s not their thing.

Von Erich and Lawlor fight on the streets of New York and the chase is on again.

Davey Boy Smith Jr. says it’s cold here but it’s really cold in Calgary. He’s ready for Low Ki tonight. Stu Hart won the Opera Cup over seventy years ago and Smith is ready to live up to his legacy. Then it’s time for the World Title.

They shake hands to start and we’re ready to go. Feeling out process to start with Smith going after the arm so Ki spins out and kicks his way to freedom. They go to the mat (you knew that was coming) and that’s a quick standoff. Smith takes him down with a headlock and gets a few near falls.

Ki fights up and snaps the arm across the top rope to take over. That just earns him a hard forearm off the apron though as there is little that works better than hitting someone in the face. A ram into the apron starts in on Ki’s back and we hit the chinlock back inside. The bearhug goes on instead as we get a better showcase of the power advantage.

That’s broken up and Ki kicks him in the face to get a breather. A running dropkick through the ropes has Smith in more trouble but he’s fine enough to send Ki into the barricade. Smith presses him back over the ropes and gets two off a powerslam. Some knees to the chest are shrugged off and Ki powerslams him for a change of pace. Ki grabs a choke from behind but Smith flips him forward into a cradle for the pin at 12:11.

Ross chases Lawlor some more but Lawlor escapes on a train to end the show. 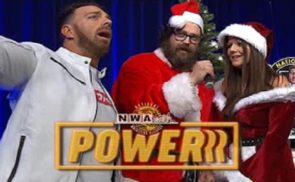 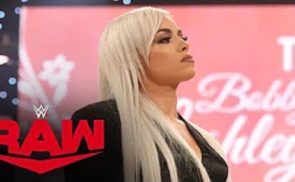