It’s tournament time as MLW is dusting off the Opera Cup. Now you may not have heard of the Opera Cup but that could be because it hasn’t been around in about seventy years. Stu Hart was the most recent winner but Davey Boy Smith Jr. had possession of the trophy and is willing to put it up in this tournament. Tonight starts the opening round so let’s get to it.

We open with Injustice in the ring ranting about something but their microphone gets cut. Apparently they’re mad about not being in the Opera Cup tournament, though they are alternates. They have a seat in the ring in protest but here’s King Mo, scheduled for the opening match, to interrupt. With Mo’s manager Dan Lambert on commentary, Mo is ready to fight here’s ACH to even things up a bit.

It’s Jordan Oliver/Kotto Brazil for the team. Injustice jumps them from behind to start in a hurry but ACH sends Brazil into Oliver as we settle down into something a little more structured. Some dropkicks have Injustice in even more trouble and a double hiptoss to Brazil makes it even worse.

ACH comes back in but gets pulled to the floor so Injustice can take over for the first time. Oliver holds ACH in the corner, setting up Brazil’s running shot to the face. A front facelock cuts off ACH’s charge to the corner and things slow back down a bit. Brazil grabs a Sharpshooter to send ACH over to the ropes and it’s a hard clothesline to drop Oliver. The hot tag brings in Mo and it’s time to clean house in a hurry.

Brazil is smart enough to cut that off in a hurry with a hurricanrana into an enziguri from Oliver. Not that it matters though as Mo spears both of them at once as everything breaks down. ACH kicks away, including a basement dropkick to Brazil. A Stinger Splash/enziguri combination sets up a sitout gutwrench powerbomb to Brazil. Mo slaps on a kneebar to make Brazil tap at 10:35.

Here are the Opera Cup brackets:

Konnan and Gino Medina had a meeting.

The Dynasty has some coffee but it’s GIFT TRAIN time! They are ready for the greatest Hanukkah SLASH Christmas ever. MJF has actually gotten Holliday the giant Air Pods and Holliday is in tears. They’re not connected to Blu-Tooth but Holliday has a present for MJF: Max Mini, as in a miniature version of MJF (not a mini luchador cameo alas). MJF isn’t pleased and has Hammerstone get rid of him.

Video on the Opera Cup.

Holliday shoves him in the face to start and that’s just not a good idea as he’s quickly suplexed down. Thatcher starts pounding away but a suplex into a swinging neckbreaker (the 2008, because it’s a recession for Thatcher) gives Holliday a breather. Thatcher shrugs off some shots to the head though and grabs a half crab. That’s switched into an ankle lock so Holliday rolls him into the corner.

Some forearms to the chest rock Holliday again but he scores with a quick DDT. A backbreaker and spinebuster give Holliday two more and he’s getting frustrated. Thatcher grabs a spinning butterfly suplex for two of his own and he takes Holliday up. That means a spinning 2008 to drop Thatcher….but he pulls Holliday into a Fujiwara armbar for the fast tap at 10:03.

The Von Erichs vent to their dad about Tom Lawlor. Kevin says he’s been there with a bunch of people turning on him over the years and it’s always about money. Go get revenge in the ring.

Josef Samael says Ikuro Kwon is on a special mission in Japan so Contra soldiers around the world are rising up.

The Strong Hearts are coming from OWE and want Contra.

Pillman works on the arm to start so TJP spins around a lot and grabs an anklescissors to take over. A headlock takeover works a bit better for Pillman, so TJP gets on his own shoulders….and crawls out to make Pillman look a little foolish. They both miss big kicks to the head and that means a standoff for some applause from the crowd.

A headscissors puts Pillman on the floor and a springboard slingshot dropkick knocks him silly. Back in and TJP starts some rapid fire kicks to the chest, setting up a Muta Lock to make it worse. That’s quickly countered into a chinlock so TJP lets go in a smart move. TJP slips out and cranks on the arm but Pillman grabs a powerslam for two of his own. A tornado DDT plants Pillman but TJP can’t follow up.

Air Pillman is broken up with a kick to the floor and the kneebar has Pillman in even more trouble. With Pillman getting too close to the ropes, TJP switches over to an STF but that’s broken up as well. Some kicks to the arm and ribs have Pillman rocked again so he comes back with a superkick. TJP grabs the Detonation Kick but Pillman ducks, setting up the Dire Promise for the pin at 13:24. 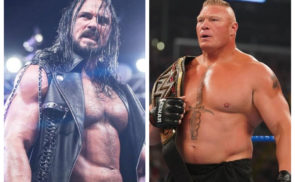 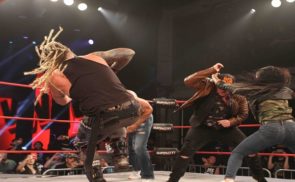