If you would like to watch this show in full, you can check it out for free right here:

We’re on the road to Dallas and War Chamber, meaning things should start picking up around here. That being said, it’s picking up at some odd spots as the World Champion is in the big team gimmick match and everything else has been the focus of the show. It has made for a different direction around here and that’s not exactly a great thing. Let’s get to it.

Mance Warner has been arrested on unspecified charges. More later.

Promociones Dorado may know something about Warner being arrested so we’ll be hearing from them later.

Salina de la Renta is at the police station giving her statement on Warner (who was arrested for aggravated assault over last week’s chainsaw incident) so Park is on his own here. Zenshi is from Chile and we’ve seen him before. Park starts with the hip swivel so Zenshi flips over him and it’s time for an exchange of evading. Zenshi slides to the floor and gets caught with the suicide dive for the first major contact. The 619 on the apron doesn’t have much effect on Hijo, who sends him into the barricade and gets in a powerbomb onto the apron.

Back in and a release German suplex gives Park two but Zenshi sends him hard into the corner. That means a diagonal Coast to Coast but Hijo is right back with a Code Red Canadian Destroyer for his own two and a pop up powerbomb for the same. Back up and Zenshi hits an awkward looking running flip cutter (think a running headscissors but with a cutter) for the pin at 5:58.

Post match Park hits him with a chair ala his dad.

The Hart Foundation is ready for Maxwell Jacob Friedman tonight.

There will be an MLW/The Crash show in October.

Low Ki, now a middleweight, wants a shot at Teddy Hart and the Middleweight Title. As for Contra, they’re about to be introduced to his professional presence.

Contra warns Tom Lawlor about coming after Fatu again. Fatu says this isn’t a podcast or the octagon, so the beating is coming. The Von Erichs haven’t been forgotten either and will get what is coming to them in the War Chamber.

Salina de la Renta and Jimmy Havoc (I guess last week wasn’t Loser Leaves MLW) don’t want to talk about Mance Warner but they’ll be waiting for him when he comes back.

The Von Erichs and Tom Lawlor are ready for War Chamber but won’t reveal their fourth member.

The Dynasty is happy with all of their gold and Holiday has made a pillow saying “Life If Beauty Full”. They talk about the people they don’t like (fat people, ugly people and Brian Pillman Jr.) and are ready for their matches with the Harts. Hammerstone is ready to conquer Germany and they put their fists together.

Some big shows are coming up.

Austin Aries is coming for the Middleweight Title.

Hart is defending and Aria Blake is with Friedman. Before the match, MJF has a mic but we need to stop for a lot of booing. He talks about being smarter than everyone and being better than Bret Hart, because he never lost the Middleweight Title. That’s enough to bring out Teddy (with Mr. Velvet) and we’re ready to go. Well after a pose off with the fans being quite a bit more behind Teddy.

They shake hands and hug but a quick spank is too much for MJF. Hart is a bit friendlier with Project Ciampa as the announcers compare the history of the two stables. Back up and Teddy snaps the arm around the ropes, setting up the Dungeon DDT for two. Aria gets up for a distraction so Teddy literally kicks her to the floor. Serves her right, though she might have just wanted some information on buying a cat.

With MJF on the floor, Hart loads up the Asai moonsault but Blake gets in the way. That earns her a seat in a chair but Hart walks into a superkick to put the champ in trouble. MJF tosses him into the post before it’s time to go back inside. This time Hart gets in a shot to the knee but gets sent into the buckle to slow things right back down. The chinlock goes on for a bit, followed by a belly to belly into the corner for two on the champ. Hart is back up with Code Red for two and a running Canadian Destroyer rocks MJF again.

The springboard Arabian moonsault to the floor drops MJF again, followed by a rather nice top rope DDT. The moonsault elbow gets two but a lower version hits raised knees and they’re both down again. MJF hits something like a curb stomp onto the turnbuckle and, say it with me, puts on the Sharpshooter. With that broken up, MJF hits the Heat Seeking Driver for two and can’t believe the kickout. Blake throws in a shoe and the distraction lets her get in a low blow but the referee ejects her before a cover. That’s enough of a distraction for Hart to hit the super Canadian Destroyer to retain at 12:00.

They Need A Check List. WWE Legend And Movie Star Annoyed At Being Left Out Of FOX SmackDown Live Trailer. 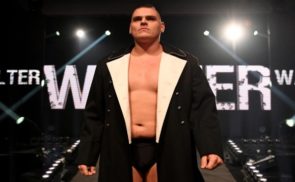