Things have suddenly changed around here as the wrestling world has all but shut down outside of WWE and AEW. That doesn’t leave much for MLW, but if my math is right, they should have about two weeks left after this. Once those shows are done, we could be in for some lighter shows, if there are any shows at all. We have one here though so let’s get to it.

We open with a recap of last week’s World Title match with Jacob Fatu retaining and Cima being taken away in a body bag.

No one has seen Cima since last week and his whereabouts are unknown.

Killer Kross is facing Tom Lawlor tonight, though commentary does acknowledge that Kross has signed with WWE.

Reed is defending and has the rest of Injustice with him while Kid has Konnan. Feeling out process to start until neither can get two off quick covers. That means a standoff as Jordan Oliver is still talking trash. Kid snaps off a hurricanrana and takes him to the floor, only to chop the chest protector. That doesn’t work, but a double chop staggers Reed, followed by a slap to the face to really knock him around. Reed is right back up with a reverse fireman’s carry slam into a low superkick for two.

A slingshot legdrop gets two but Kid snaps off a Michinoku Driver. The moonsault gives Kid two but Reed snaps off a springboard cutter. Reed gets caught on top for a dragon superplex, with Kid flipping over as well to land on Reed’s back for the nearer fall. A belly to back faceplant drops Reed again but Kotto Brazil has to be suplexed for interfering. Oliver gets superkicked off the apron and it’s a suicide dive to drop Brazil again. The distraction lets Reed hit a slingshot cutter to the floor though, setting up the springboard 450 to retain at 8:45.

The Dynasty is working on getting an injunction against Mance Warner because they have more important things right now. What matters though is marketing, so it’s time to rebrand Gino Medina as Gino The Untouchable. Tonight, Gino is going to send Mance back to the swamp to beat up more alligators.

Richard Holliday is here with Warner as this is fallout from the Dynasty attacking Mance’s uncle. Gino jumps him to start and stomps away in the corner but Warner chops his way to freedom in a hurry. They head outside for more chopping with Warner getting the better of it and sending him into the barricade.

Back in and Gino gets in some choking in the corner to set up the chinlock, which works as well as your average chinlock. A running knee in the corner into a low superkick drops Warner again. Warner pops back up and hits a running knee to the head for two so Gino grabs a rollup with jeans for two. You don’t do that to Warner though, who rolls Gino up with tights for the win at 4:58.

Colonel Robert Parker is coming back.

The Von Erichs went to their father’s house in Hawaii to ask for some advice about Team Filthy. They want a fight in Texas, with Ross saying they have to stand up to these people.

The Top Ten is back:

We get a special award presentation as Brian Pillman Jr. has won Pro Wrestling Illustrated Rookie of the Year….for the second year in a row! Pillman is proud to join the list of wrestlers to win the award and now he’s hungry for a shot at the Middleweight Title. And a third straight rookie of the year! And some cheesesteaks!

Myron Reed wants to know why he didn’t win the award because he can wrestle circles around Brian Pillman Jr. As for Konnan, he can keep sending his men at him and he’ll keep knocking them down.

Erick Stevens says it didn’t go well last week and he wants revenge. Tom Lawlor doesn’t think much of Killer Kross (“If that is your real name.”) and is ready to show him what a real fighter is.

The Dynasty is upset about the Warner loss but the lawyer/father is going to get involved.

We look at Cima being taken out in a body bag again last week.

The body bag is loaded into a van and Josef Samael says take it to Ikuro Kwon at the Gashel house.

Lawlor has Team Filthy with him. The fans seem into Kross and he can do that evil smile rather well. Kross kicks him in the chest to start and pounds away in the corner as the dominance begins early. They head outside with Kross hammering away even more, including a belly to back drop onto the apron. Back in and Lawlor hits a spinwheel kick to rock Kross for the first time Lawlor starts working on the arm. That includes a Pentagon Jr. arm snap, meaning Lawlor can throw in some shadow boxing.

Kross’ comeback is cut off with a kick to the back and the arm gets crunched again. A guillotine goes on but Kross suplexes his way out without much effort. Kross gets in a t-bone suplex but Lawlor is back with a bunch of strikes of his own. A high angle suplex doesn’t do much to Kross and knees to the head just make him smile. The Krossjacket Choke goes on with Lawlor flailing out to the floor into a double heap. Team Filthy jumps Kross for the DQ at 10:27.

Post match the beatdown is on but Davey Boy Smith Jr. and the Von Erichs run in for the save. Smith challenges them to an eight man tag next week and Lawlor accepts to end the show. 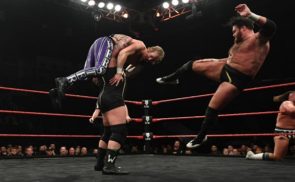 Daniel Bryan May Not Wrestle Full Time Much Longer