We’re on the way to Extreme Rules, which is currently missing out on anything extreme. I can’t really picture that changing here, but Main Event isn’t exactly a show that likes changing things up very often. At best we can get a few good original matches and that’s about all. Let’s get to it.

Ryker powers him into the corner to start so Gulak tries a slap to the face. This goes as well as you would expect as Ryker plants him down and hits a running headbutt. A shot to the throat slows Ryker down though and it’s a headlock takeover to put him on the mat. It takes Ryker a bit longer than expected to suplex his way to freedom as the comeback is on. A top rope hurricanrana of all things sets up the swinging Boss Man Slam to finish Gulak at 5:24.

Here is the Bloodline to get things going. Roman says WWE runs sports entertainment in New York. He runs WWE, so therefore, he runs New York City and Madison Square Garden. Therefore, MSG should acknowledge him. That leads to quite the cheering….and here is Brock Lesnar to interrupt. The Usos immediately get between Reigns and Lesnar, as Paul Heyman asks why Lesnar needs to go after the Universal Title. He could do….and then Lesnar grabs the mic.

Lesnar asks why Heyman didn’t tell Reigns he would be at Summerslam and the crowd’s YOU F’D UP chant has to be censored. Reigns glares at Heyman, takes the title and leaves with the Usos. Lesnar does his bouncing dance and Heyman does the old Lesnar introduction. Lesnar says that was great, but wants Heyman to accept his challenge to Reigns before Lesnar kills him.

That would be the challenge for the Universal Title, and Lesnar gives him five seconds. The F5 is loaded up but Reigns makes the save with the Superman Punch. Superkicks from the Usos don’t do much good and the Usos are destroyed as Reigns leaves with Heyman.

The Usos are defending and they start fast by sending the Profits outside. The big dive drops Dawkins and we take a very early break. Back with Dawkins shouldering Jimmy down for two but getting hit in the face. Jimmy knocks Dawkins down for two more but misses a jumping legdrop. That’s enough to bring Ford back in for a huge no hands dive onto both Usos. Cue Roman Reigns and Paul Heyman to watch as we take another break.

Back again with Dawkins grabbing a swinging neckbreaker and handing it back to Ford for the house cleaning. Ford loses a shoe and throws it out but hits a one shoed running Blockbuster for two. A Doomsday Blockbuster gets two and Dawkins is stunned at the kickout. Back up and Dawkins’ running leapfrog over Jey lands in a superkick from Jimmy. Ford pulls Jey outside, leaving Jimmy to get rolled up for two. The kickout sends Dawkins into a superkick though and the Superfly Splash connects for two more. Dawkins is back up to plant Jimmy and Ford adds the twisting frog splash, which draws in Reigns for the DQ at 15:20.

Post match Reigns says he’ll take Brock Lesnar on once he gets done with Finn Balor. Cue Balor….meaning the Demon. The Demon stares Reigns down to end the show.

Non-title, but it is a Championship Contender’s match. Earlier today, Nia Jax was annoyed at Baszler for costing her the Raw Women’s Title last week but they’ll be fine going forward. Maybe they can get some acting lessons together. Shayna goes after her to start but gets sent outside for the big slingshot dive to send us to a break.

Back with Baszler shaking the ropes to break up a moonsault but some elbows get Charlotte out of the Kirifuda Clutch. Baszler German suplexes the heck out of her for two and kicks away, which brings Charlotte back to life. A shot to the face staggers Baszler and Charlotte sends her outside for the moonsault.

Cue Nia Jax for a distraction though, allowing Shayna to send Charlotte into the steps as we take another break. Back again with Charlotte starting in on Baszler’s knee but missing a middle rope knee to the knee. Nia gets up on the apron to distract Shayna so Charlotte can hit a big boot for the pin at 14:25.

Post match Charlotte stays in the ring and here is Alexa Bliss, carrying both Lillie and a present. It’s a gift for Charlotte, but she doesn’t think Bliss knows her taste. Charlotte collects titles instead of dolls and at some point you have to leave your dolls at home. They do a near cartoon exchange of “you want it/no I don’t” until Charlotte accepts the present. Charlotte: “Well it’s not ticking.” And it’s a Charlotte style Lillie doll, which Bliss names Charlie.

Bliss wanted Charlotte to have someone to play with after she takes the title at Extreme Rules. Bliss: “She’s even a narcissistic little b**** like you!” Charlotte doesn’t want the doll and she’ll send Bliss a Mattel Charlotte figure when she is in the padded room. The fight is on and Bliss kicks her out to the floor. Back in and Bliss grabs a Code Red to send Charlotte running.

It’s time for a contract signing for Bianca Belair vs. Becky Lynch (not here yet) at Extreme Rules. Belair looks at the contract, but first talks about how she can’t believe she is here. She respects Lynch for being a new mom and a champion but she can’t believe Lynch ran from a fight. Lynch keeps talking about that 26 seconds at Summerslam because Lynch knows what happens when they’re in the ring in a real match. We’ll find that out at Extreme Rules and Belair signs.

Cue Becky, in a big red coat and sunglasses to amp up the heel look. Becky says she knew she had Esther’s number at Summerslam when she saw Belair’s face as her music hit. Belair can be the Man or she can be a fan and there is nothing wrong with sitting out there with the regular people. She’s going to give Belair a rematch and maybe she would have beaten her in twenty seconds here in MSG. So what if she doesn’t sign the contract. Adam Pearce: “What do you mean if you don’t sign it?” Belair: “SIGN THE D*** CONTRACT!”

The fans chant SIGN IT and Becky is confused. She sat at home and heard them chant WE WANT BECKY and she came back at the last second but this is how you treat her? She left her baby girl at home and now they’re picking a flash in the pan over her? Well if you can’t join them, beat them, and there’s the signing. Becky throws the contract at Belair and leaves.

Garza and Metalik tried takedowns for no counts to start and come up with a handshake. Metalik gets a boot up in the corner so Dorado can come in with a top rope hurricanrana. Garza and Carrillo are sent outside for the stereo dives and we take a break. Back with Dorado hitting a splash off of Metalik’s shoulders to crush Carrillo. Garza gets in a cheap shot from the apron to take over and come in though and Carrillo adds a powerbomb for two.

Carrillo and Metalik both head up top with the ladder snapping off a jumping super hurricanrana, allowing the double tag. Dorado kicks both of them in the face and gets two off a high crossbody. The Golden Rewind kind of connects with Garza and the moonsault kind of connects for two, leaving Carrillo to flip dive onto Metalik on the floor. Garza kicks Dorado in the face, TAKES OFF HIS PANTS and finishes with the Wing Clipper at 8:07.

On Raw, Big E. promised to cash in Money in the Bank.

Orton is challenging and MVP/Riddle as the seconds. They head outside early on where Orton has to save Riddle by sending Lashley into various things. A ram into the announcers’ table gives Orton one back inside but Lashley sends him into the corner. Lashley misses a charge into the post but he is fine enough to counter the hanging DDT. Orton gets sent outside and comes up holding his leg, only to be fine enough to drop Lashley onto the barricade. A clothesline sends Lashley over said barricade and we take a break.

Back with Orton forearming away and hitting a superplex to send them both crashing down. The delayed near fall sends Lashley outside, where he picks Orton up and sends him head first into the post. Back in and a running shoulder hits Orton’s ribs in the corner to drop him in pain. A neckbreaker gives Lashley two and we hit the chinlock. Orton fights up and hits a heck of a clothesline, setting up the scoop powerslam for two.

The RKO takes too long to set up though and Lashley hits the spear for the big near fall. The Hurt Lock doesn’t go on and it’s the RKO to drop Lashley…who rolls to the apron, with an assist from MVP. Orton gives MVP and RKO and the fans are WAY behind him…until another spear retains the title at 13:18.

Post match the brawl is on again with Riddle making the save. That earns him a beating as well, so Lashley puts him through the announcers’ table. Lashley comes up holding his knee though….and it’s cash in time!

Lashley is defending….or he would be if not for his knee injury. Big E. slaps him in the face and that’s enough to ring the bell. Lashley takes him to the mat and the brawl is on. A spear cuts Big E. down for two but he goes back to Lashley’s bad leg. The Big Ending gives Big E. the pin and the title at 1:18!

New Day comes out to celebrate and a lot of pyro goes off to end the show. 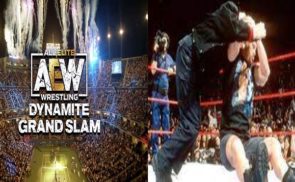