It’s time for another incredible use of an hour as I have no idea what to expect from this show. Things aren’t the most interesting at the moment as we’re just off of Clash of Champions and on the way to Hell in a Cell, meaning the rapid fire turnover continues. That could mean anything around here, so let’s get to it.

Mojo Rawley vs. No Way Jose

Rawley throws him around to start but Jose hits a dropkick in the corner. A trip to the floor lets Rawley clear his head and he drops Jose throat first across the top to take over. Jose’s discus forearm starts the comeback and a clothesline out of the corner puts Mojo down. The high crossbody gets two but Jose misses a charge into the corner, setting up the Alabama Slam to give Rawley the pin at 4:42.

We see a few seconds of Baron Corbin beating Chad Gable to become King of the Ring.

Clip of Gable taking out Corbin on Smackdown and destroying the throne and robe.

Clip of Sasha Banks and Bayley taking out Nikki Cross until Becky Lynch made the save. This set up Banks vs. Lynch in the Cell for the title.

Kevin Owens arrives and sits in the crowd. Shane McMahon is on his way to the ring to deal with this but gets served with papers. Shane isn’t happy with them and goes to the ring without saying anything.

Post break here’s Shane, with the papers, in the arena. He calls out some security but tells Owens to come into the ring. Security is ready but Shane tells Owens to come in and has security leave. The papers are the largest wrongful termination lawsuit in history, saying that if he is fired, he will receive $25 million.

They argue over the merits of the case, with Owens saying that Shawn fined him for attacking Elias when Elias was serving as a referee. Then Shane did the same thing to him last week, after Owens swallowed his pride and tried to get rid of the initial fine. Owens knows that he needs to hit Shane in the wallet, which is what he is going to do. With this case, he’ll be able to tell Shane that he is fired for a change. 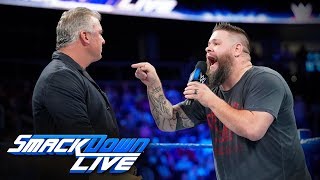 We look back at Luke Harper returning to take out Roman Reigns at Clash of Champions.

Here’s Daniel Bryan for a chat. He hears the DANIEL BRYAN chants but points out that a lot of those same people were accusing him of being behind the attacks on Reigns. Bryan may be a lot of things, but he is not a liar. Rowan is still his friend, and here he is in person. Rowan doesn’t like what Daniel is saying, because it was always about Bryan. It makes Rowan feel disrespected so Bryan tells him to do something about it.

Cue Luke Harper to jump Bryan from behind and the beatdown is on. Roman Reigns comes out for the save but gets beaten down as well, including a powerbomb against the post. Security gets taken out and the announcers’ table is loaded up. A double spinebuster through the table destroys Bryan to end the show. 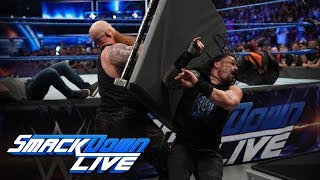 Kalisto/Gran Metalik for the House Party here. Young headlocks Metalik to start but the flipping is on in a hurry. The rope walk high crossbody gives Metalik two and it’s off to Kalisto for the rolling kick to the head. There are the double dives and we take a break. Back with everything breaking down and Metalik flip diving onto EC3. The Salida Del Sol finishes Young at 5:24.

Stills of Kofi Kingston retaining the Smackdown World Title at Clash Of Champions.

Post match here are Paul Heyman and Brock Lesnar with Heyman doing his intro and Lesnar making him get in the ring to say it. Lesnar is here to stand in the way of Kofi’s title reign because it’s a bad day for the New Day, yes it is. The challenge is made for October 4 on the first Smackdown on FOX. Kofi accepts because he’s not that bright at times. The ensuing F5 seems to back that up. 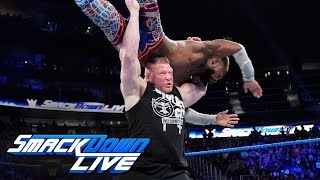 Stills of Seth Rollins retaining the Universal Title over Braun Strowman at Clash and getting beaten down by the Fiend after.

Non-title and Dolph Ziggler is here with Roode. Feeling out process to start with Roode armdragging him into an armbar. That lasts as long as any average armbar and Roode hits him in the ribs to take over. Roode knocks him off the barricade so Ziggler can get in a cheap shot and we take a break.

Back with Roode still on the ribs before sending Seth outside. This time Ziggler’s interference is cut off with a superkick and the comeback is on. The springboard knee misses but so does Roode’s spinebuster. That means Rollins can hit a Falcon Arrow for two, followed by the Buckle Bomb. The Stomp looks to finish but Ziggler comes in for the DQ at 10:25.

Post break the OC comes in for the 5-1 beatdown but Kane (in full gear and mask) of all people makes the save to a huge pop. The beatdown is on…and there go the lights. The Fiend is here and it’s a Mandible Claw to Kane. Fiend crawls over to Rollins and a minute long Firefly Fun House logo, with the colors changing, the graphic going upside down and the voice sounding rather evil, ends the show. 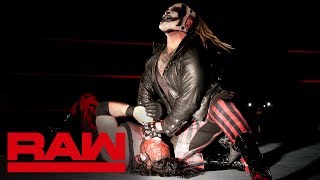 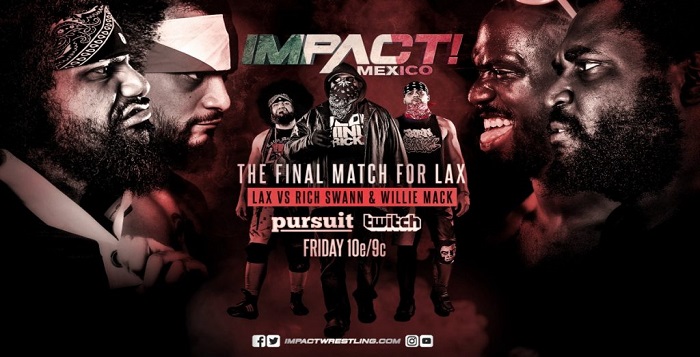 This May Never Happen Again. Here’s Why The Universal Title Is On The Line Next Week On Monday Night Raw.