We’re back to the low slow this week and that could mean more than a few things. I’m curious to see how much this show has changed now that the fans are back to energize the company, which should be a nice thing to see for a change. Then again, I’m almost scared to see what we could be getting again. Let’s get to it.

They grapple around to start with Gulak getting the better of things off a headlock. Garza slips out and takes Gulak down instead, setting up a quick chinlock. Back up and Gulak hits a slam into a clothesline for two as frustration is setting in. It’s time to start kicking away at Garza’s knee and we hit a wacky hold to put Garza in more trouble. Garza fights up and hits a flapjack, followed by the running forearm. That’s enough for Garza to TAKE OFF HIS PANTS and the Wing Clipper finishes Gulak at 5:20.

We look at Nikki Ash winning the Women’s Money in the Bank match.

From Smackdown, a rarity on a post pay per view Main Event.

Belair is defending and gets a rather strong reaction. A running shoulder puts Carmella down to start but she sends Belair hard into the corner for two. That earns Carmella a running shoulder into the ribs but she manages to post Bianca and we take a break. Back with Belair grabbing a suplex for two and going up, only to have to block what looked like a Stratusphere attempt.

A super hurricanrana brings Belair down for two instead and we hit the pinfall reversal sequence. Carmella grabs a guillotine choke but Belair powers her up for another suplex for two more. With nothing else working, Carmella grabs the hair and takes Belair outside for a whipping. Back in again and Carmella misses the superkick, setting up the hair whip. The KOD retains the title at 11:04.

Quick look at the Usos and Roman Reigns dominating at Money in the Bank, with John Cena returning to end the show.

Here is John Cena to get things going as they’re starting fast tonight. Cena says he can still see some people coming in so come on down. After acknowledging a kid’s “I’m turning 11 and I’m here to see John Cena” sign, Cena says he missed us. Cena talks about what a group effort Raw is and how he was here last night for the end of Money in the Bank.

Paul Heyman panicked, Roman Reigns didn’t know what he was supposed to do, Michael Cole was really happy and Pat McAfee still didn’t know where Cena was. Cena is back for Reigns and he thinks about five weeks from now in Allegiant Stadium in Las Vegas, Nevada sounds like a safe bet. He could talk about how important Summerslam is and how great it would be to win his seventeenth World Title, but it is a lot simpler than that: “Roman Reigns is an a******.” (WWE censored it too this time).

Reigns is an overhyped gimmick who isn’t as great as he says he is, “and that’s coming from ME”. Cena asks to hear the fans a bit more and says the saying goes if they’re great, the people will tell you. He’s going to be at Smackdown on Friday and he’ll see Reigns there. Cue Riddle and it’s time for a Bro Off.

Toni Storm is heading to Smackdown.

Bobby Lashley destroyed Kofi Kingston at Money in the Bank.

Non-title, though Graves suggested it was a title match before the bell. The GOLDBERG chants start us off as they shove each other around to start. Lee powers him around but the Spirit Bomb is countered into a Downward Spiral. A running clothesline puts Lee on the floor but Lashley can’t lift him up for the ram into the post.

Instead Lee splashes him against the post but an MVP distraction lets Lashley knock Lee off the apron. The spear cuts Lee in half and Lashley hammers away back inside. The Hurt Lock is blocked though and Lashley gets flipped over. That’s fine with Lashley, who hits a spinebuster to take him down again. Another spear gives Lashley the pin at 5:53.

Post match Lashley poses so here is the returning Goldberg. Goldberg says he’s next and Lashley is ready but MVP holds them apart.

They start fast with Ricochet dropkicking him down and hitting a backdrop, setting up the Eddie Dance of all things. Alexander catches him on the apron though and hits a hard clothesline as we take a break. Back with Alexander hammering away and kicking him in the back for two. The chinlock goes on, followed by a dropkick to give Alexander two more

Ricochet fights up but a knee to the ribs cuts that off in a hurry. A facebuster into a neckbreaker works better for Ricochet and there’s a hard clothesline. Alexander hits an awkward tilt-a-whirl backbreaker but the Lumbar Check (Alexander: “LUMBAR CHECK!”) is countered into a Canadian Destroyer. The Recoil finishes Alexander at 7:47.

Here is Charlotte for her big celebration of winning the title again. Rhea Ripley can rip off as many of Charlotte’s moves as she wants, but Charlotte won the title anyway. After explaining that Becky Lynch isn’t here because she’s at home taking care of her baby, Charlotte brags about all of the congratulations that she has received and talks about how she has won eleven women’s titles. She can beat Rhea Ripley any time so here is Rhea to say she wants the rematch tonight.  Charlotte says no, so Adam Pearce and Sonya Deville come out to make the match for tonight anyway. Charlotte kicks out Rhea’s knee and leaves.

Charlotte is defending and gets faceplanted to start. A whip into the corner has Charlotte shaken up again but she comes back with right hands to the face. Ripley shrugs them off and snaps off a German suplex, setting up a running basement dropkick for two. They head outside with Charlotte hitting a chop block to the bad knee, sending us to a break. Back with Charlotte taking the knee out again and crushing it on the mat.

Ripley manages a northern lights suplex but Charlotte boots her in the face. The moonsault hits raised knees though and Ripley grabs her own Figure Four. Charlotte turns that over for the break but Ripley hits a superkick into the Riptide for two as Charlotte gets a foot on the rope. That’s enough for Charlotte, who tries to walk out, only to hit Ripley in the face with the title for the DQ at 12:24.

Result: Rhea Ripley b. Charlotte via DQ when Charlotte used the title (12:24)

Post match Ripley jumps Charlotte again and lays her out….and we have a cash-in!

Nikki is challenging and a high crossbody gives her the title in 10 seconds.

Nikki celebrates in the crowd to end the show. 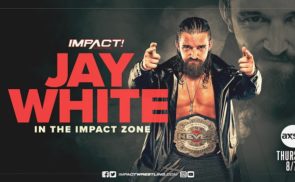