I’m a bit behind on this show but that’s interesting in a way. If nothing else, it shows just how fast the main shows come and go, because I can barely remember a single thing about what has happened in recent weeks. They just come and go with almost nothing sticking for any kind of time, and that’s not good. Let’s get to it.

Tom and MVP welcome us to the show and talk about how much we have learned from the Undertaker due to the Last Ride.

We open with Bayley and Sasha Banks brawling with Asuka in the ring as Samoa Joe is standing next to the contract table. Referees come out and break it up so Joe can do the introduction. The brawl is on again with Joe begging referees to get them apart. With the women separated, Joe introduces Dolph Ziggler as we’re doing both signings at the same time. Ziggler handles Drew McIntyre’s introduction and we’re finally settled down and ready to go. We’ll start with the men, with Ziggler talking about ending McIntyre’s nineteen year journey as McIntyre looks rather serious. Both of them sign with Drew saying it’s official.

McIntyre calls those serious words from Ziggler and talks about how they used to be family. As family, McIntyre is going to let him pick the stipulation for the title match. Asuka cuts him off by shouting in Japanese and signs her own contract. Banks promises to become Two Belts Banks and stamps her own signature on the contract. The brawl is on with Ziggler trying a superkick but McIntyre pulls it out of the air. The threat of a Claymore sends Ziggler bailing, along with Bayley and Sasha.

Here are Rollins and Murphy for the message. We see a recap of the issues with Rollins vs. Mysterio/Dominick, including Humberto Carrillo and Aleister Black nearly taking out Rollins’ eye last week. Back in the arena, Rollins talks about the duty that Mysterio has to his son. The problem is that Rey hasn’t been, ahem, seeing things clearly. Rollins talks about how he gave Rey a chance to get out with honor but Mysterio refuses to leave. They are bound by fate and as fate would have it, Mysterio is meant to be a sacrifice for the greater good of Raw.

Rollins is going to tear him down piece by piece, but here are Mysterio and Dominick on the screen. Rey says that there will be no forgiveness for Rollins no matter what. Mysterio loves Dominick, but now he has to do something even worse to Rollins. It’s an eye for an eye and it won’t be fate, because it’s going to be by design. Dominick can forgive Rey, but he’ll never forgive Rey, which will be ordained by fate. Rollins: “Oh bravo.” Cue Carrillo and Black and it seems that we have another match being booked on the fly.

Post break, Rollins and Murphy are still on the floor to yell at Carrillo and Black. Carrillo says Rollins will never be the man Mysterio is. Black knows evil when he sees it and promises to make Rollins atone for it. Rollins says this ends now and we’re ready to go.

Black kicks away at Murphy to start and scares Rollins off the apron. The distraction lets Murphy kick Black to the floor and Rollins stomps away next to the barricade. Back in and Rollins whips Black hard into the corner, setting up Murphy’s reverse chinlock. Black fights up with a shot to the head and it’s a hot tag to Carrillo, who has to chase Rollins to the floor. That lets Murphy get in a cheap shot but Carrillo enziguris him without much trouble.

A middle rope crossbody connects and Rollins comes back in, only to be sent outside. Another enziguri sets up the missile dropkick to Murphy and Rollins has to save Murphy from the 619. Carrillo hits the big springboard dive to the floor and we take a break. Back with Carrillo getting in a shot to Rollins for a breather. The diving tag brings in Black to beat up Murphy and moonsault onto both of them. Murphy counters Black Mass into a rollup so Black knees him in the face.

Carrillo comes back in for a 619 to Murphy for two with Rollins diving in for the save. Rollins dives onto Black and Murphy hits a running knee for two on Carrillo with Black making a save of his own. The Cheeky Nandos kick hits Carrillo and it’s a powerbomb/jumping knee to the face combination….for two. Black and Murphy head to the floor, leaving Rollins to Stomp Carrillo for the pin at 10:28.

Post match the brawl stays on with Carrillo taking the steps to the face, with Rollins putting Mysterio’s mask on him. Black has to save Carrillo’s eye from the steps so Rollins gives Carrillo the Stomp onto the steps instead.

It didn’t quite work:

Peyton Royce is here with Billie. They lock up to start and Kay completely fails at driving her into the corner. Belair powers her up onto the top without much trouble and then pulls Billie back to the middle. A standing moonsault gives Belair two but Billie is back with Eat Defeat for two as we take a break.

Back with Billie working on the arm and putting on a seated armbar. A rollup gives Billie two and she goes right back to the arm. Belair powers her up with a slam into a dropkick as the confidence starts rolling again. A Peyton distraction fails and it’s the KOD to finish Billie at 9:49.

Here’s Braun Strowman to talk about Bray Wyatt making him afraid. One night they were sitting in the swamp when Bray saw a snake coming out of the water. Strowman wanted to stomp it but Bray said that was his friend. Bray got face to face with the snake and it bit him, so Bray laughed. It was then that Braun knew he was facing something evil, so he started doing the devil’s work. And he loved every second of it.

We get one of the old Wyatt feed interruptions before Strowman talks about how he still has some of that evil inside him. Braun can’t keep living like this so let’s go back to the swamp. He’s either coming out of this a broken man or knowing that he beat evil. Then he can feed Bray to the alligators in the swamp. Bray’s laughter is heard and Strowman laughs with him.

Come out and play:

Bayley sits in on commentary as the guys start. McIntyre powers him around early on and chops away in the corner as Asuka is very pleased. A quick Fameasser doesn’t even give Ziggler one and it’s off to the women (Bayley: “MAIN EVENT TIME!”). Asuka shoves her around to start but Sasha avoids a charge. That means the threat of the Asuka Lock but the guys come in, allowing Banks to slip out. A spinning elbow to the face drops Banks to the floor though and we take a break.

Back with Ziggler rolling him up for two and hitting the delayed DDT. For some reason Ziggler tags Banks in and Asuka gets to come in as McIntyre is still banged up. Asuka hits a running knee to the face for two on Banks but Bayley offers a distraction. That lets Banks hit a Meteora off the apron (though she seemed to overshoot it) to knock Asuka silly. The chinlock doesn’t last long so Banks hits the double knees in the corner for two more.

Asuka gets in some knees of her own and it’s a double tag to bring the men back in. McIntyre hits the top rope shot to Ziggler’s head but Banks tags herself in. Banks yells at McIntyre, who punches Ziggler off the apron as the yelling ensues. Asuka comes in to kick Banks in the head for two but Banks reverses into a rollup for two. The Bank Statement is countered into the Asuka Lock but Banks flips back onto her for the pin at 14:04. 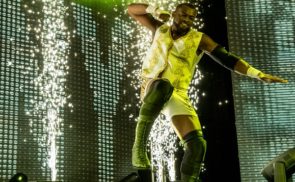 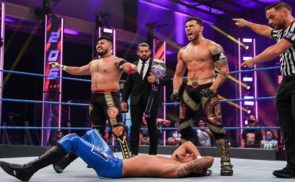