We’re well on the way to the Royal Rumble and that means things should be picking up around here. Unfortunately that has a tendency not to be the case on this show, but at least we are only going to have to deal with a few moments from last week’s Raw, which isn’t something that should be highlighted. Let’s get to it.

Rematch from last week when Garza.  Tozawa shouts a lot and kicks him in the ribs only to have Garza kick him in the face. That means GARZA TAKES OFF HIS PANTS, setting up a penalty kick for two. Garza bends the leg around the rope in the corner and fires off some more kicks, followed by the leglock. The leg gets tied up even more for something like the STF’s weird cousin until Garza picks him up for a reverse slingshot suplex. Tozawa fights up and tries the Octopus but gets superkicked down. The Wing Clipper finishes for Garza at 5:15.

Video on Adam Pearce winning the gauntlet match to become #1 contender, with a bit of help from Roman Reigns.

Here are Roman Reigns and company for the contract signing with Adam Pearce.  Hold on though Pearce sits but Reigns wants his chair. Jey gets Pearce out of the chair to give it to Reigns, because he is sitting at the head of the table. They both sign, with Reigns smirking a lot. Pearce says he has been waiting all night for Reigns to do that, picks up the contract, and leaves.

Pearce starts limping on his way up the ramp, saying it’s an old injury that flare up every now and then. However, all WWE contracts say “card subject to change”, an as a WWE official, Pearce will find a suitable replacement for Reigns. That’s just what he has in mind, so cue Kevin Owens to sign the contract to face Reigns at the Rumble in the Last Man Standing match. Just like Raw has done a few times in recent weeks, the show cuts off during commentary’s closing line.

And now, the Dirt Sheet. Miz and John Morrison talk about how great things could be for Goldberg if he wins the title one more time. That brings us to their guest tonight: Goldberg! Uh….make that Gillberg! As cliched as that might be, it’s nice to see Gillberg after his recent health issues. Anyway, Gillberg talks about everything he does in his entrance, but here’s…..a mini Drew McIntyre to interrupt.

After putting in the mini sword (Joe: “That’s the Clayless.”), mini Drew (with his kilt a bit too low and having to adjust his hair) says he is here to address his Royal Rumble opponent face to face. Drew promises to kick Goldberg back to 1998 and then go home and eat some hagis. Morrison mocks Drew’s accent and Drew breaks character, asking if we can do it again.

Miz snaps on Morrison for getting an actor from New Jersey instead of New York, LA or Cleveland. Morrison: “CLEVELAND???”  Gillberg interrupts with his goofy face and gets a double shut up. They decide to wrap it up with Miz saying Drew and Goldberg will both lose at the Rumble because Miz is cashing in, because he’s the Miz and he is……next.

We get a special report, featuring HHH (Henry E. Panki) and Stephanie McMahon (Anita Reelman) as news reporters. Weatherman Sunny McCloud (Roman Reigns) and Paul Heyman announce that Wrestlemania XXXVII will be in Tampa. Hailey Mary (Sasha Banks) is in Dallas, where Wrestlemania XXXVIII will be held in 2022. Then Hugh Kantseeme (John Cena) is in Los Angeles, where Wrestlemania XXXIX will be held in 2023. Then they’re off the air and HHH and Stephanie take off their costumes to say they were both awesome.

Feeling out process to start with Carrillo armdragging him into an armbar as commentary actually remembers that Carrillo had a US Title shot on last year’s Royal Rumble Kickoff Show. Gulak fights up but it’s the springboard headbutt to put him back down for the first two. Another springboard is countered with a shove out to the floor in a crash though and we take a break.

Back with Carrillo fighting out of an armbar and nailing an enziguri for a breather. There’s a backbreaker for two on Gulak and something like a Spanish Fly into a small package gets the same. Carrillo’s high angle springboard armdrag is blocked and Gulak goes for the cross armbreaker. A foot in the rope breaks it up so Gulak plants him down for two more. Carrillo is right back up with a springboard kick to the face though and the moonsault finishes Gulak at 10:41.

From the shadows, Randy Orton talks about people who fight fire with fire usually wind up with ashes. We see a mask over his face as he says the voices in his head have never been louder. He talks about needing to redirect his pure hatred and we see Alexa Bliss throwing the fireball last week. The fire that melted the skin off his face will never go away. He is wearing his mask to protect himself but to shield everyone else from the horror.

The burns could have been much worse or could have disfigured him forever. Orton doesn’t blame her though because he blames the Fiend. Orton blames the Fiend for this because he knows what the Fiend wants. The Fiend wants to stop Orton from achieving the inevitable. We see clips of Orton’s two Royal Rumble wins as Orton talks about how he would be a threat to win the Rumble even if you chopped off all of his limbs.  He enjoys the pain and you can blame the Fiend when he burns everyone’s Wrestlemania dreams to ashes. Orton lights and the blows out a match.

Here is Alexa Bliss for Alexa’s Playground. She wants to address the viper in the room. Things got a little heated with Randy Orton last week but she knows someone if he is interested in some sunblock. As for tonight though, her guest is Asuka, who looks scared of where to sit. Bliss says that isn’t your seat, but she wasn’t talking to Asuka. For now though, Bliss has some special news.

After asking the invisible person in the swing if she should tell them, she announces her entry into the Royal Rumble. That means she could go on to Wrestlemania to face Asuka, who says she is a big fan of Bliss. Asuka, sounding rather nervous, says yowie wowie. Bliss apologizes to whoever is next to her and Asuka starts dancing. Bliss shouts to stop it and talks to the swing. Asuka tries to calm Bliss down by saying he is still here, but Bliss says not to say his name. A scared Asuka leaves.

Non-title. Asuka starts fast and doesn’t seem so scared this time around. An early Shining Wizard connects and Bliss is rocked, but the lights go out Fiend style. Bliss smiles a lot as we take a break. Back with Bliss seemingly transformed (and maybe with different lipstick) into the serious version and Asuka not being sure what to do.

Bliss blocks and dodges a bunch of strikes before shouldering Asuka down without much trouble. Back in and the Mandible Claw is loaded up but Asuka manages to block it. The rapid fire kicks rock Bliss but she grabs Sister Abigail and, with a blank stare, finishes Asuka at 11:36.

Post match the lights flash and Bliss’ makeup changes because she’s the happy version again. Fiend’s LET ME IN ends the show. 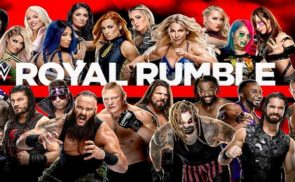 REVIEW: Royal Rumble 2020: What A Difference A Crowd Makes