We’re FINALLY getting out of Philadelphia with the seventh TV show from the same arena in less than a week. That’s just staggering when you think about it but somehow WWE puts out that much material at once, even if you consider that one of them is Mixed Match Challenge. You know, if you’re one of the small number of people who actually watch the show. Let’s get to it.

The rest of Absolution is here so Graves gets to swoon over Mandy. Sonya takes her to the mat to start and wraps her up with a bodyscissors. An easy takedown keeps Bayley in trouble before Sonya punches her in the face a few times. Bayley snapmares her down though and hits a running basement clothesline for two.

Back up and Sonya unloads on her with right hands in the corner before it’s back to the bodyscissors. That’s enough for Bayley who takes her down and hammers away, knocking Sonya to the floor in the process. Bayley even shoves Mandy down, followed by a quick rollup to end Sonya at 5:06.

Banks slaps her in the face to start and takes Asuka into the corner for a ram into the buckle. That just earns her a kick to the head and a hip attack to put Sasha on the floor. Back in and some kicks to the legs set up the armbar to keep Sasha in trouble. Banks fights up with a kick to the face and running double knees as we take a break.

We come back with Asuka in trouble after the double knees in the corner, followed by the double arm crank. A headscissors into a very fast Bank Statement is countered into a rollup for two. Sasha gets it right back on but Asuka rolls out again before being sent outside. Banks’ dive is blocked with a kick to the face for a SCARY crash to the floor.

Back in and Asuka unloads with a knee to the face and some HARD strikes to the head. The hip attack in the corner sets up a missile dropkick for two so it’s off to the cross armbreaker. Banks reverses that as well and Asuka’s running hip attack misses, sending her outside in a heap. Banks follows with the knees off the apron (nearly crushing Asuka’s head in the process) and more of them off the top for a close two. The Bank Statement goes on again but Sasha tries to move it back to the middle, allowing Asuka to reverse into the Asuka Lock for the tap at 14:28.

Miz is defending and gets punched in the face to start as the beating is on in a hurry. For some reason Miz tries a chop and is suddenly the Ric Flair to Reigns’ Sting. The champ gets knocked outside for a whip into the steps as the one sided beating continues. Reigns grabs a chair to chase the Miztourage off but Miz posts him to take over as we take a break.

Back with Reigns fighting out of a chinlock and grabbing a Samoan drop. Glad to see some things never change. Miz actually wins a bit of a slugout until Reigns hits the corner clotheslines and a big boot to take over again. The YES Kicks have Reigns in trouble and a chop block puts him down.

We hit the Figure Four for a good while until Reigns turns it over, sending Miz to the ropes. Reigns’ lifting sitout powerbomb gets two so Miz goes to the turnbuckle like last week. That’s intercepted though and Miz pokes Reigns in the eye so the Skull Crushing Finale can get two. The Superman Punch gets the same but here’s the Miztourage to interfere again. That earns them a Superman Punch and a spear but Miz grabs a rollup to retain at 18:07.

Dorado wastes no time in hurricanranaing Gallagher down, setting up a standing moonsault for two. Back up and Jack does his handstand in the corner but get sent outside for his efforts. Kalisto comes in and takes Jack down from the apron, only to have TJP take Kalisto out, sending him throat first onto the ropes.

Back from a break with Metalik walking the ropes into the dropkick on TJP. The Metalik Driver gets two on TJP with Gallagher making the save. Everything breaks down and Dorado’s double handspring Stunner drops Daivari and TJP. Kalisto moonsaults onto Gallagher, leaving Metalik to charge into TJP’s boots in the corner. Daivari tags himself in though and TJP isn’t happy. A pair of kicks to the head lets Metalik drop the elbow on Daivari for the pin at 7:27.

AJ wastes no time in headscissoring Owens into the corner so it’s off to Sami to work on Nakamura’s arm. Styles comes back in for a few kicks before Nakamura is back in, only to be taken into the corner for the double stomping. Nakamura fights back with some shots to the head and we hit the front facelock. Sami gets thrown outside but Owens uses the distraction to shoulder Nakamura down.

That leaves Sami down on the floor so Owens yells at him, meaning it’s time for the big argument. That’s too much for Sami and he takes the walk up the ramp as we go to a break. Back with Owens holding Styles in a chinlock as Sami watches from the stage. AJ’s belly to back facebuster gets two as Sami runs back in for the save. Sami comes in for two off a backdrop and it’s quickly back to Owens for two off the backsplash. Owens chops Sami for a tag but that’s not cool with Zayn, who does the same to bring Owens right back in.

They get knocked into each other so Sami leaves again, leaving Kevin to break up the Phenomenal Forearm. A Vader Bomb elbow gets two but the Pop Up Powerbomb is thwarted. Instead it’s off to Nakamura for some kicks, only to have Owens bail before Kinshasa. AJ throws him right back in though and it’s a spinwheel kick to the head, followed by Kinshasa to give Nakamura the pin at 15:25.

Balor has Anderson and Gallows in his corner. The fans are behind Balor of course as he takes Cena down into an armbar. Balor does it again but Cena takes him down with two straight headlocks. Cena gets sent outside and points at a fan as we hit a test of strength. The fans are looking at something else, which is initially booed and then cheered. The camera cuts to the side as Cena looks into the crowd to see what’s going on. Cena punches Balor down and we take a break with Cena looking at the crowd again.

Back with Cena tossing Balor into the corner a few times but stopping to look at the crowd. The announcers say the fans are getting to him, which is a weird way to go with Cena. The finishing sequence is initiated but the Shuffle takes WAY too long, allowing Balor to move. Balor gets two off an Eye of the Hurricane and scores with the Pele.

The Sling Blade sets up the shotgun dropkick but Cena is right there with a clothesline to take him down. Cena grabs the AA for two and goes to the apron….where he tells Coach that he’s just trying to go to Wrestlemania. He takes way too long to go up top and Balor kicks him down, setting up the shotgun dropkick. The Coup de Grace misses and Balor bangs up his knee. We hit one of the worst looking STF’s Cena has ever put on but Balor makes the rope. Balor takes too long going up and it’s the Super AA for the pin at 17:48. 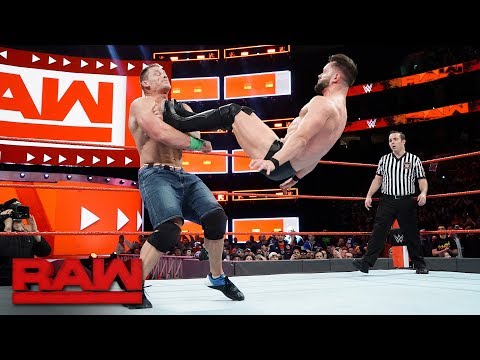 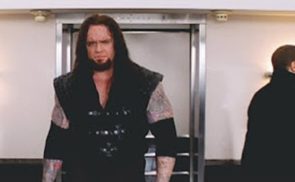 Video: Behind the Scenes From WWE’s 1999 Super Bowl Ad 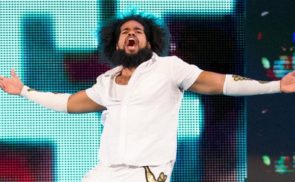 No Way Jose Discusses His Time Away From NXT, Plans Now That He’s Back