Let the recapping continue as we move towards Summerslam at what somehow feels like a rushed and slow pace at the same time. This week’s TV featured the big ideas of Retribution and Raw Underground, both of which could be quite interesting if WWE can pull off a miracle. I’m not sure how they are going to go in short form, but WWE has done weirder things. Let’s get to it.

Ruas has been on NXT before and has spent a good deal of time in Evolve. Carrillo ducks a big kick to the head to start and they grapple into the corner. An armbar takes Carrillo down but he spins out of a wristlock without much effort. A crossbody sends Ruas into the corner for a running dropkick to the floor. Ruas is back inside before the dive though and that means a jumping knee to the face back inside. Back in and Ruas kicks away before grabbing the quickly broken chinlock. An armbar works a bit better but Ruas misses a running knee in the corner. The high crossbody gives Carrillo two and it’s a torture rack into a faceplant for the pin on Ruas at 5:27.

We go to the Firefly Fun House where Bray Wyatt has a snorkel because he was looking for Braun Strowman. Though maybe the alligators have already eaten Braun. All Bray ever wanted to do was save Braun but now HE is awake and HE wants something Braun has. Until HE gets it, none of you are safe. Let him in.

Bayley is defending and Sasha Banks and Alexa Bliss are the seconds. Cross starts fast by knocking Bayley around and hitting a monkey flip. The Purge is broken up so Nikki slams her head first into the mat over and over. Bayley is back with a shot in the ropes but Nikki sends her outside in a crash as we take a break. We come back with Bayley running Nikki over and sending her into the buckle. A belly to back suplex drops Nikki on her head for two but a shot to the throat gets her out of trouble.

There’s a tornado DDT for two on Bayley and a reverse DDT onto the apron has her in more trouble. Back in and Nikki gets two off a Regal Cutter but Bayley snaps her throat first across the rope. Bayley goes over to the announcers’ table to mock Nikki’s dance for reasons of general cockiness, allowing Nikki to take her down by the leg. A dropkick through the ropes takes Sasha down and they fight over some rollups for two each. Bayley pops back up and hits the bulldog driver to retain at 10:30.

Post match Bayley and Banks leave and the copyright comes up but we stay with Bliss trying to help Nikki up. Nikki says no and shoves her down before leaving on her own. Cue the Fiend of all people to kneel next to Bliss and hold out his hand, which she looks at while shaking her head. Fiend Mandible Claws Bliss to end the show.

Bad to see you again:

Here’s Drew McIntyre for a chat. He talks about Randy Orton has spent twenty years preying on vulnerability and then coming after McIntyre last week after an Extreme Rules match. McIntyre should have seen it coming and that’s on him. He has gotten in trouble for being lazy before and that was why Vince McMahon fired him. Orton has had everything handed to him over the years though and has gotten in so much trouble over the years that he should have been fired a long time ago.

Cue Orton with Ric Flair to say he wants to be here because he enjoys being here. He enjoys hitting RKOs and punting heads. Orton likes Drew’s spirit, which is going to make beating him at Summerslam all the sweeter. Reigns says Orton should have been fired years ago and he’s right. Orton should have been fired multiple times but Drew was the one who was fired. That’s because Orton was more valuable to this company than Drew ever could be. He has gotten chance after chance because he is the chosen one, then now and forever.

Drew has been quoting legends, but what has he done that makes him that great. McIntyre talks about Undertaker saying he pulled Orton up to his level in the Last Ride, but when has Orton ever done that? How about ten years ago? When Drew’s career was falling down around him and he was self destructing, a kind word from someone like Orton could have changed everything.

Drew looks at Orton and sees a selfish jerk, so at Summerslam it’s time to cash in some receipts both for himself and all the legends that Orton has kicked in the head. This time though, Orton will see it coming.

Moss throws him down with straight power to start and then does it again for a bonus. Ali’s chop has no effect and a dropkick doesn’t do much better. Another hard shot to the face gives Moss an early two and we hit the chinlock. We take a break and come back with Moss being pulled off the top but taking out Ali’s knee.

Moss stomps away in the corner and a leglock sends Ali to the ropes. That’s fine with Moss, who wraps the knee around the post. A snap suplex gets a very delayed two and we hit the half crab. That’s broken up and Ali kicks his way out of the corner, setting up the rolling X Factor for two. The tornado DDT gets the same but the 450 misses. Moss’ neckbreaker is good for the pin at 11:06.

We look at Sonya Deville jumping Mandy Rose and cutting her hair.

We look back at Seth Rollins destroying Rey Mysterio and tormenting his family.

Here are Seth Rollins and Murphy so Seth can make a statement, but first he wants to ask Tom Phillips if he is an unbiased journalist. What was he doing last week when Dominic was attacking Seth with a kendo stick? Rollins starts shouting about Phillips cheering him on and inciting his rage. It’s the bias that causes these problems, so Murphy is going to take care of Phillips. Samoa Joe stands up and says that isn’t happening because he was laughing harder than anyone last week.

Rollins says Joe doesn’t want to do this but Joe says he does. Rollins and Murphy roll inside and tell Joe to come join them. Joe takes off the coat and we go to a break. Back with Joe still not in the ring but here’s Dominic with a kendo stick to lay out Murphy and Rollins. Dominic hits a big dive off the top to take both of them down and the two run off. Rollins grabs the mic and says the match is on for Summerslam.

See you at Summerslam: 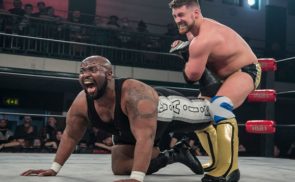 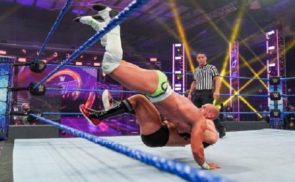