One more show from New York and we’re out of here until…well until they get Wrestlemania next year because it’s the greatest city in the world. Or so I’m told. Anyway this is going to be about the fallout from Summerslam, which actually gave us two rather strong shows. If they’re chopped up properly, we could be in for a nice week. Let’s get to it.

Here are the Summerslam results if you need a recap.

No Way Jose vs. Mike Kanellis

Mike headlocks him to start as we hear about Maria Kanellis injuring her wrist but trying to get back by Evolution. That’s one of the first times we’ve heard any specifics about her status. Jose pops up without much effort and grabs a hiptoss, only to miss a charge into the corner. Showing some intelligence, Mike stomps away on the arm but spends too much time blowing a kiss, allowing Jose to avoid a charge of his own. A fireman’s carry flapjack gets two but Mike snaps the arm across the top rope. Kanellis’ superkick gets two but he’s slow going up, allowing Jose to punch him out of the air for the pin at 5:16.

The women’s division is around the ring (including the Bellas) for the presentation to Ronda Rousey and here’s Stephanie strutting to the ring to soak in their applause. After putting over Evolution, we see a package on Rousey destroying Alexa Bliss last night to win the title. Stephanie is proud of Rousey because this never would have happened without Stephanie’s business prowess. She shined Rousey up like a diamond and now everyone around the ring wants to be like Stephanie and Ronda.

Here’s Rousey but Stephanie wants to know why the fans aren’t chanting for her. Rousey says this isn’t about Stephanie for once and wants to know why the women aren’t all in the ring. They get on the apron and Rousey cuts Stephanie off again, saying that this is about everyone instead of just one person. Rousey puts over Natalya as the cornerstone of the division and the Banks vs. Bayley match from Takeover a few years back. She’s not Brock Lesnar because she’s going to be a fighting champion.

Stephanie says it’s true that Rousey isn’t Lesnar because this isn’t the Rousey who wanted to break people’s arms. Just look at poor Alexa Bliss, like in this clip where Rousey dislocated her elbow. Rousey wants to break everyone’s arm and take all of the spotlight. Actually that’s not true as Rousey is only going to break the arms of those who deserve it.

Stephanie gets her arm barred again (with the elbow being regularly bent, meaning it shouldn’t hurt that much) and screaming ensues. The face women, including the Bellas, pose with Rousey and it’s a big group hug. 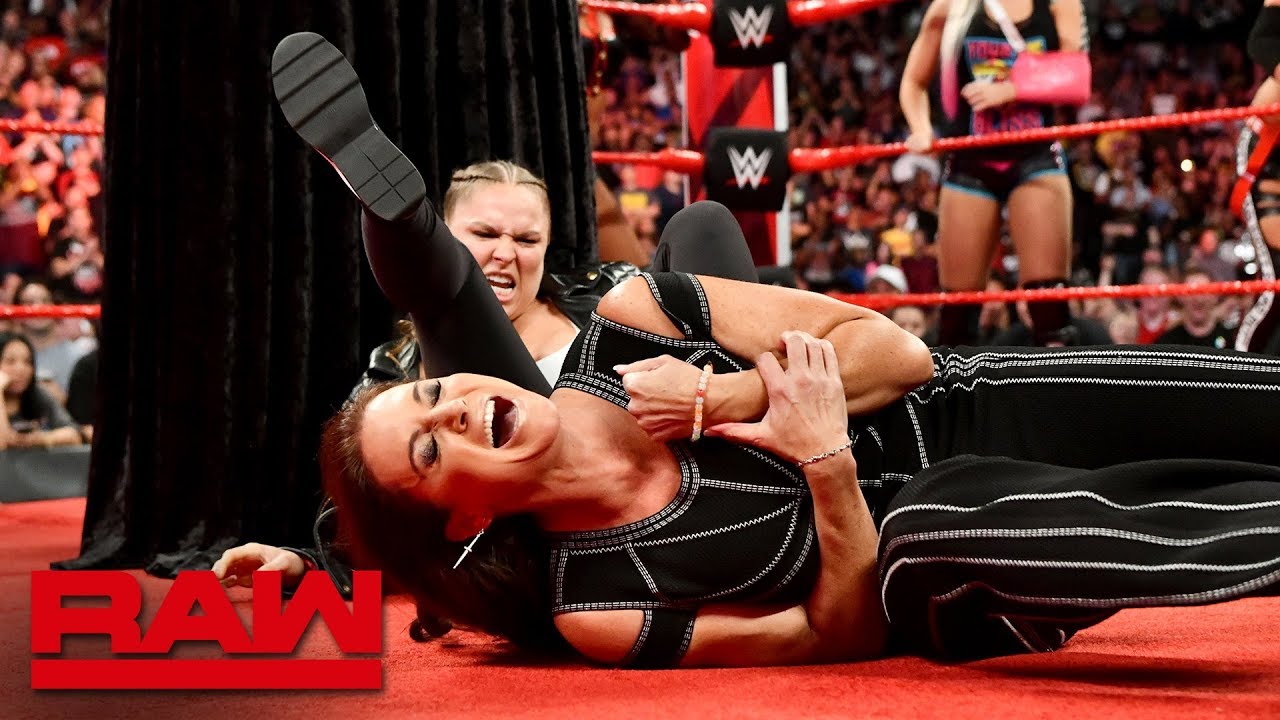 Stephanie is getting her arm looked at with Corbin and Bliss in the trainer’s room with her. Angle comes in and Stephanie yells at him, saying he needs a vacation. Stephanie makes Corbin the new acting General Manager.

We get a clip of the Becky Lynch promo and subsequent brawl with Charlotte from Smackdown, but I’m not going to copy it from the old review as usual because it’s rather different. The version aired here doesn’t include Lynch ranting against the fans or really anything to suggest that she’s a heel. In other words, it’s made to look like she’s a fired up woman who got ripped off. 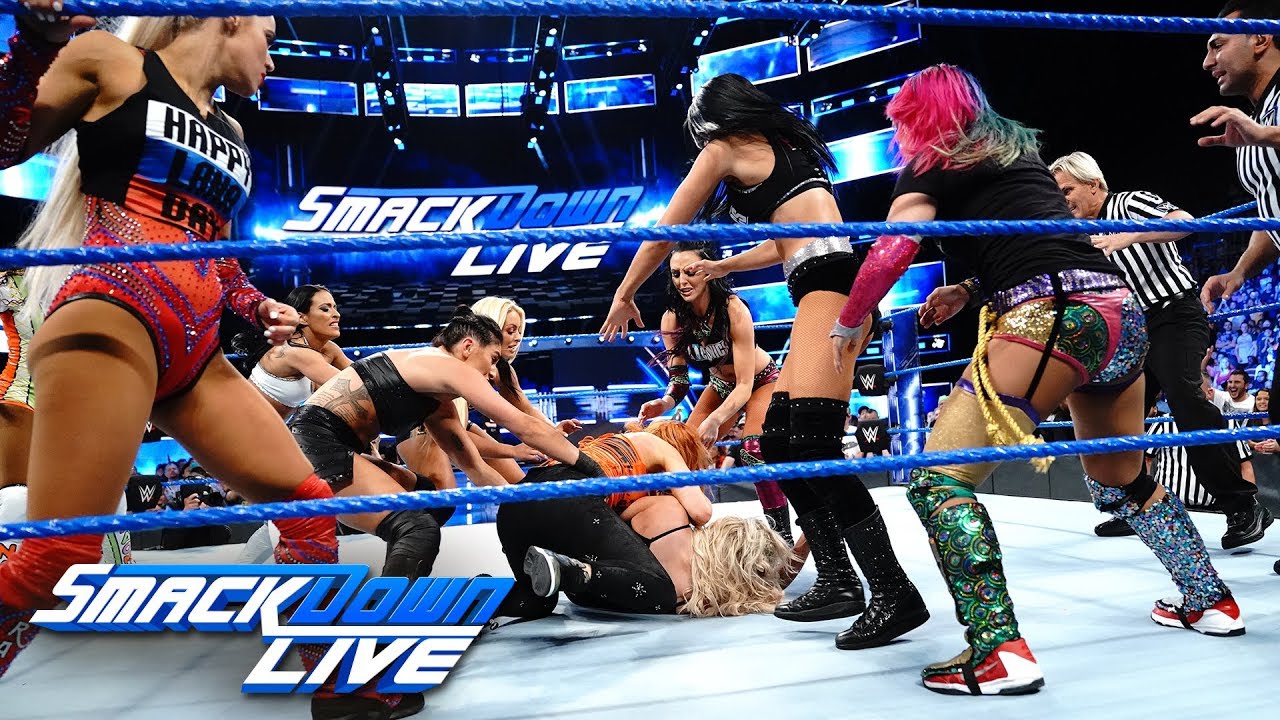 From Smackdown, unedited this time.

Miz and Maryse open things up with Miz looking rather serious until the Daniel Bryan chants start up. Miz says he was able to close his eyes and feel that in a way he never could before. Two nights ago, something happened at Summerslam and now he has a family to think about. Maryse is hugging Miz as he looks near tears and says that with a heavy heart….hang on as he needs to cry some more. He announces his retirement and there’s a YES chant.

Actually it’s his retirement of ever facing Daniel Bryan again because Sunday was a satisfying conclusion. Miz did exactly what he promised to do when he beat Bryan in front of a sold out Barclays Center. The 100 punches from Bryan didn’t equal one Miz punch because he has the hardest punch in this entire arena. Bryan promised to punch him but when Miz did it, he got the pin. Miz praises Maryse and plugs Miz and Mrs. but here’s Bryan to interrupt.

Bryan calls Miz a coward over and over again as Miz hides behind Maryse. It doesn’t matter what Bryan calls him because the record books will always say that Miz got the win at Summerslam. Bryan asks him to shut up for once because Miz is just hiding behind things, like the makeup he’s wearing right now. On Sunday, Bryan got to do what he wanted: expose Miz as a wannabe Hollywood star cosplaying as a wrestler. Maryse tells Bryan to change his name to Daniel Bella but here’s Brie to punch Miz in the face. Miz and Maryse bail and Bryan announces a mixed tag for Hell in a Cell. 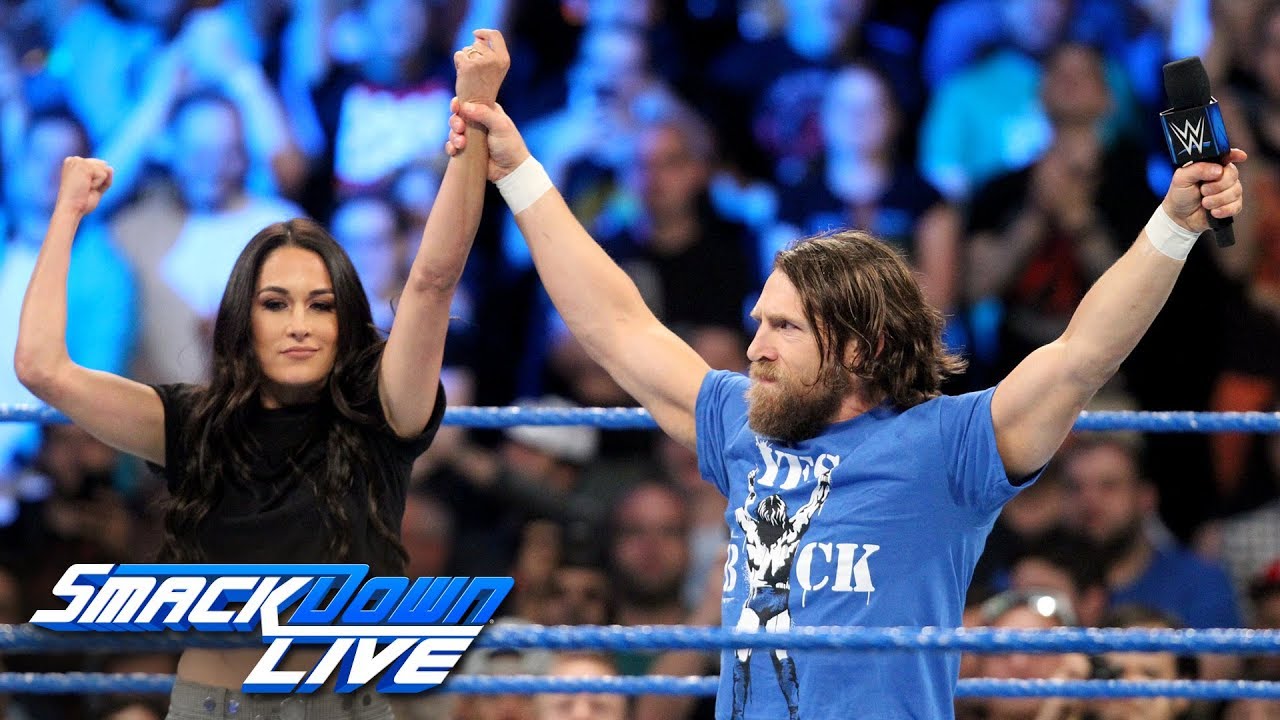 Renee Young brings out AJ for an interview on the platform. AJ isn’t happy with what happened at Summerslam but he wouldn’t change a thing. He has a promise for Joe: the next time Joe mentions his family’s name, he’ll rip Joe’s heart out. Joe trips AJ from behind and pulls him down off the platform for the Koquina Clutch knockout. Joe: “OH WENDY!” AJ can’t come home and tuck in the kids because he’s already gone to sleep. 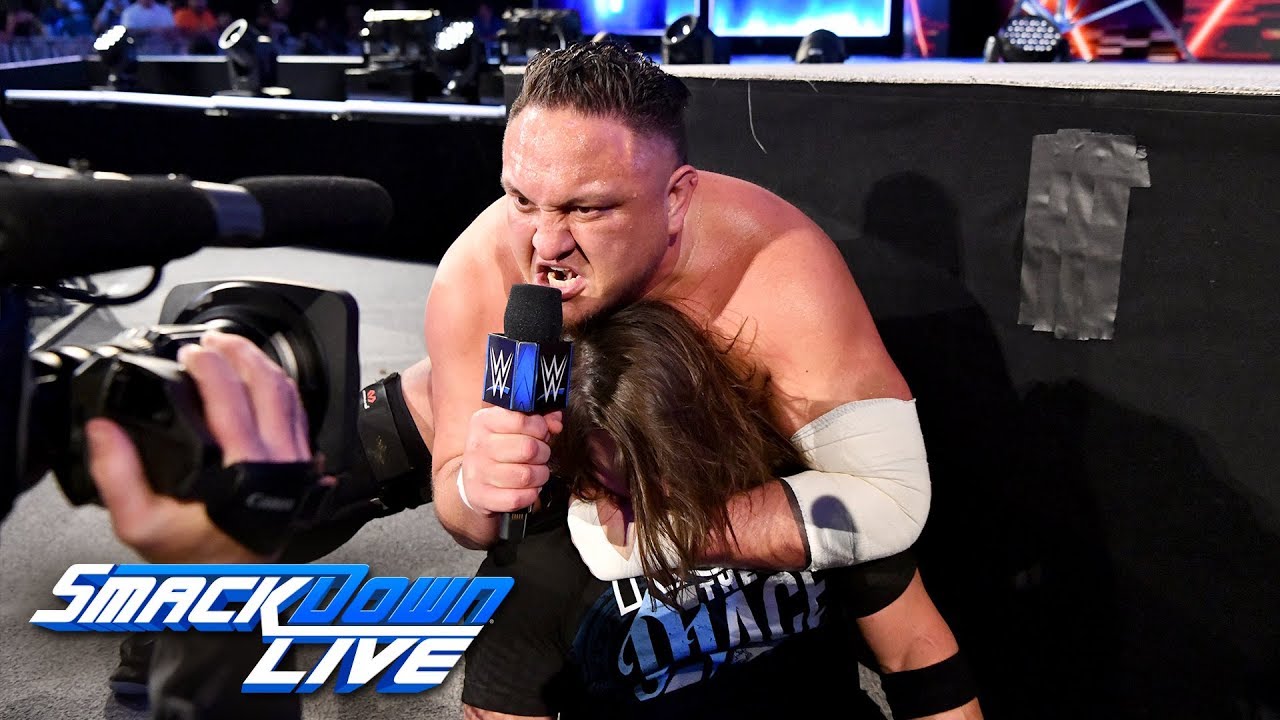 Mojo grabs the rope to get out of an early armbar attempt and we take a very abrupt break. Back with Rhyno fighting out of a chinlock and a collision staggering Mojo. The running shoulder in the corner sets up a belly to belly for two but Mojo chop blocks the knee. A running right hand in the corner sets up the sitout Alabama Slam to finish Rhyno at 6:52 in a match that had a lot clipped out in the middle.

From Raw to wrap things up.

Reigns is defending and runs Balor over to start. Balor does his jump over the top to avoid a charge but gets punched in the face to send us to a break. Back with Balor fighting out of a chinlock and kicking Reigns into the barricade. The running apron kick is broken up and Reigns drops him onto the apron. A hard whip sends Balor into the corner and Reigns yells at him a bit.

Balor takes him down though and scores with the double stomp to the chest. That’s all for the comeback as Reigns takes him into the corner for the clotheslines but Balor knocks him to the floor again. A good looking running flip dive has Reigns in trouble and we take a break. Back with Reigns hitting an uppercut but getting caught by a Pele. Balor gets all fired up and stomps away to put Reigns in trouble. Reigns is right back with a sitout powerbomb for two but the Superman Punch is countered into an Eye of the Hurricane for a very hot two as the fans are completely into this one.

There’s the Sling Blade but the shotgun dropkick is blocked with a Superman Punch for another near fall. The spear is cut off with a knee and Reigns hits…I’m assuming the Superman Punch as the camera was on a fan’s reaction. Cue Strowman before the spear though and there’s another Sling Blade. The Coup de Grace misses though and it’s the spear to retain the title at 19:40.

Post match Strowman is in the ring and kicks Reigns down as the cash-in is…..hang on a second as we’ve got Shield music (and no bell, meaning the cash-in didn’t take place). Cue Rollins and Ambrose in the Shield gear as the fans are VERY pleased. Strowman goes after Reigns but the triple beatdown is on. The trio knocks Strowman outside but he fights off the TripleBomb, only to get speared down. Now the TripleBomb connects to end the show. 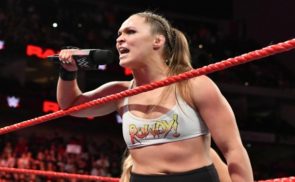 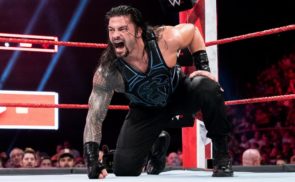 Who Are The Five Biggest Merchandise Sellers In WWE?