The Wrestlemania fallout continues and that means we are on the way to Wrestlemania Backlash because now we have something else called Wrestlemania. I’m not sure how much you can expect from this show, but you can almost guarantee who you are going to see doing it. Let’s get to it.

Tozawa takes him down into a chinlock and then switches over to a headlock. That’s reversed into a cradle so they get back up and run the ropes, with Mansoor dropping down three times in a row. Tozawa eventually trips over him but is right back with a Shining Wizard for two. The backsplash gets the same and, with both of them sitting, they chop it out. It’s Tozawa getting the better of things and grabs a chinlock but Mansoor fights back up with a spinebuster. The DDT gives Mansoor two so Tozawa sends him to the apron, allowing Mansoor to come back with the slingshot neckbreaker for the pin at 5:33.

Here is Roman Reigns, flanked by Jey Uso and Paul Heyman. After looking around for a bit, Reigns has Heyman explain the kind of competition he had to face. Heyman explains who Daniel Bryan and Edge are, allowing Reigns to talk about how no one is on his level. He has done everything he was asked to do and stacked up the competition to pin them both at once. With that out of the way, cut the check and fire up the jet. Reigns goes to leave but here’s Cesaro to interrupt, which gets Reigns’ attention. He leaves anyway as Cesaro stares him down.

Uso sends him into the ropes to start but Cesaro gets in a quick slam to take over. Cesaro takes him to the apron and goes after Cesaro’s hand but gets knocked to the floor. The dive off of the apron drops Uso and we take a break. We come back with Uso work working on the arm to try and keep Cesaro down. Uso goes up but gets caught with a dropkick.

A gutwrench superplex gives Cesaro two and he cartwheels out of an armdrag. Cesaro nails a springboard uppercut and McAfee is rather impressed. Uso is back with a pop up neckbreaker for two but Cesaro nails a discus lariat. The Swing goes on but here is Seth Rollins to jump Cesaro for the DQ at 11:10.

Post match Rollins lays him out and shouts that Cesaro got lucky. The sooner Cesaro figures that out, the better it is for him.

Quick look at Drew McIntyre winning a triple threat to become the new #1 contender to Bobby Lashley but getting laid out by Mace and T-Bar.

Here is Drew McIntyre to get things going. We get a recap of him winning a triple threat match last week to become #1 contender to Bobby Lashley. After the win, he was attacked by Mace and T-Bar, with MVP looking on in approval. With the recap of last week out of the way, McIntyre recaps last week. McIntyre gets to Mace and T-Bar, but he doesn’t believe that they are the masterminds here. That would be MVP, which has McIntyre wondering if Mace and T-Bar are going to start wearing those nice suits.

Cue MVP, who implies he didn’t know anything about it, causing Drew to mock him for suggesting he didn’t know anything about it. MVP says Lashley is expecting McIntyre to be a worthy challenger at Wrestlemania Backlash. As for Mace and T-Bar, Lashley recently decided to downsize the Hurt Business, so why would he need those two after he already beat McIntyre at Wrestlemania? Mace and T-Bar have ZERO affiliation with the Hurt Business. McIntyre doesn’t seem to buy it but here are Mace and T-Bar to jump him again. The double sitout chokeslam drops McIntyre and the two walk past MVP, who doesn’t really respond.

No partner for McIntyre, who charges at T-Bar and hammers away to start. A kick to the face sets up a battle over a suplex with McIntyre pulling it off for two. MVP is watching in the back as Mace comes in to unload on McIntyre in the corner. Some running knees put McIntyre down and we hit the chinlock….and go to a wide shot to show off the Thunderdome for some reason (ala Vince McMahon in the mid 90s pay per views). Mace suplexes him for two but McIntyre hits T-Bar with a spinebuster for two. The Glasgow Kiss slows T-Bar down but Mace’s distraction lets the double teaming begin. The referee throws it out at 5:57.

Result: Drew McIntyre b. Mace/T-Bar via DQ when they double teamed him in the corner (5:57)

Immediately after the bell, here’s Braun Strowman to clear off not Retribution. Load up the tag match.

Strowman powers out of a headlock to start and then runs Mace over with a shoulder. Drew certainly likes that and Braun forearms Mace down. T-Bar comes in and is pounded down into the corner as well. A Mace distraction lets T-Bar get in a chop block though and we hit the reverse chinlock.

T-Bar knees him in the back and grabs another chinlock but Strowman backdrops his way to freedom. The hot tag brings in McIntyre to pick up the pace, including an overhead belly to belly to Mace. There’s a jumping neckbreaker into McIntyre’s nip up….and there goes Mace’s mask. Commentary doesn’t seem to recognize him as a former member of their family, even as McIntyre hits him with the mask for the DQ at 5:24.

Result: Mace/T-Bar b. Braun Strowman/Drew McIntyre via DQ when McIntyre hit Mace with the mask (5:24)

Post match Strowman rips off T-Bar’s mask and knocks him outside as well.

Here are the Street Profits to take part in Bianca Belair’s championship celebration. Back from a break with the Profits talking about how Wrestlemania was a night to remember but there was one match that stood out about the others. We get a video on Belair beating Sasha Banks to win the SmackDown Women’s Title, including the media attention that followed. Montez Ford talks about how special that was and brings out Belair to for the big presentation as champion.

Belair takes her time soaking in a loud EST chant and says she can’t believe she got here. If you told her she would be here with this title….well she probably would have said yes, because that is who she is. You should never apologize for being the b-e-s-t because if you can dream it, you can do it. Then there is Sasha Banks, who pushed her like no one ever has and both of them made history. They both did, but Belair is the champ. The title is for everyone who believed in her and they are just getting started creating history. They all hug but Belair tells Ford to get back to business, because it’s time to get some more gold.

Gran Metalik is here with Lince. They go to the mat to start and get nowhere so let’s have a standoff instead. Gulak takes him down by the leg and grabs a hammerlock. That’s broken up so Gulak takes him down into a chinlock instead. Dorado is back up again and snaps off a running hurricanrana so Gulak plants him with a side slam.

We take a break and come back with commentary explaining that there is a wager on the match: if Gulak wins, he gets $1000 but if he loses, he has to wash the House Party’s laundry.  Anyway, Gulak hits a sitout powerbomb for two and we’re back in the chinlock. Dorado fights up and gets two off a backslide, followed by a Lionsault press for two more. There’s a faceplant for the third two in a row but Gulak electric chair faceplants him into something like an STF. With that broken up, Dorado hits a superkick into the shooting star press for the pin at 10:46.

We recap Charlotte’s return, followed by her costing Asuka a title shot against Rhea Ripley.

Here is Charlotte for a chat. She is tired of the lack of respect from the women’s locker room. Wrestlemania was taken away from her and that just wasn’t fair. She can beat Asuka and Rhea Ripley on the same night, so tonight Asuka is getting taken out as Ripley sees what Charlotte can do.

Cue Asuka and Ripley, with the latter being willing to take Charlotte up on her offer, even though Asuka is beating her tonight. Asuka goes to say something but Charlotte cuts her off and condescendingly reminds her of the Wrestlemania match. Asuka promises to beat her tonight, “b****”.

Rhea Ripley comes out to watch as Charlotte grabs a headlock. They fall out to the floor in a heap though and it’s off to an early break. Back with Charlotte hammering away but Asuka scores with a knee to the face. A Shining Wizard (leg kick according to Virk) drops Charlotte but what looked like a Codebreaker completely misses. Commentary doesn’t try to hide it as they slug it out from their knees.

Charlotte is up with a spear for two and then heads to the apron. Asuka’s kick to the ribs is blocked and Charlotte wrenches on the knee as long as she can. Back in and the Asuka Lock sends Charlotte to the ropes so she takes Asuka’s bad leg out again. The Figure Eight goes on but Ripley breaks it up, meaning the fight is on. Asuka kicks Charlotte in the arm and crucifixes her for the pin at 9:16, though Charlotte’s shoulder was a bit off the mat.

Post match Charlotte yells at the referee and beats him down, even continuing as other referees come out to yell at her. 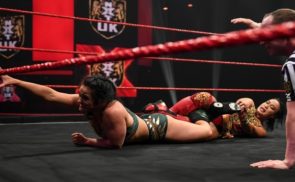