We’re almost up to Wrestlemania and that means we might be for even bigger highlight collections than usual around here. Odds are that won’t be the case, but it would make more sense in this situation. Either way, it’s time to have the finest lower midcarders who aren’t going to make it to Monday Night Raw that you can find. Let’s get to it.

We are hearing more and more about Mansoor’s undefeated streak. Garza grabs a waistlock to start but Mansoor grinds away on a headlock. They fight over a top wristlock with both of them bridging up in an impressive display. A springboard flying mare gets Mansoor out of trouble and it’s right back to the armbar.

We recap Daniel Bryan having Roman Reigns beaten until Edge broke it up.

Here is Daniel Bryan with a chair to get things going (now complete with an info graphic saying “actually made Roman Reigns tap out at Fastlane”). Bryan talks about how everyone saw Reigns tap at Fastlane, even though Reigns said he would rather die than tap. Then Edge hit him in the back with a steel chair because Edge thinks everyone should let us see the Edge vs. Roman Reigns dream match.

Bryan is tired of everyone having a dream match but him, so he is willing to earn everything again. He wants Roman Reigns for the Universal Title tonight and is sitting right here until he gets his shot. Post break, Bryan is still sitting in the ring and after a recap of what he said before the break, here is Adam Pearce to say the referee’s decision is final. Reigns is still the Universal Champion and his next title defense will be against Edge at WrestleMania.

Bryan understands and says he can face the winner immediately after Reigns vs. Edge is over. Pearce says no and Bryan calls him out for the double standard. How about this: Edge vs. Reigns on the first night and Bryan vs. the winner on second night? Cue Edge to say every match he wrestles could be his last one and he is sick of hearing from Bryan after Bryan last twice. The fight is on and Edge hits a quick spear before unloading with the chair. Edge stares a lot and egads don’t go to a closeup of him these days.

Here’s Adam Pearce for the big decision. Roman Reigns, Edge and Daniel Bryan join him and Pearce gets to the point: Reigns will defend the title once at Wrestlemania and it will be in a triple threat match. Then we cut to an ad for the FOX 10pm news and come back with Edge down and Reigns hammering on Bryan.

Jey Uso throws in a chair but Edge spears him down and beats up the other two. Edge lays them out with the chair and drops the agents for trying to break up the Conchairto. The distraction lets Bryan escape so Edge has a seat in the middle of the ring to end the show.

We look at Drew McIntyre beating the Hurt Business to ban them from ringside at Wrestlemania.

We look at Bobby Lashley breaking up the Hurt Business.

Non-title and Cedric Alexander is here with Benjamin. Shelton wrestles him to the mat to start but Lashley powers up and hammers away. Lashley sends him outside for a hard posting, followed by a running shoulder in the corner back inside. Hold on though as Lashley has to chase Alexander up the ramp. The distraction lets Shelton hit Paydirt for two, followed by a running knee in the corner. Lashley shrugs it off and hits a pair of spinebusters into the Hurt Lock for the win at 4:13.

It’s time for Alexa’s Playground with Bliss looking at a Jack in the Box. They used to be called the Devil in the Box and could only be opened once they were weakened. That is what happened to the Fiend at Wrestlemania and Randy Orton believed that the Fiend was gone forever. The Fiend was really just weakened and trapped inside Bliss’ Fiend in a Box. Now Fiend is looking forward to Wrestlemania, because the Legend Killer dies. She turns the crank on the box and a Fiend figure pops up….and the real Fiend is sitting beside her.

They fight over a lockup to start until Carrillo jumps over him in the corner. A dropkick looks to set up a suplex but Gulak snaps the throat across the top. Gulak goes up but gets Spanish Flied down for two as we take a break. Back with Carrillo hitting a side slam for two and grabbing an armbar. Gulak pulls him down by the arm though and hits a dropkick to the same arm.

With that not working, Gulak switches to an ankle lock and then the STF. Carrillo grabs a rope so Gulak puts him on top, only to have Carrillo spin onto him into a crossbody for two. Gulak is back up and tries an O’Connor roll but Carrillo blocks and immaterial springboard up for a spinning headbutt. The cover is countered into a choke They trade rollups for two each, followed by Gulak hitting a Jackhammer for two. Gulak tries la majistral but Carrillo counters the rollup for the pin at 11:04.

We look at Drew McIntyre running through Ricochet and Mustafa Ali.

Post match McIntyre calls out Lashley and, after we cut to a nervous looking MVP, here he is. Post break, McIntyre says he didn’t even notice MVP behind him and now it is time to fight. The brawl is on with Lashley being knocked to the floor. Cue King Corbin to jump McIntyre from behind and lay him out until McIntyre manages a belly to belly. The Claymore is countered into Deep Six, allowing Lashley to put on the Hurt Lock. Lashley does it two more times to really hammer the point home and leave McIntyre laying. 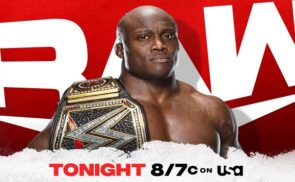 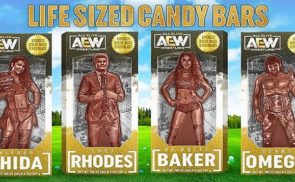