It’s tournament time, which isn’t the best description in the world around here. This time around it’s the start of the Cueto Cup, with the winner getting a Lucha Underground Title shot at Ultima Lucha Tres. Tonight we have first round matches, which could eat up a good chunk of time in a thirty two person tournament. Let’s get to it.

We open with a recap of Dario Cueto’s announcements last week, as well as Drago turning on his partners to join the villains. There’s also a clip of the Black Lotus Tribe destroying Pentagon Dark from several months ago.

Pentagon comes in to see Dario, who has a bracket board in his office. Dario doesn’t think much of him being back but Pentagon goes after the arm, earning himself a spot in the tournament. Before leaving, Pentagon promises to break some bones if he doesn’t win something at Ultima Lucha.

Cueto Cup First Round: Mala Suerte vs. The Mack

They flip around to start with Mack grabbing an armdrag. The fast pace continues until a standoff but Suerte stops to pose instead of following up. Suerte’s chops have no effect so Mack Samoan drops him for two. A hurricanrana takes Mack down for a basement dropkick and some arm waving.

That just seems to tick Mack off as he grabs an exploder suplex for two more. Suerte’s release German suplex sends Mack flying and Mala heads up top, despite Mack being 90% of the way across the ring. Instead of jumping though, Mala drops down and runs across the ring for a backsplash.  Suerte misses a Swanton though and the Stunner advances Mack at 7:31.

Cage, still wearing the gauntlet (which is still shooting electricity), is lifting when Dario comes in. The boss thinks Cage should meet Councilman Delgado but Cage doesn’t seem interested. Dario insists though.

Argenis tries to handspring off the ropes and gets dropkicked in the mask for his efforts. Pentagon takes the knee out and it’s one sided to start. A hurricanrana drops Pentagon but he kicks Argenis in the head to take over again. An exchange of superkicks goes to Pentagon but Argenis is able to take him outside. That’s about it for his offense at the moment though as Pentagon kicks him in the face a third time. Argenis gets two off a neckbreaker, only to get suplexed into the corner. The pumphandle driver gives Pentagon two so it’s a package piledriver to put Argenis away at 5:44.

Cueto Cup First Round: Famous B. vs. Texano

B. yells at Melissa Santos for not introducing him from Texas. He needs a stud like Texano in his stable so he’s willing to let Texano get an uncontested pin. B. lays down but Texano picks him up at two, setting up a sitout powerbomb for the pin at 25 seconds.

Video on Rey Mysterio getting ready to challenge Johnny Mundo for the Lucha Underground Title.

Striker reminds us of their best of five series and when you add in following matches, they’re 3-3 against each other. Drago is now in red and on Kobra Moon’s leash.  Aerostar offers a handshake to start but Drago won’t do it. With Aerostar’s back turned, Drago hesitates to hit him but a smile from Moon turns him more evil and Aerostar is in trouble to start.  Aerostar grabs a drop toehold to send him into the middle buckle, only to eat a dropkick. A hurricanrana and kick to the head stagger Drago but he catches a springboard in a cutter for two.

They look at each other for a second and again, Drago doesn’t seem to want to do this. Aerostar hits a suicide dive to send Drago into the stairs but bangs himself up even worse at the same time. Some cheap shots from Moon keep Aerostar down and Drago fires off some more kicks. Aerostar is right back with a modified Texas Cloverleaf while laying on his back with a bodyscissors around Drago’s ribs. It’s broken in just a few seconds as Drago comes right back with the Dragon’s Tail for the pin at 7:26.

Drago lays Aerostar out after the match, again at Moon’s wishes.

Cage goes to City Hall where Councilman Delgado promises Cage more power as their work begins. Cage then chokes Delgado against a wall….and PUNCHES HIS FACE IN, apparently murdering the Councilman because Cage is a machine and not a man. 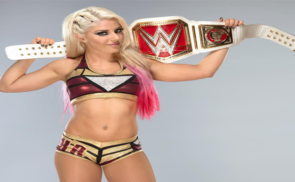 Alexa Bliss on the Draft, Her Position, What Is Next for Her 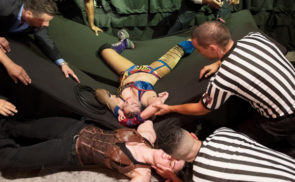