Change of call. Commentary is one of the most important parts of any wrestling show as the commentary team is your guide for the night. They are there to tell you what is going on, why you should care and what matters with everything you are watching. That can be easier said than done in a lot of cases, so finding the right lineup matters. AEW seems to be shaking things up a bit.

According to Wrestling Observer Radio, AEW will be changing the commentary lineup around. Jim Ross will now be calling Rampage, which also calling the second hour of Dynamite. That was the case this week, as Ross will be calling Rampage while also calling the Blood & Guts match, which took up the second half of Dynamite this week. There is no word on why AEW made the change.

Opinion: This is something that makes a bit of sense, as Ross is in a place where he can be more effective in spurts rather than calling the whole show. Maybe the break in between for him helps as well, though it is still the same amount of work either way. Hopefully he likes the chance of pace, as Ross can be a valuable asset to AEW if everything is actually set up properly.

What do you think of the change? Who is the best AEW commentary team? Let us know in the comments below. 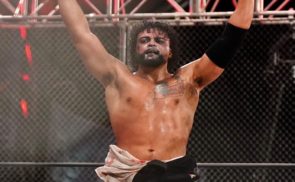 Homecoming: WWE Hall Of Famer Returns To Company After Long Recovery From Surgery