That’s what’s next. We are less than a month away from Survivor Series and that means that things are going to start getting interesting. This year’s show is a little bit different though as we are only about a month removed from the 2020 WWE Draft. The annual event shook up the way WWE looked and worked and that will be the case for some time to come. It is also going to shake things up when it comes to Survivor Series and now we are going to see which way the show is going to go.

One of the biggest questions going into Survivor Series is the lineup for the Monday Night Raw men’s elimination match. Normally this would be easy to figure out but with the shows being changed around so much last month, there are only so many things that can be figured out. Now though, we might have an idea of who is going to figure out who will be filling out the teams.

According to the Wrestling Observer Newsletter, there is one name likely to fill out the Monday Night Raw team and a group available to fill out the SmackDown team. Drew McIntyre is the most likely choice to complete the Monday Night Raw team and was teased as doing so during this week’s show. The team already consists of AJ Styles, Keith Lee, Sheamus and Braun Strowman. On SmackDown, the three options are likely to be filled by some combination of Big E., Otis, Seth Rollins, Lars Sullivan, Rey Mysterio and Murphy. Kevin Owens and Jey Uso have already qualified.

Those are some strong options. Check out who is available:

Opinion: This is about as logical of a choice as you have at the moment, as there are only so many people available to fill in both teams. The match is starting to take shape and we are likely to see some more names being announced in the near future. There are some interesting options out there and some of these choices could make for some rather good looking combinations.

Who do you want to see in the match? Who will be involved? Let us know in the comments below. 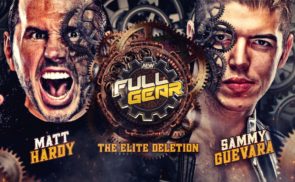