KB’s Review: You Should Be In The Hall Of Fame

We’re about two and a half months away from WrestleMania 35 and the card….well it’s not really clear yet but that should be remedied this Sunday at the Royal Rumble. However, there’s a lot more to WrestleMania weekend than just WrestleMania. In addition to NXT Takeover, the Monday Night Raw and SmackDown Live that follow, there’s the Hall of Fame, on which your individual take may vary.

The WWE Hall of Fame may not be perfect (or even anything close to it) but it’s fun to see who WWE puts in there every single year. That makes for some interesting discussions with some people never being able to understand why someone gets in while others see it completely clearly. While some of the picks are indeed head scratching, that makes for some fun times.

Today we’re going to take a look at who I would put into the Hall of Fame this year. Note that I’m not saying these people all will get in or will get close to getting in or that a lot of people would agree with it, but these are the names I would induct. Some of these might be for the sake of deserving it, but others would just be entertaining either from the idea of seeing them inducted or their induction speeches, many of which can be highly amusing, assuming they ever end.

For the sake of simplicity, I’ll go with a pretty simple structure for setting up my list. WWE tends to go with something like this so I won’t stray too far from it. We’ll be going with the following:

For the sake of sanity I’ll leave off the Warrior Award and Legacy inductees.

This is one where I can’t understand how it hasn’t already happened. Back in the 1980s, Lauper was a young pop star who jumped into wrestling thanks to Captain Lou Albano. Without going into the history, Lauper got in a feud with Roddy Piper and needed some help. She got Hulk Hogan on her side which eventually led to the first ever Wrestlemania. Wouldn’t that be enough to get a spot in the Hall of Fame?

This one helped start it all: 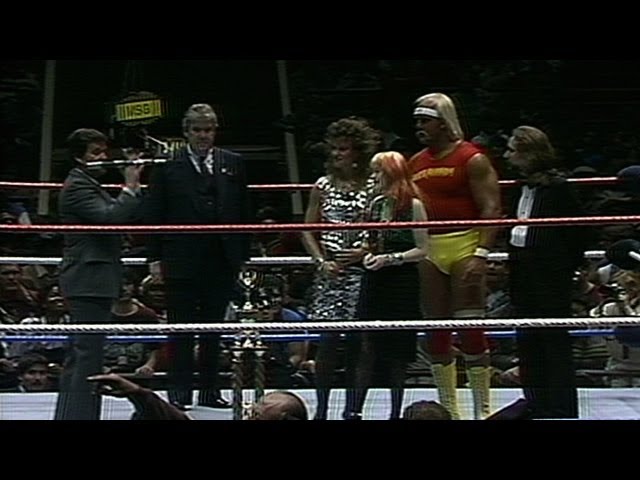 Lauper brought the cool credibility to the wrestling business and that’s the kind of thing that wrestling needed. You can’t get very far without something that brings you out of the small arenas and rock music was the kind of thing to get you there. Lauper was cool, and that helped things move forward. Wrestling exploded onto the mainstream and while Hulk Hogan was the boulder that came down the cliff to run everything over, Lauper was the one who gave wrestling a big push.

I know there are some issues here but COME ON already. New Day broke their record for longest title reign in history and that took about thirty years to finally accomplish. Demolition was the most dominant tag team of the late 1980s and managed to turn themselves from what was pretty clearly a Road Warriors clone into a unique team who beat the heck out of a lot of people.

What other team could make a fight look this good: 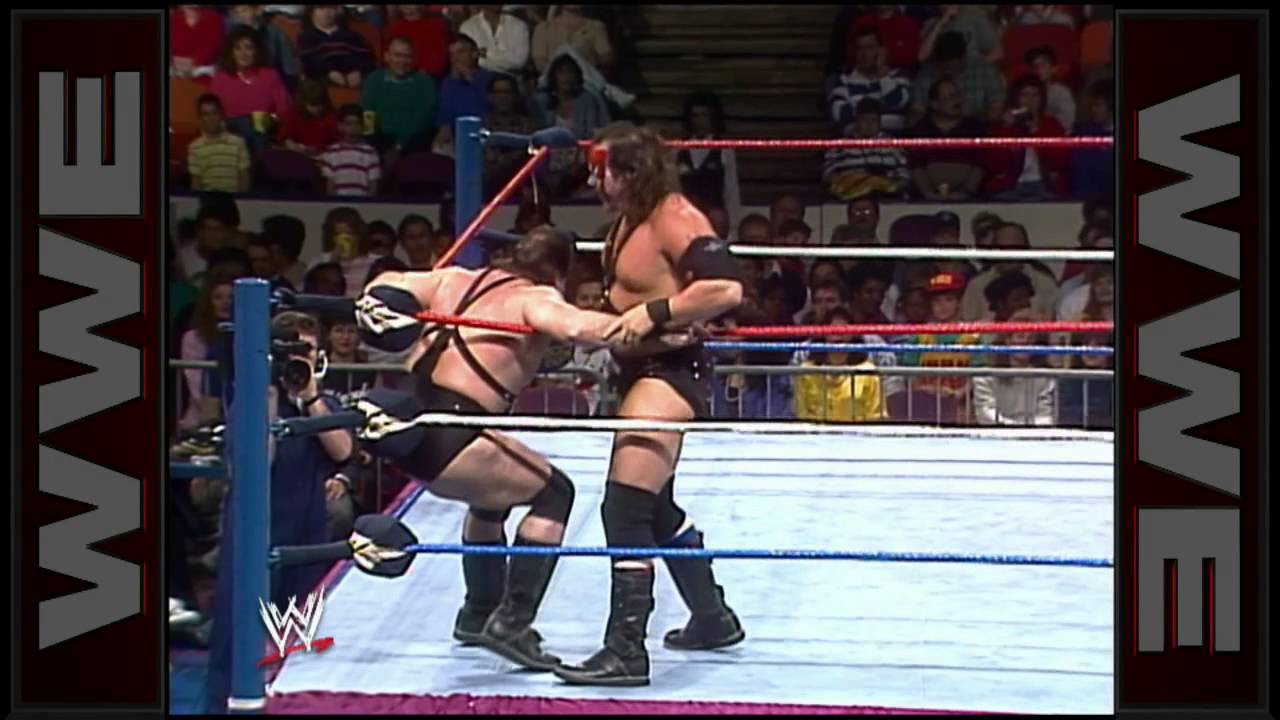 No matter what issues they have with WWE, there comes a point where they just belong in the Hall of Fame. Demolition is one of the most successful and coolest teams ever and it would be great just to hear Barry Darsow make jokes about his old gimmicks. You could make a case for the team being Hall of Famers even if you cut their career in half. Does anything else really need to be said?

Much like Demolition, COME ON already. This is one of those gimmicks where you shake your head and ask “Really?” but then wind up being impressed when it’s one of the most recognizable of all time. Honky Tonk Man managed to turn a stupid gimmick (seriously, he’s an Elvis impersonator) into something that has lasted almost thirty five years, to the point where he still kicks around the indy circuit today.

The pop here makes the long reign worth it: 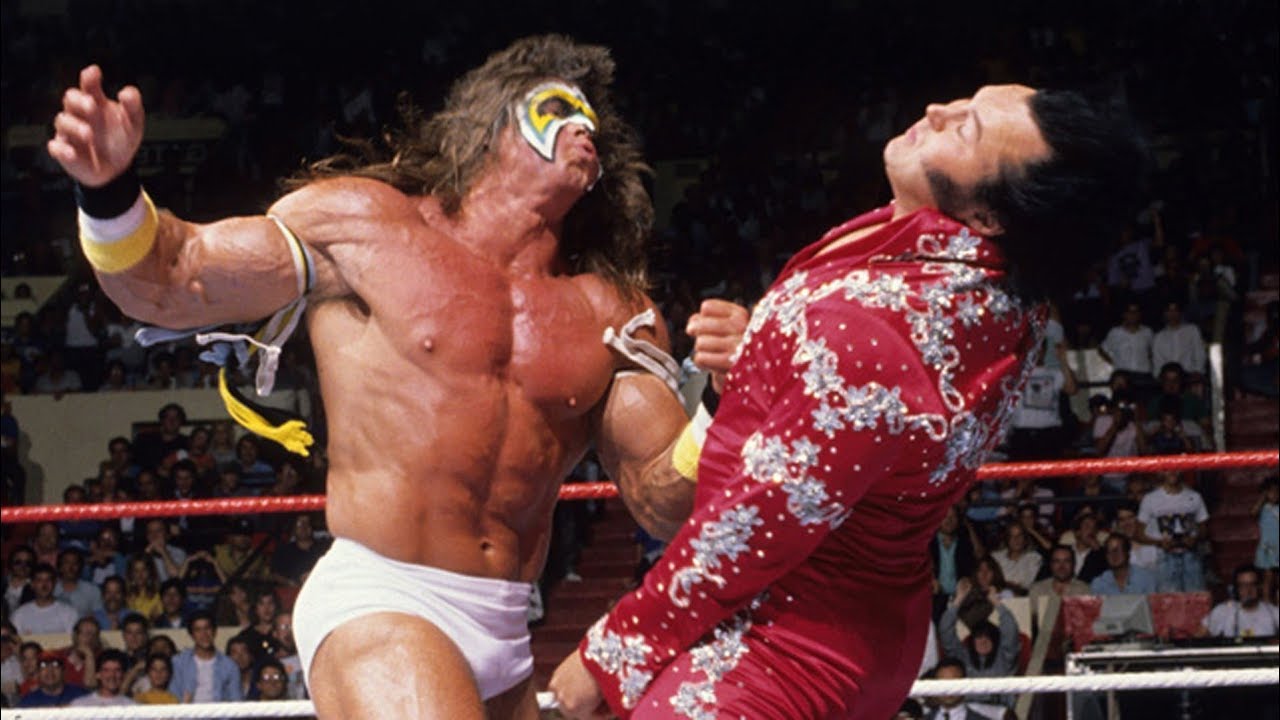 The interesting thing with Honky Tonk Man is he had one major claim to fame but he RAN with that thing and is still referred to as (partially joking but still) the greatest Intercontinental Heavyweight Champion of all time. That reign is still easily the longest by far with nothing even approaching it (the longest reign since was about six months shy), which is quite the mark for someone with such a simple idea. Give this guy the spot that he earned a long time ago.

Ok so I’m really, really stretching with calling Vader an upper midcarder here but it’s the only place he would fit. Vader was a different kind of monster and one of the scariest people you’ll ever see in a wrestling ring. His matches and feud with Sting are legendary and that’s just the kind of good thing that he did in the United States. There are few people with his kind of resume and skill and, poor WWF run aside (not all his fault), Vader not being in the Hall of Fame is laughable.

It’s one of my all time favorite matches: 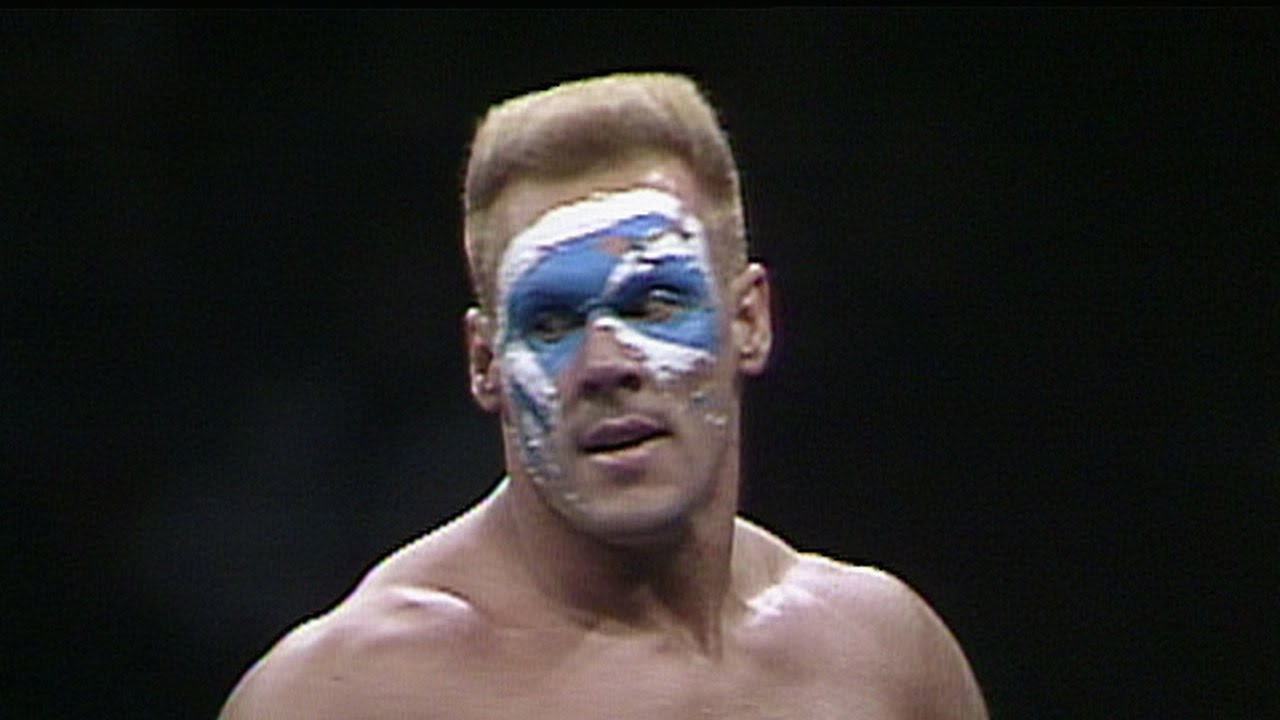 Vader is one of those guys where you just get it. How many times have you seen someone who can move well for their big size and thought of Vader? That’s one of the signs that someone is influential and it’s certainly the case with Vader. He set up a lot of people on the road towards being the athletic big man, though few have ever come close to his level because he really was that great.

It was her or Victoria but it’s hard to root against Holly because she’s just so nice. There’s a not very well known story of Holly actually paying money out of her own pocket to pay for Beth Phoenix’s wrestling training because she saw so much potential there. Who else is going to do something like that while also being as skilled as she was herself? That kind of thing alone should get her some recognition.

This is a heck of a story: 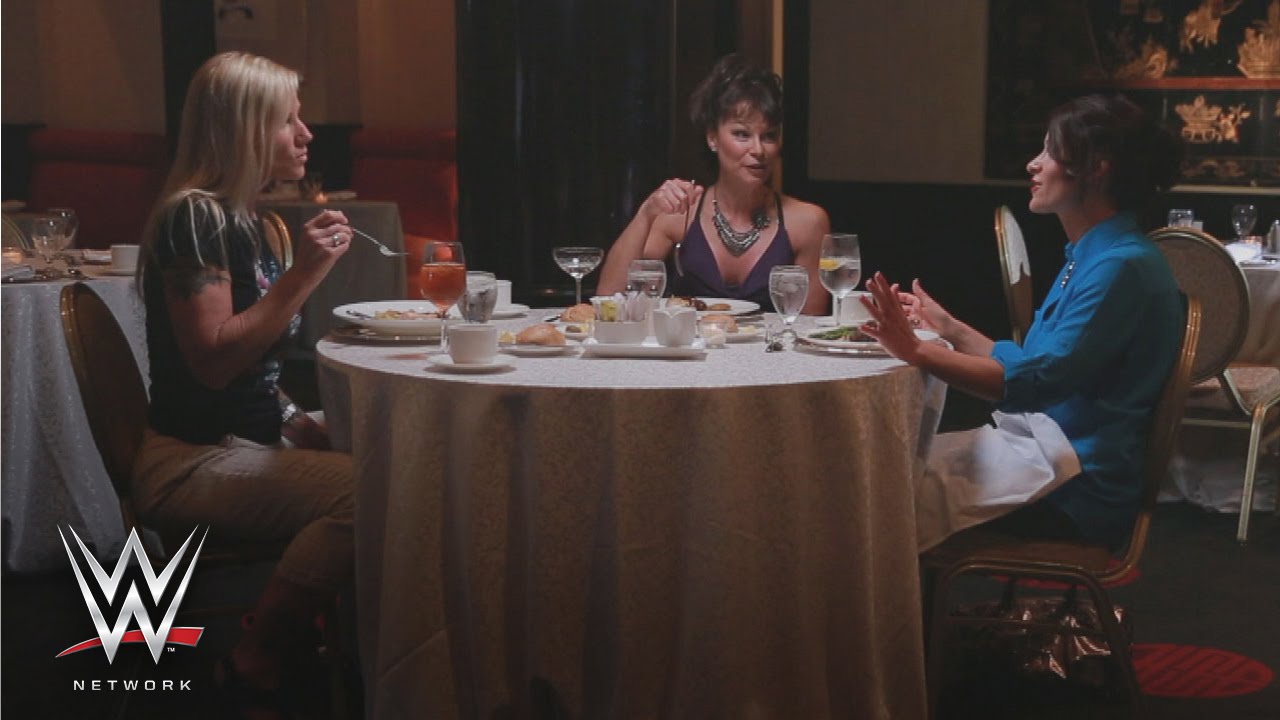 WWE Network: Molly Holly reveals the lengths she was willing to go to compete at WrestleMania

What impresses me the most about Holly is how well she succeeded without being your traditional female wrestler. While very pretty and in great shape, she was never considered one of the gorgeous Divas, which led to some VERY disturbing angles involving her looks and physique. They were downright cruel most of the time and yet Holly made them work anyway. As a bonus, it was her idea to have her head shaved at Wrestlemania XX because she wanted on the card that badly. That’s some serious dedication.

For the speech alone man. Cornette has the gift of gab like almost no one else in wrestling history and the stories that he can tell are second to absolutely no one. Unlike some of the other names on here, Cornette doesn’t have a lot of top level people acting like him because no one can actually act like him. He truly is one of a kind and that’s something that few can truly say. 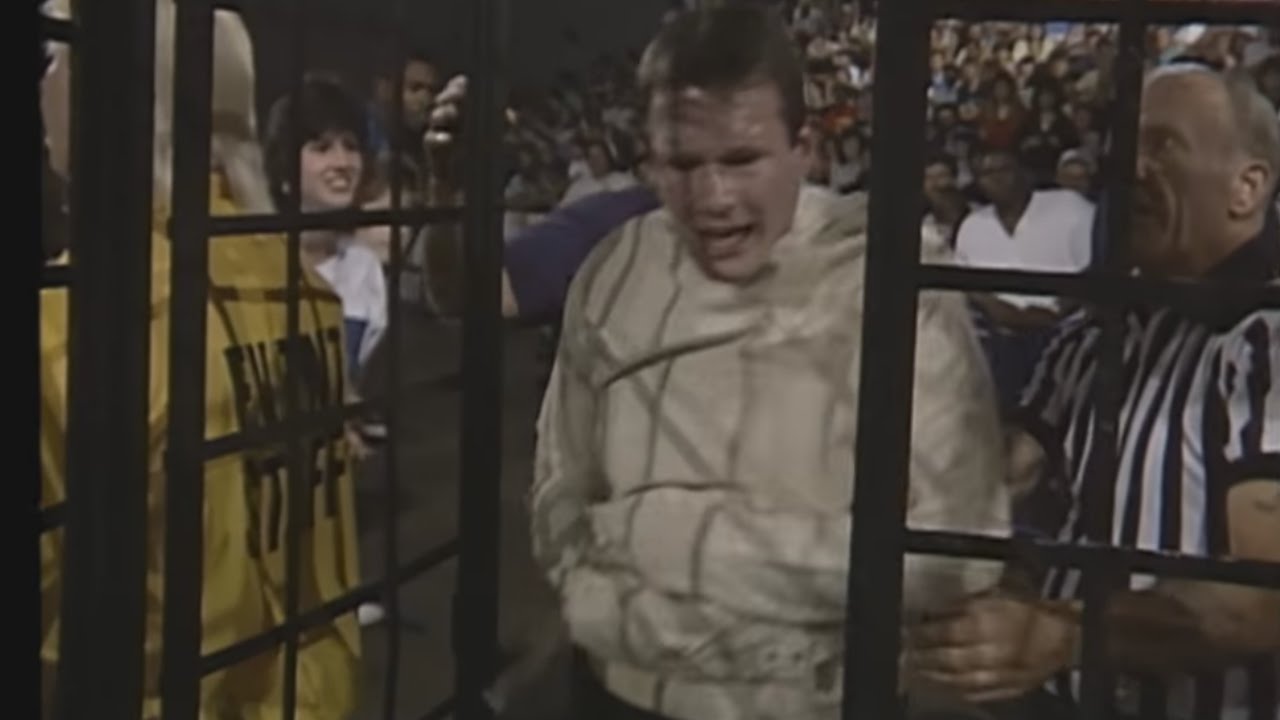 Jim Cornette is suspended above the ring in a cage: Great American Bash 1988

Like I said though, this is all about the speech as Cornette isn’t a fan of WWE and his speech could go on forever, though the little gems in there to go along with the history that Cornette would include would be more than worth it. I’ve been a big Cornette fan for a long time now and while I know he’s one of the best managers of all time, it would be nice to see the biggest wrestling company in the world give him the acknowledgment.

Now I know this one isn’t happening anytime soon because McMahon won’t let it. When he’s gone though, there needs to be a full wing dedicated to him (there also needs to be a building but you get the idea) as no one has meant more to wrestling (at least modern wrestling) than McMahon. I know he’s getting older and isn’t as sharp as he once was, but who changed wrestling like he did and made as much money at it?

What else is there to say: 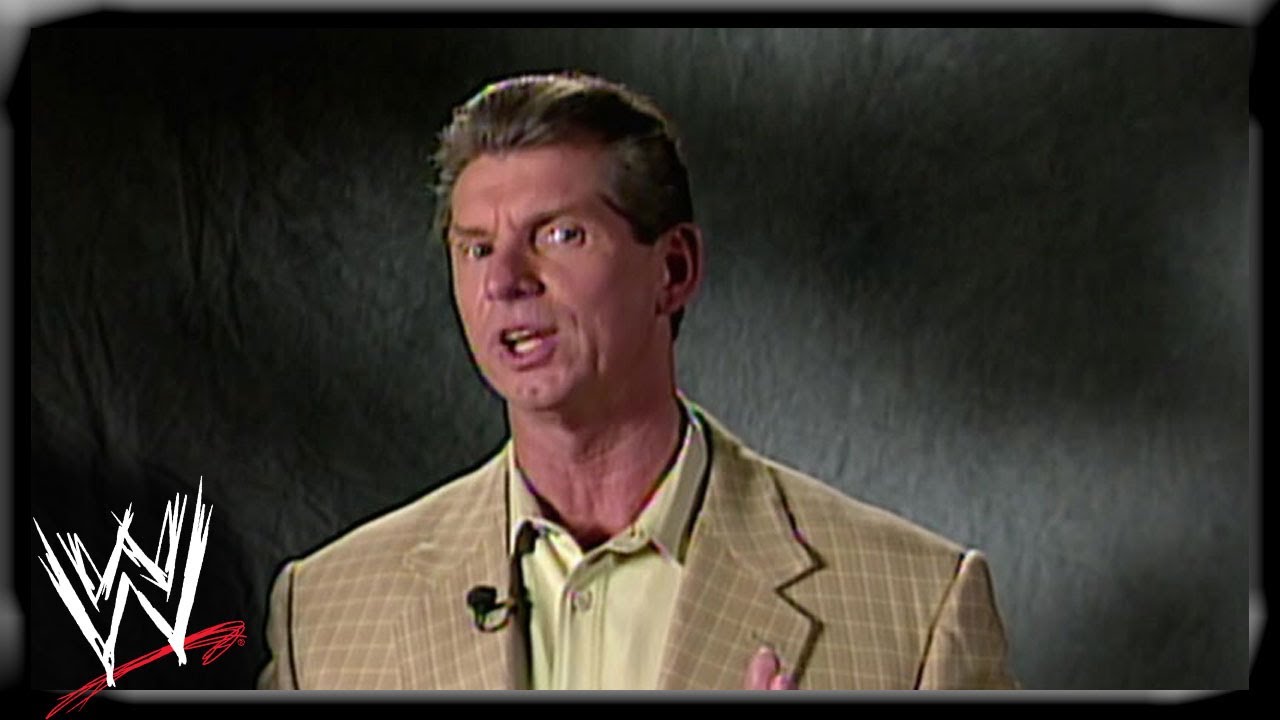 At the end of the day, no one is on McMahon’s level and really, no one is close. He changed wrestling forever and gave us so much of the spot we know and love. While the entire company is his, that doesn’t mean he doesn’t deserve something like this. I have no idea what the speech would be like, but I know the ovation leading up to it would be the longest of all time.

I know the Hall of Fame is a joke and not the best thing in the world, but it’s still a fun place to go to look back at some history. That’s the point of the whole thing and some of the videos and tributes that WWE does in the build are highlights of their entire year. Get these people in, as all of them deserve the attention more than most. 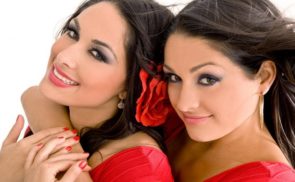 Rumor: WWE Legend “A Lock” For Hall Of Fame