So I had a column set up about the upcoming Summerslam title matches and how WWE doesn’t have much of a choice but to do a series of rematches. Odds are you’ll see that one in the future, but the wrestling world being turned upside down. After forty plus years of being in charge, Vince McMahon officially retired from WWE and has handed control over to his daughter Stephanie McMahon and Nick Khan. Yeah I think that might be a bit more important than anything happening at Summerslam with its big package of rematches (more on that later)

This is the kind of thing that you always knew was going to happen at some point but it’s hard to actually believe it went down. Vince has been the force in WWE and the idea of anyone being in charge of the company is almost impossible to fathom. There is no way to put together Vince’s legacy into anything shorter than a rather long book so this week we’re going to look at some of the high points of his career and what this change might mean for modern WWE.

Where do you start? First and foremost, we’re officially in uncharted waters. Vince has run WWE since before a lot of us have even been watching wrestling. The company itself may have had another boss way back in the day, but that wasn’t exactly the WWE that we are seeing today. Vince has been there throughout the entire ride from the New York territory to the king of the wrestling industry.

I know Vince has lost a lot (that’s an understatement) of what made him great and he has made some terrible decisions, but at the end of the day, he has been there the entire time and no one else knows what it is like to run a wrestling promotion like this. Who do you get to take over his spot and hope that it works well? Maybe Stephanie and Khan can pull it off, but this isn’t going to be the same thing that we have been seeing for the better part of ever and that is a huge change of pace.

Some of that change could include getting rid of some of Vince’s, shall we say, quirks. There have been all kinds of annoying things that are often attributed to Vince that leave fans wondering what they are seeing, and now a lot of those might be going away. It might be nice to not hear “medical facility” or “WWE Universe” every so often. If nothing else, maybe we see something like Theory getting his Austin back (among other possible name changes). Those are the things that I don’t think anyone but Vince ever understood so changes could be underfoot.

Another change we might be seeing is a loss of rematches. One of the things that Vince is known for is ripping up the scripts for Monday Night Raw and SmackDown and rewriting everything, often with matches that we had seen fairly recently. I don’t know how much of that is due to Vince, but maybe some fresh blood can shake things up a bit and we can see some matches that we haven’t seen over and over again.

One more change that might take place is a loosening up of the scripted material on television. That has long since been a sticking point for Vince and a lot of it has been a major problem. While I doubt you are going to be hearing worked shoots all over the place from one week to another, we might be getting some of the wrestlers talking like humans instead of….whatever Vince has turned them into.

Now it might sound like all I want to do is talk about changes that we might be seeing with Vince gone. While that is the case in a lot of these instances, there is another side to this whole situation that needs to be addressed because there isn’t much of a way around it. The future of WWE might be looking a little shaky, but there is also Vince’s legacy to consider and that is a massive one.

There are a lot of people who can’t stand Vince and I can understand that. He took professional wrestling and completely reshaped it into his vision of what the industry should look like. That has run off a lot of fans and rubbed a lot of people the wrong way, which is entirely understandable. The wrestling that we watch today is almost nothing like what it was just twenty years ago, with quite the one size fits all approach. Look at what AEW has done in just a few short years by presenting itself as something other than what you get with WWE.

Here’s the thing though, and there really isn’t much of a way around it: there is no telling what wrestling is like today without Vince. While someone would have eventually come up with the idea of taking everything national and cable television would have gotten rid of the territory system, how well would it have gone with anyone else? You can say that anyone could do what Vince did and make it work, but Vince is the only person who ever actually did it. That is the kind of thing that you can’t replace or reverse and there is absolutely no telling what kind of wrestling we are seeing today if ANYONE else has tried to do what Vince did.

Would anyone else have realized the value in the Rock N Wrestling Connection? The Attitude Era? Seen the value in people like Steve Austin, Hulk Hogan, The Rock or the Undertaker? I’m sure someone would have, but would they have pushed them to the moon as Vince did? Maybe or maybe not, but one thing is certain: Vince pushed the right buttons to become the king of wrestling and no one is going to come close to what he did for a very long time.

One thing that we will not be seeing is someone as great of a natural performer running the company. In his day, Vince was the best heel in the world and someone who has been imitated many times to little avail. Vince vs. Austin is one of those feuds that could only work with Vince himself in the role and that is the case for one very specific reason that only Vince can do.

One of the things that you could always say about Vince is that you knew something was going to happen when he was around. As the boss, there was no one for Vince to answer to and that meant he could do something in the blink of an eye. When that music hit, the question wasn’t would something happen, but rather what was Vince going to do at the moment. That isn’t something you can fake with a General Manager or an authority figure because the authenticity isn’t there. Vince was one of a kind in that case and I don’t know if Khan is going to be around in Vince’s place.

No matter what you think of him, there is no way to replace Vince, which may or may not be the worst thing. Vince is the definition of one of a kind and I have no idea what we are going to be seeing now that he is gone (assuming he is A, gone and/or B, not coming back at some point). We now get to go into a completely different universe that we haven’t seen in decades. That could be a good or a bad thing, but it is the place that we are going now and it should be interesting, one way or another. Vince has run wrestling for so long and now the question is what that means. As for wrestling ever being the same though? No chance. 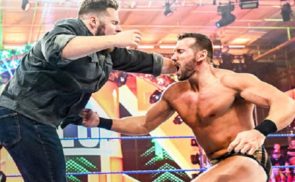