I don’t think I’m breaking any new ground when I say that WWE is not exactly on fire at the moment. WWE television has all kinds of problems with almost nothing positive going on a lot of the time. There are always going to be a couple of things that work out, and there is a reason for that: the wrestlers themselves. That is what we are going to be looking at today, because it is something that is forgotten far too often.

There are all kinds of problems with WWE these days, but the vast majority of them come down to the company’s creative decisions. You will see stories taking place in WWE that Steve Austin and the Rock could not make work at the height of their powers. Do you think Trish Stratus and Lita could get a story over a doll with evil powers over? What about Dusty Rhodes having to say the most ridiculous words ever uttered on wrestling television every week? Those people are talented, but their abilities do have a limit, which they have hit on a regular basis.

One thing that is often forgotten (including by myself) is that the WWE has a very, very talented roster. You’ve seen these people do great things elsewhere, be it in Ring of Honor, on the independent scene, or just in NXT, so it isn’t like they don’t know how to do great things. They aren’t going to forget everything that they know as soon as they make Monday Night Raw or SmackDown, but for some reason you do not see a lot of their talents on display. That’s why it was nice to get a refresher course in just how good WWE’s wrestlers really could be.

On Sunday night, I took in a WWE house show at Rupp Arena in Lexington, Kentucky. This was my second such show in about two and a half months and both times I have seen the same thing: a bunch of talented wrestlers who got to go in front of a crowd and showcase their extensive talents. It’s a completely different world when the television cameras aren’t around and you really do get to see what the wrestlers can do. There were a few moments that stood out to me and that is what we are going to look at today.

The opening match saw Seth Rollins challenging King Nakamura for the Intercontinental Championship. On paper alone, this should be rather good, but you do not get to see the best part of these guys very often. Rollins does not have the best reputation due to some of the characters he has been using and Nakamura has rarely gotten to showcase the talent that he has. I was interested in seeing the match because of who was in there, but it wound up being even better because of the extra stuff you get to see in this kind of different setting.

As you would often see back in the day, there was a good bit of stalling to start, including with Rick Boogs playing the guitar and both Rollins and Nakamura messing around with Rollins’ coat. It was a bunch of little things like Nakamura stealing the coat and dancing around, with Rollins losing his mind as you probably expect before they got around to the regular match.

During the middle of the match though, there was a sequence that caught my attention. You’re probably familiar with Nakamura’s “COME ON” spot (though it feels like forever since he has used it on television) and it is something that only he can do. He used it here as well, giving us the following sequence:

That’s it. That’s the spot that got me invested in the match, just because it felt like something different. This isn’t the kind of thing that you’re going to see on television because it isn’t completely scripted out and was there to draw some interest from the live crowd. What made it work was that it felt like something these two would do, while also feeling like something where one of them said “wouldn’t it be funny if” and they went from there. That is a place where WWE is completely lost most of the time and sometimes it can be one of the best ways to get a crowd invested.

The other person who caught my attention at the show, believe it or not, was Carmella. I know she gets attention for a variety of reasons, but Carmella is a heck of a lot better at her in-ring, or at least in-arena, work than she is given credit for being. That was on display this week, and it was all because of….a fan suggesting that Carmella was a bird.

One of the matches at the show was Carmella facing Liv Morgan. It was the usual stuff, with Carmella saying that she was gorgeous and Liv Morgan (as well as the rest of the crowd) just wasn’t. That’s about as easy of an idea as you have, while not exactly inspired stuff. I’m sure you can imagine the match, which involved Carmella wearing a weird looking mask to protect her face, but something else happened to change the direction of the match.

Shortly after the match got started, a fan called Carmella a chicken. Carmella shouted back at the fan, then ran around the ring as Morgan gave chase. Once Carmella took over, she yelled about not being a chicken and even mocked a chicken dance. Yes it was corny, yes it was silly, yes it is something a four year old might do, and it was one of the most refreshing things I’ve seen in wrestling in a LONG time.

What made this work is that it just happened. A fan said something, Carmella reacted to it and turned it into a thing. It was a small thing mind you, in a match that didn’t get much time and wasn’t very good, but it was SOMETHING. This was was better because they just ran with what the fan said. You could see someone thinking on their feet and rolling instead of being a mindless drone who stuck to the match script no matter what. That is SO nice after all the years of people being scared to death of changing anything and it gave a little (ok a very little) life to a match that didn’t have much going for it otherwise, which helped a lot.

I can’t help but think that these things happened because the people involved knew that no one who mattered in the slightest (read as Vince McMahon and the usual gang of idiots) was ever going to see it (or care). You get the feeling that the pressure was off and the people who had spent a lot of their lives watching wrestling were allowed to have fun and put together something different. Somehow, it worked.

WWE gets a lot of flack these days and that is something I’ve certainly gotten into more than once (a day usually). The problem continues to be behind the scenes most of the time though, as there is only so much you can do when you have no wiggle room whatsoever. There is a lot of talent in WWE and sometimes you get to see that. It’s just that you have to put in some effort and make sure that the bosses aren’t in the house (show). 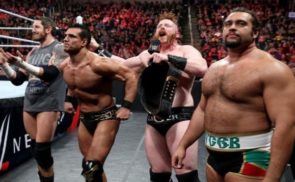