KB’s Review: They Did Something

We are living in a brand new reality in wrestling and that is going to take some getting used to over the next….well years probably. Following the retirement (or forcing out, whichever you prefer) of Vince McMahon, WWE is officially in uncharted waters and the boss is not there to steer the ship. That could create a lot of problems, but that certainly wasn’t the case this week.

This week’s Monday Night Raw featured the fallout from Summerslam and happened to be one of the best editions of the show that I have seen in a LONG time. The show felt quite a bit different that anything Monday Night Raw had done in years and you could tell that there was a breath of fresh air to the whole thing. That was the case for a lot of reasons and we are going to look at some of the bigger ones this week. Note that this isn’t meant to be exhaustive, but rather the things that stood out to me the most.

The biggest change that stood out was the wrestlers were acting more like humans. How often have you watched a wrestling show and seen someone be so mad at someone else but then not be around for the rest of the night? It feels like they have done their thing for the week and are moving on with nothing else to do, even if the person they are mad at is right there waiting? That makes no sense and there is little logical reason for anyone to act that way.

We weren’t seeing that this week, as you had the opening segment with Becky Lynch being attacked by Bayley and company, which led to another attack later, plus another match and yet another brawl. All that took place in the course of three hours and all because people were mad at each other. There was a reason for them to be angry and they did something about it like human beings (ok maybe not normal human beings but it’s wrestling so give it some leeway). Fans are going to be able to connect to that a lot more easily than getting five minutes of story and then waiting until next week.

At the same time, the new way of seeing wrestlers motivated gave me a reason to care about these people more. Bianca Belair saw someone she respected, and who happened to be injured in the first place, attacked when she was outnumbered and wanted revenge. That is a basic story that someone can get behind and probably wanted to see where it went later. This time though, they had to wait about forty minutes instead of the 10,080 minutes they usually have to wait for the next Monday Night Raw. You can’t do that every week or the story will run out quickly, but every now and then it makes for a great boost.

Another change that was made was the focus on the United States Title. I don’t think it’s any secret that Roman Reigns and his big belts are not going to be on Monday Night Raw for the time being. With the World Champion nowhere in sight, Monday Night Raw needs something for the wrestlers who actually appear to do and it seems that fighting over the United States Title is at the top of the list.

This week’s show featured a video looking at the history of the title and how important it has been to so many wrestlers throughout the years. Then the show was partially built around a pair of triple threat matches, with the winners facing off to become the new #1 contender. That gave you six wrestlers fighting for one title shot next week, with the champion talking about how important the title match was going to be.

Look at how much you get out of just making a title feel important, even if for a night. Bobby Lashley is arguably the top star on Monday Night Raw this week and he had six people trying to be next in line for a chance to take the title. How long has it been since the title felt important other than in a one off match? It is another thing that is long overdue, but in this case it is something that is very important.

With no World Title around, the show is only going to be built around personal issues. Those can be great, but there is only so much that you can get out of having a show built around them. I’m sure you can have a title match here or there, but if it feels like the whole thing is built around nothing that actually matters, you aren’t going to get very far. Titles have been the thing that drives wrestling storylines for a very long time and that can be the case again, assuming one of the titles actually matters. Having a bunch of people trying to get a title shot will do that just fine, and now it seems that we are doing it once again.

Finally, and perhaps that thing that has me the most excited/interested is the lack of having anything significantly dumb on the show. There were some things that were a little less serious than others, but at the end of the day, the show had more things that mattered instead of going with goofy segment after another.

Think back to the last few months, if not years, of Monday Night Raw. The show has had quite a few goofy moments, ranging from Elias/Ezekiel/Elrod (ok maybe not Elrod, as he’s awesome) to that stupid golden egg mess to the mother of all of the goofy ideas (at least recently), with the 24/7 Title. The title has been around for a little over three years now and I can’t tell you the last time WWE did anything interesting with the thing.

No, instead you would get a bunch of people running in to take the title and the lose it again and again and again until the original champion came away with the thing. How many times have you seen them do just that, even if other stuff is going on? Heck a few weeks ago, a six woman tag was taking place when the usual band of idiots came out and took over the match, even with people involved pinning each other. That didn’t stop the match of course because it was a 24/7 Title match but not the match itself, as it was really the match taking place in the match. See why the Usos vs. the Mysterios sounds a little bit better this week?

It’s all about the ton of the show. Comedy can work well if it is done right and there is nothing wrong with being a little less than serious from time to time. The right kind of thing can lighten the mood and give the fans something fun at the same time. The problem is that WWE leans on it FAR too often and what could be a funny bit turns into something so ridiculous and out of left field that it is almost impossible to care any more. That kind of thing can have a place on the show in the future, but at least try to come up with something a bit more original for the next big gag.

Overall, this week’s Monday Night Raw felt a lot more serious than what we have been seeing lately, but it also felt like something that had the effort put into it to make things work. I have no idea how long WWE can make this last or if it was just a one off week, but I’ll take whatever I can get after so many years.

WWE is certainly changing and the flagship show needs to change with it. There are a lot of ways to do that and thankfully it seems that the company is FINALLY doing something with what they have. Options have never been the company’s issues but using their resources has been. It is overdue to use them but now that they are, it’s a whole new Game. 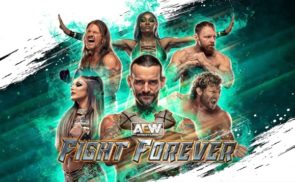