I know Star Wars Day was yesterday but this is a weird week in wrestling and I can’t come up with one thing to talk about. Instead there are a bunch of things I could talk about, but since I need to narrow things down a bit, we’re going to do something a little different this time. This week I’m going to do four mini columns, dividing the usual thing into fourths if you will. Did I mention I have a weak spot for puns?

In no particular order.

Let’s get the biggest deal out of the way first: a company the size of WWE sending the wrestlers their things in a trash bag (or something close to one) is a little ridiculous. It certainly isn’t the biggest injustice in the world, but a billion dollar publicly traded company obsessed with public perception should have known how this was going to look. The bags were inside a box in the first place. No one thought to, I don’t know, just put them in the box and find some other way to keep them from rolling around? That was never discussed?

Anyway, in addition to the whole visual of the trash bag, there is Chelsea Green’s story of receiving gear from Natalya, as well as possible Dana Brooke and/or Lana. This comes off as even more confusing than the trash bags themselves. Did WWE just go around to various areas, pick something up and assume that it was Green’s? Did no one find it strange that Green, who wrestled one match on the main roster, had several sets of boots and gear there? I’d love to have seen how that went, as it seems like more than a little ridiculous way to get rid of this stuff.

The whole trash bag thing is not some horrible situation or the worst thing that WWE has done probably even in the last month. Instead, it’s something that makes WWE look like a company that really does not think much of its wrestlers after they leave. That’s the kind of thing that a lot of companies are going to do, but how many of them act like WWE is some big family?

I would hope that a family member wouldn’t have their stuff thrown out when they leave home. Or that a company would think that letting a wrestler, especially one who they will put in their Hall of Fame one day, get to feel like trash when they were given their releases. WWE seems to be trying to fix their reputations, but this was rather trashy of them.

2. Rhea Ripley Is In Big Trouble

This is something that I’ve had to complain about multiple times now and yet here we are again, because this is how WWE works. Rhea Ripley debuted on the main roster a little over a month ago and won the Raw Women’s Title at WrestleMania 37. Since then, she has become little more than an afterthought on Monday Night Raw, playing at best fourth fiddle in the women’s division to Nia Jax, Charlotte and maybe Asuka and/or Shayna Baszler. That isn’t even considering Sonya Deville, who is now the evil GM to counter Adam Pearce’s good guy GM, as she is now there to promote Charlotte even more.

What was the point in bringing Ripley up? Other than just not wanting her in NXT any longer, she is now the latest person called up fro developmental to make an early splash and then come crashing back down because there are more important people to worry about. In this case, that would be Charlotte, who is once again the focal point of the division, because she only has been for the better part of the last six years now.

I don’t think I’m breaking any new ground by saying that Charlotte is great. She is a once in a lifetime find and can do anything asked of her in the ring or almost anywhere else. That’s all awesome and such, but enough of her being the focus already. Is there really nothing else that can be done with Charlotte other than having her get some story with Deville while being added into the title match again? We’ve seen this so many times now and this time it’s Ripley as the victim.

Charlotte may be great, but it’s not like Ripley is some joke. She’s a physically impressive star with a history of impressive matches and the resume to back it up, all at twenty four years old. Just winning the title doesn’t mean that much when you are being overshadowed by someone who overshadows everyone. It shouldn’t be this hard, but it keeps happening.

3. Get On With It Already

This is a rather specific issue for modern times and like so many other things these days, it is due to the Coronavirus. As you might remember, most promotions have had no fans in attendance as of late, and the fans that are allowed are in very limited quantities. It makes for a weird ghost town effect for a lot of the shows, but it also leaves promotions kind of stuck. The prevailing theory seems to be “wait until the fans come back” to do X, but how long can you really keep waiting on something?

Consider Major League Wrestling, which has Jacob Fatu coming up on two years as World Champion. Yes there was a long run of time with no shows, but how long do you want to go with something like this for the sake of having a reaction to the title change? The same thing is true of AEW, where Hikaru Shida is nearly a year into her reign as AEW Women’s Champion. It would seem that they are waiting for the title change at this month’s Double Or Nothing, but was there no option to do this earlier?

There is nothing wrong with wanting your big moment to draw money, but we aren’t in normal circumstances at the moment. It might be a good while before fans are back, or at least can stay back, and leaving these major stories and angles in a glorified limbo isn’t doing anyone any good. I’ve lost most of my interest in Major League Wrestling because it becomes pretty clear that little is going to happen until fans come back to the buildings.

This is something that you are not going to have to deal with in the future, but at the same time, it is not going to make that much of a difference if the promotions have lost so much of their interest just sitting around. It makes sense to want to make the most money possible, but you also have to accept that something needs to be done. We’re just way past that point and almost everything has suffered as a result.

4. I’m Sure They Planned This Out

This is similar to the Ripley issue, as WWE continues to not seem to have the most detailed planning. Prior to WrestleMania 37, the Hurt Business was rolling along as one of the best stables in recent WWE memory. You had four guys in the nice suits who could destroy everyone they came across. With Bobby Lashley as the monster smashing through everything, MVP handling the talking and Shelton Benjamin/Cedric Alexander as the tag team, the whole thing looked great.

Then Lashley beat up Benjamin and Alexander, kicking them out of the team and leaving it as just Lashley and MVP. Since then, Benjamin and Alexander kept teaming together for a few weeks before Alexander turned on Benjamin this week after another week to end their team. In other words, it’s another team that was perfectly fine and then they’re just done because….somebody help me out here.

This is one of the things that WWE does over and over and I do not get why. I’m sure Benjamin and Alexander will have a match, maybe even at WrestleMania Backlash, but I have zero reason to believe that WWE has anything important planned for either of them going forward. There is nothing in WWE’s recent history to suggest that taking them out of the Hurt Business and then splitting them up was anything more than a whim.

If WWE really didn’t have any plans for them after the split from the Hurt Business, why bother splitting them off at all? The WWE tag divisions are hardly deep in the first place so getting rid of a perfectly acceptable team makes little sense. There was nothing wrong with Benjamin and Alexander sticking around as Lashley’s lackeys and maybe getting back into the title hunt. But no, instead WWE’s grand wisdom is to not only kick them out of the group but split them up. Why you ask? Because WWE, that’s why.

It’s rather telling that all of these things are fairly negative. There are some positive things going on not only in WWE but in all of wrestling. The problem is that the negatives are so strong that they leave little reason to get excited about much of anything these days. Maybe they will get better going forward, but it really does feel like these companies, especially WWE, are doing things that make less and less sense every single week. Until that is fixed, we could be stuck on the dark side for a long time. 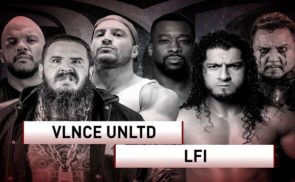