If you have watched any WWE programming in the last week or two, you will probably be pretty familiar with the news that the company is going back on the road in the middle of July. After more than a year away from fans or any location outside of Florida, it is off to Texas for a weekend of shows and then on throughout the country as things begin to return to normal. This is some pretty awesome news, but it does make me wonder what happens next on Monday nights.

Monday Night Raw has ranged from watchable to pretty dreadful to downright horrendous since the Florida exile began. There have been the occasional bright spots here and there, but there have been far more negatives than positives. Some of the storylines have been flat out stupid and there have been a lot of things that would not work in the greatest eras the company has ever seen. There is not much of a way around this and it has been pretty hard to watch at times.

But don’t worry, because the fans are coming back to save everything. Fans are going to be there soon to make it all better. It’ll all be fine when the fans come back. Just having some people around will be enough to make up for everything. The fans will bring the energy and atmosphere that will make all the problems go away. That’s all nice in theory, but then you start looking at this pesky thing called reality.

I’ve been watching WWE for over thirty years now and I’m not sure if I can ever remember a time when they have been able to stop on a dime and change everything about what they are doing. This company loves to be stuck in their ways a lot of the time and that has been the case for longer than I can remember. It is one of their greatest weaknesses and now we are supposed to believe that having fans back is going to make all the difference in the world?

If you look at WWE television these days, especially on Monday Night Raw, you can see things getting more and more stale every single week. We are now coming up on yet another Drew McIntyre vs. Bobby Lashley WWE Title match, plus Charlotte getting another shot at the Raw Women’s Title. That isn’t exactly interesting and certainly not original material, but we are coming up on both of them all over again on the way to Hell in a Cell later this month.

Just look around at some of the things that you are seeing on Monday Night Raw at the moment. We are looking at things like Alexa Bliss’ evil doll and Reginald as one of the centerpieces of the women’s division and Jaxson Ryker getting a singles push. That is the kind of stuff that is supposed to keep fans’ attention over three hours every Monday night? It isn’t keeping them watching at home, but now it is going to be enough to keep them buying tickets?

This stuff is not exactly made for a television audience, but it is really not made for a live audience. How many things could they just not air in person because they can’t use one of their special effects? Lily can’t bite at the camera and the Fiend (assuming he is even back by then) can’t do some kind of magic trick. WWE is going to be stuck with what they in the ring and on the microphone to keep fans coming back and I really do not know if that is going to be a possibility at the moment.

How exactly do you see these things being received by the fans who are paying their money for their first live events in well over a year? Come see Shayna Baszler lose to an acrobat and then yell at a doll? Or the same matches that you have watched on TV for months now? With Monday Night Raw’s creative department this terrible, it is about as bad of a time as it could be to start back on the road.

What WWE needs more than anything at the moment is a fresh perspective on Monday nights, or at least a better direction. I’ll spare you another long dissertation on Vince McMahon and Bruce Prichard being the worst things to ever happen to wrestling television, but it isn’t like things have been on fire as of late. The stuff they are doing isn’t good television and it isn’t going to be much of a live experience either. You can only get so far with the allure of Monday Night Raw being back in your town before the fans realize that they are seeing the same drek that hasn’t been good for over a year, but now it costs money.

The only thing that WWE fans can hope for at the moment, and it is likely quite the false hope, is that the company has some big burst of creativity and fresh ideas planned. Maybe they have a new direction waiting which could change everything all at once and hook the fans all over again. Money in the Bank is taking place over the same weekend as the relaunch so maybe it could solve a lot of the problems at once. A fresh idea that shakes things up could buy WWE some extra time, but do you really think they have a reason to believe that is going to be the case?

Keep in mind that this is the same company that came off of WrestleMania with its first significant gathering of fans in over a year and the big idea was to throw Charlotte and Braun Strowman into the same WrestleMania titles matches we just saw. That’s the height of their creativity when they have more people keeping an eye on them than at any other point of the year. How much better are we supposed to think it is going to be in the middle of July with Summerslam coming up?

The thing to remember here is that WWE is not going to have a big window to keep interest up. Fans are going to be excited to be back in the arenas for a little while, but it isn’t like WWE was on fire before the pandemic. You would get some good crowds for a few shows here and there, but how many pictures did you see from SmackDown with the seats half empty? And that’s for the show that tends to be the better received of the main two options.

WWE does not really have the option of coming out flat here but unfortunately that tends to be exactly what they do in a situation like this. When is the last time you remember the Monday Night Raw after WrestleMania being a hot show? It feels like WWE is actively trying to keep fans from getting too excited, so having WWE “come home” is not going to be enough to make up for all of the problems they are having at the moment (or for the last several years of moments).

WWE is going to have a little bit of a grace period when they get back on the road but that time period is not going to last forever. It is going to be cut down even shorter when fans do not see the most thrilling product in front of them, as they start to wonder why they haven’t been watching as much lately in the first place. SmackDown is likely to be fine, but Monday Night Raw is in need of a nearly complete overhaul of whatever it is that they are doing at the moment. The whole idea is going to give WWE a big bolt of energy for a little while, but then comes the question that has haunted them for a very long time: and now what? 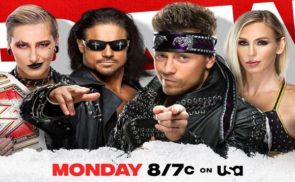