Hello again. Fyter Fest has come and gone and as was the case with Double Or Nothing, AEW continues to be the talk of the wrestling world. The show had a variety of controversial moments, both good and bad, with some nice action up and down the card. As it turns out though, there was one little cameo which took place later in the show that you might not have caught.

According to WrestlingInc, former WWE interviewer Dasha Fuentes was ringside for Fyter Fest as she accompanied ring announcer Justin Roberts to the ring and seemed to serve as timekeeper. Fuentes can be seen on the broadcast several times, including during the six man tag, though she was not acknowledged. She appeared for WWE from 2014 until 2019, working as a wrestler in NXT and then a backstage interviewer on the main roster.

It appears that Dasha Fuentes is in the house for AEW #FyterFest. She accompanied Justin Roberts to the ring when he came out before the pre-show. pic.twitter.com/W0XIDPpnyh

Fuentes did a lot for WWE. Check out an on site report: 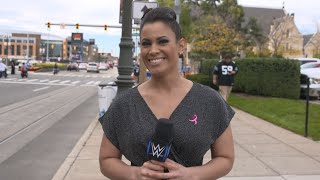 Opinion: This isn’t the biggest signing in the world but it is something that could provide a few benefits at a low risk. Fuentes was released from WWE due to a mistake during a promo so it’s not like she has a bad track record. Hopefully she can go somewhere with AEW as she was a talented performer in her role, so maybe this can be a nice new start for her.

What did you think of Fuentes? Will she be an asset to AEW? Let us know in the comments below.