The rise continues. John Cena may not be the most popular wrestler of all time but he is certainly one of the most successful. He dominated WWE for more than ten years and rarely had anyone able to hang with him for more than a short run at a time. Cena was a huge deal, and now he has moved on to Hollywood, where he might become a big deal all over again.

Superhero movies and television shows are still some of the biggest business in the entertainment industry today. There are so many different characters and stories to pick from that it is almost impossible to run out of ways to present the genre. Being in a big superhero franchise is almost a guaranteed move up the ladder in Hollywood and now Cena is doing that on his own.

According to Comicbook.com, Cena will be starring in Peacemaker, an eight episode series for HBO Max. The series is a spinoff from The Suicide Squad, an upcoming superhero film with Cena co-starring as Peacemaker. The new series will be written by James Gunn, who will write and direct the film. There is currently no release date for the series, though the film will be released August 6, 2021.

Cena can do things other than act. Check out some of his time in WWE:

Opinion: That’s a rather nice accomplishment for Cena, who is seemingly moving up the ranks in Hollywood fairly well. It helps when Cena has basically played a superhero in WWE for years and knows how to do this thing as well as anyone else in wrestling. Cena could be someone who could turn into an action star in a hurry and if that works out for him, well done indeed.

What do you think of Cena’s acting? Will he wrestle again? Let us know in the comments below. 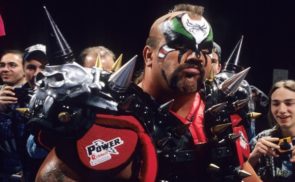